Saban-Dabo and NIL on the college game

I see there is a story in today’s news on Nil recruiting tied to Saban. Dabo has also been interviewed and he basically shares Saban’s comments. I realize it (NIL) is not perfect and not the best BUT the genie is out of the bottle and I take these comments as self centered. Both are elite recruiters and talent matters, it was ok when Deon Sanders did it at Jackson State but not right for the big boys. TAM is latest to twist the big boys tails. Nil will be a big equalizer in talent being spread around and those elite programs having the same success as they are used to will change as much as the portal has caused rosters to change. That is why you hear Saban and Dabo taking the approach they are taking.

What slime ball Jimbo and Aggies did is an embarrasment to the rest of college football.

I’m not convinced NIL will be a talent equalizer. If that’s what’s driving recruits, the schools with the most money (or perhaps the most generous boosters) will benefit. I bet Alabama & Clemson have plenty. Fortunately for us, so do we. Battles that used to be fought with facilities are now being fought with outright cash. I don’t see much difference other than facilities are harder to constantly upgrade.

NIL will help schools who used to play more by the rules than schools who never cared about the rules at all. I’m not thrilled with the complete professionalization of college sports, but as you said, the genie is out of the bottle. I’m a bit more concerned about the transfer portal and how it seems to be open 24-365. I understand the one free transfer rule, but not sure I’d allow more than that without some sort of penalty–sitting out a year or something like that. I also think if a free transfer in undergrad should perhaps eliminate the free transfer once a player graduates. I’m not sure I’d eliminate the latter, but I don’t like the idea of a player transferring twice consequence-free during 4 years of eligibility.

The story I loaded from the AP last night that’s on the front page of the site: 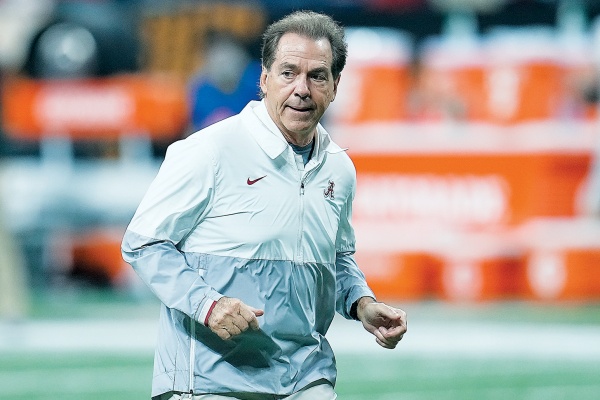 Nick Saban's willingness to adapt and often be a catalyst for change both on the field and off has propelled Alabama to 6 national titles in 13 seasons.

Arkansas seems to be ahead of the game on NIL and Transfer Portal. Consequently, we have benefited.

What happens when the rest of the big boys get serious about it?

It was always an arms race (those have never needed well in history) but using cash takes it to different level. It is having an impact on the blue blood programs as you would imagine ,they will adjust which negates any advantages but not every program will be as successful adjusting to it. The portal has been benefit of those elite players who will find a place but the majority that enter are not that fortunate. Would we get to point to pay players to leave??

Is a NIL option better in one state school like Arkansas without pro teams or better in states with more major colleges and pro sports teams if we are going NFL LITE some time in future?

Is a NIL option better in one state school like Arkansas without pro teams or better in states with more major colleges and pro sports teams if we are going NFL LITE some time in future?

Good question, but I don’t think it matters much. The State of Texas has all sorts of pro teams, but both A&M & Yew-tee have bundles of money and boosters with bundles of money willing to help their athletic programs. There might be some programs that benefit more than others for reasons we can’t foresee just yet, but as a general rule, I’d say schools with the richest most dedicated boosters will fare best.

Quite frankly, I agree with much of what Saban has to say. The current model is not sustainable, and the big boys absolutely will adjust. Matter of fact, wasn’t it Alabama’s current QB that received $1 million in NIL money last year?

I believe schools paying each player a set amount of money (NIL or otherwise) has some merit. And, please don’t give me the socialism vs. capitalism crap. I’m just trying to think of a way to save college football from itself. These are student athletes that are there to receive an education. Very few go on to play at a higher level. I also would like to see what the Aggies pulled this past year not become common place.

I also believe something needs to be done to “slow the portal roll”. It’s an absolute free-for-all that needs some boundries.

I don’t like the NIL as it is now, but a series of events led us to where we are. Like a lot of new things, I don’t think we know how this is going to look in 3 of 4 years except to say it will probably look a lot different than today.

My biggest concern as things are now, is that once the biggest of the big boys figure it out, there won’t even be scholarship limits anymore. To my knowledge, there is no requirement that the guy getting $1,000,000 NIL money to be Bama’s QB has to be on scholarship.

The purpose of scholarship limits was to somewhat level the field. As we know, Texass would offer a guy who they were 99% sure was never going to play for them, to keep him from going to Arkansas, or TCU or A&M, etc. Scholarship limits were intended to stop that. And it worked, to some extent.

I am also worried about (as noted by others) that once the big boys get this figured out, the rich will just keep getting richer (which we already have to some extent, Bama gets a top 1 or 2 class just about every year). We have boosters with deep pockets, but face it, we don’t have near as many as Bama, USC, Texas, Texas AM and many others.

I know cash is King most of the time, but I wonder whether factors such as early playing time, the big stage, a featured role in the offense or defense, and development for the next level won’t continue to play a role–maybe a big enough role to limit outright bidding wars to the exception. Those factors seem to come in play in the transfer portal; maybe incoming players will weigh them along with NIL opportunities.

NIL is self-limiting to some extent; if you’re gonna get the big bucks, you have to play and produce on Saturday. They’re not going to pay that kid $8 million to sit on the bench. And five-star QBs do get benched occasionally (Spencer Rattler and JT Daniels as two examples).

And five-star QBs do get benched occasionally (Spencer Rattler and JT Daniels as two examples).

For sure if a 5 star signs a deal before even hitting campus (does it work that way???) there is no way the deep pockets are going to know if he is going to play or not. They have a pretty good guess, but no way to know for sure.

But, does the NIL take that into consideration? Are they one year deals and the next year if you got benched, your deal will go way down or go away?

Seems like that’s something the athlete/agent/sponsor will have to work out when negotiating a deal. Will boosters be willing to pay $1M for a player’s NIL without any “performance requirement” from the athlete? Unless such payments are tax deductible — or they’re so rich they don’t care — any who do are taking a big chance. In any case, I think it was inevitable that the first few years of the new NIL reality were going to be rough (thanks NCAA), but an equilibrium will eventually be reached and we’ll still have college sports.

Thought boosters couldnt be directly involved since they directly contribute to said schools.
ok so they can get around that easy enough for now.