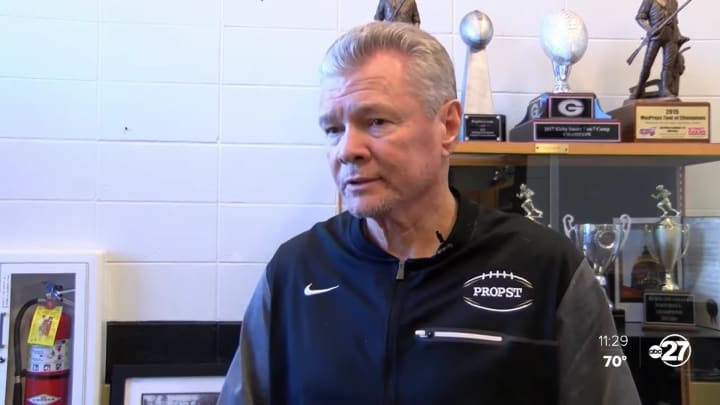 Why would Saban need to pay players? The championships alone are enough to get him all the 5-star & high 4-stars he needs. It’s a self-perpetuating cycle down there. I know Bama has a sordid history, but I just figured they haven’t had to cheat for about 10-12 years now. I want to see some solid evidence before I believe it. (Besides, the NCAA isn’t going to do anything to Bama.)

Not say he is or isn’t but if your competitors are buying, it makes sense you are too.

Pretty sure if you paid a couple of your best players, you’re gonna have to pay more of em. 19-21 year olds gonna brag amongst each other when it comes to that.

Maybe that’s the secret to Sabans resurrection of Coaches. Tricks of the trade.

LOL. Does that also apply to the Razorbacks Richard? Because I think it does. Lots on here don’t think the Hogs ever cheat at recruiting.

Rush Probst: A beacon of morality

A beacon of morality

Yep the whole lot of em

This goes back to the OU subject, the most heavily penalized team in college football history. If you’re ok with what the Sooners did through history, then there should never be a sour word said about all the current college basketball teams in serious trouble. It must be that these teams are like Jimmy Dykes says: “they just work harder”

LOL. Does that also apply to the Razorbacks Richard? Because I think it does. Lots on here don’t think the Hogs ever cheat at recruiting.

I suspect most understand how the process likely works and I am pretty sure this thread is a reaction to revelations from this particular situation, with no denials or professions of innocence by the Hogs or whatever. It seems you find a certain feeling of satisfaction of constantly ensuring the board is reminded of your thoughts on cheating whether it is needed or not.

If the Hogs are cheating, didn’t get money’s worth yet. Average star rating for FB recruits around 3*+.

Well, you’re exactly right. We haven’t gotten our money’s worth. Here’s the deal. Yes, I remind about cheating in college athletics because I know it happens everywhere, including at Arkansas. I don’t like the sanctimonious, “at least Arkansas does it right” statements because we know that’s not true. Arkansas is a big time SEC school. All SEC schools have methods or systems in place that enable cheating. Some are obviously more aggressive and outrageous than others. I suspect Arkansas is not outrageous about it. Auburn likely is, for example. As for OU, I don’t really care about its history of cheating. So what? OU cheats, Arkansas cheats, they all cheat. I don’t condone it. I just don’t really care. I only like OU because my daughter started attending there 4 years ago. Not a diehard OU fan by any stretch. OU has provided a nice diversion for me in the last 4 years because Arkansas has sucked so bad in football. That’s undeniable.

Link on Arkansas cheating, that is currently, not in the Broyles era.

It rubbed me very much the wrong way when you made statements about your perception of OU being this program that has it’s act together and knowing how to win. There level of breaking rules is a long and distinguished history. The means to an end have to stand for something. No doubt every school out there has skeletons in their closet for benefits to athletes, but surely everyone can see and recognize the ones who have gone above and beyond all others. We might as well have some posters on here bragging on Kentucky and Auburn in basketball. Oklahoma and Kentucky are 2 peas in a pod, just different sports.

I think back to a survey somebody did of people involved in college football recruiting. All the people responding were promised anonymity, but they did say which conference they worked in. One of the questions was “have you ever seen somebody make an improper offer?” One SEC guy said, “I work in the SEC. Of course I’ve seen people cheating.”

Well maybe you get what ya pay for to.
90k to 150k for top 4-5* players might be just a tad out of range here. Plus to pay again for some that come back instead of opting for the draft. Definitely pre-arranged deals. “If in fact that’s true” coming from a HS Coach accused of doing the same thing at that level.

Ok. But I can’t tell if you are referring to the Switzer days or the modern, Lincoln Riley era. Are you saying Riley is the football equivalent of Cal or Bruce Pearl, or even, in football, Switzer? Because I don’t really see that. Sure, I suspect OU cheats. But I don’t think Riley or even Bob Stoops have been shown to be on the order of magnitude of UK, Auburn, or 1970/80s OU football under Switzer. I like Riley and think he’s a good coach. He coaches winning football and did so during a time the Hogs were horrific. My daughter got there the first year he was head coach. Shoot me for liking Sooners. I don’t really care.

I will give Riley and Stoops the benefit of the doubt. I do not think what they’ve done is any worse than any of the top 2 or 3 offenders in any conference, would probably go as far as say not as much. But the mechanism for their recruiting has been so entrenched for so long it pretty much runs itself now. Plus they have been given keys to a Ferrari when others are trying to make do with a Chevy or Ford.