I have no idea what is happening with the search & I admit I’m a bit nervous that we haven’t announced a hire yet.

However, I’m amazed at all the hand-wringing & sky is falling responses to rumors about the BOT, HY, other schools, & the tragedies of who we are left with.

One thing I’m sure of: there will be some fans who will declare the next coach an unmitigated disaster within 5 minutes of the announcement. Several of some fans’ favorites are other fans’ “hell no” candidates. For some Kiffin is now a must hire & someone like Drinkwitz (sp?) means the end of the program.

Some are certain the BOT is sabotaging HY. Others think the BOT is not giving enough support.

Everybody is free to have their own opinions & react however they want to, but I’m gonna wait & see who we get. Then I’m going to support him. Like every coach, he’ll have to win. Next year he’ll have to show significant improvement over this year. But I’m not ready to call him a failure before the first game is played, much less before the first recruit is signed.

Could not have said it better…

But amazed at hand wringing?

You think we are fans of a U that has been remotely close most of last decade?

This call is so important.

I’m petrified while we say money no object one hand, we pay at bottom of conference on other.

And that seems to be what BOT wants consistently.

After all these missteps of program.

It is BOT I hold accountable and believe fans will as well - regardless of whether a LR reporter with few sources stands for 1960s and something that is long gone - to the detriment of the future that his home state wants more than its leadership.

How about we start some really outlandish conspiracy theory rumors. How about several members of the BOT are actual closet ASU fans and like nothing more than throwing a monkey wrench into any attempt the UofA makes to recover. As long as we are down they are happy.

I mean that’s no more outlandish than some things we’ve been hearing and a hell of a lot more sensible that some of the crap I’ve been watching on impeachment hearing. We seem to be living in the rumor generation. A sad time. So I might as well join in and spread some fertilizer and see what I can grow.

But hey, if you think it helps to be petrified based on the rumors you’re now hearing, suit yourself. I tend to think they’re just rumors & that we really won’t hire someone who just had a .500 season at Loser Junior College. We’ll hire someone who at least has a shot at winning here. We won’t know if he doesn’t for at least a couple of years.

Suprised at the hand wringing???

Remember the reaction when the ESPN ticker showed Bobby Petrino as the new head coaching at Arkansas.
Every Hog Fan was so, so enthusiastic about the future of the program.

Take a gander at the call-in shows reactios next week If/when a career TE coach is announced after a collective exhaling just 3 weeks prior to Chad Morris dismissal. 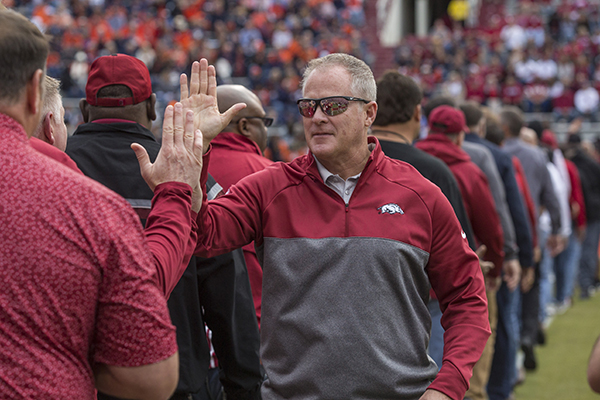 Yurachek: 'I have to get this search right'

Hunter Yurachek said Monday he felt the football program was moving in reverse, leading to the firing of second-year coach Chad Morris after 22 games.

If you have to get it right, and you hire a position coach from two failed regimes…the outlook just isn’t bright.

If that happens, do the hand wringing then. Right now, we have no reason to believe that’s going to happen. We only have some rumors & even those aren’t very strong. However, I won’t hand-wring even then. I’ll be disappointed, but not forlorn. But right now, the handwringing is over rumors & only over rumors.

I’ve put this cell phone down twice already to go to bed but keep picking it back up after a few minutes…hoping & praying some new information has come forth.

The FSU, OM, & UM sites are all on the same pins & needles and all with the similar coaching lists as us on their forum sites.

Hopefully BOT or $ were not overwhelming constraints placed on HY in this process. If so, we risk losing HY. Otherwise, I expect that HY’s hire will be unexpected and for sound reasons, same as Musselman.