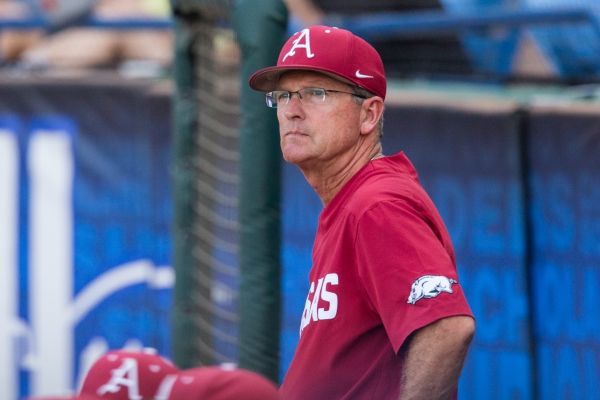 Dave Van Horn is waiting to find out what the new scholarship roster math will be like for his Razorbacks next season.

I’m wondering how this affects all of our SEC brethren as well. I know DVH has said this year was the year of great pitching, will some of those be lost to MLB? I’m thinking of Rocker and some of those great arms.

Whatever comes about from a combination of MLB decisions on the draft and how the NCAA manages this situation with eligibility and scholarships, the main impact will be on HS seniors right now. There are some who made choices to attend Arkansas because they were told they had a chance to get on field right away. The reason, there were guys that were leaving for the draft. Now, those players may come back and you have a 50 man roster. So why would a kid, who isn’t a 1st or 2nd round guy but maybe a 3rd to 4th round guy who gets offered $750,000 plus full scholarship MLB money, not sign and go to play professionally and get AB’s if they run risk of coming to school and get only 50 or fewer AB’s? Same with incoming pitchers, they would begin development and not lose a year sitting behind an upperclassman that was probably going to be gone and now returns.

I believe there are some in the 2020 class that may now seriously consider that situation where before they would not have. There is a lot of logistics that need to be worked out within the next 4-6 weeks so that the draft eligible players can make sound decisions and still give college coaches a chance to manage the rosters. DVH may have to tell some of the kids they don’t have room for them as well. That happens every year but could be more impactful on incoming freshmen and JUCO players. Know this, a high level HS player isn’t coming to a school with a 50 man roster when they can sign for very good money and get development playing time right away in pro ball.

Know this, a high level HS player isn’t coming to a school with a 50 man roster when they can sign for very good money and get development playing time right away in pro ball.

Arkansas has often had 50 man rosters in the fall. It is part of the reality of NCAA baseball.

That’s fall. I am talking spring and it is a real possibility. You do not have to agree with my opinion on this but this is a very real situation and most of the HS seniors who are on that edge of the draft that I referred to will consider pro ball now or coaches will have to tell some commits they won’t have room. Coaches want their top recruits and if they don’t make plans for this they will underestimate the situation. Again, my opinion.

I have faith that DVH will do his best to put forth the most competitive team he can…as usual.

It’s really nothing new in terms of the puzzle he has to work out each season.

At times, he has made the tough decision to take 3 years of a recruit and have a journeyman move on.

If the college kids can’t get drafted how would the hs kids have a choice?

They would sign, in most cases for less than before, since they wouldn’t have as much leverage. They would also go to JUCO

My understanding from reading Kendall Roger’s tweets is that if there is no draft there isn’t currently a work around for these kids to sign pro contracts because of the MLBPA’s CBA. Again, this is just my interpretation of what he was saying.

High school kids are not going to get drafted either. I see juco ball being a destination for many of the high school players who thought they were going to be drafted. The nice little signing bonus for a high school pitcher who throws 95 isn’t going to happen this summer. They might be in juco ball – or every high school player you signed in the fall (and thought might sign pro) suddenly may be in your lap if you are a high DI. They may want to come to school now and you don’t have money for all of them.