He was a phenomenal prayer, very clutch. not a whole lot of highlights but still worth every second. 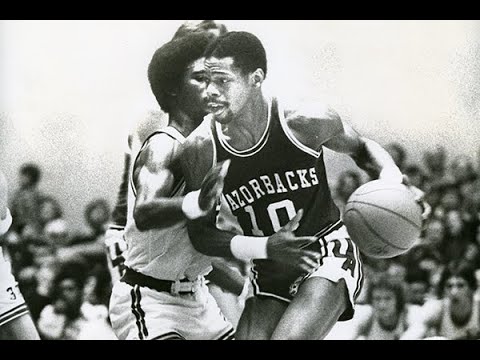 Some exciting times against some really great teams! Kicked butt to.

He was so smooth. You always felt good when the ball went to him unless you were with the opposing team.

He’s in my top five ever.

I well remember the final shot against Notre Dame. He was so casual, I was afraid time would expire before he got the shot away. But he timed it perfectly, of course.

I was at a game in Barnhill as a student, I forget who we were playing. Brewer was in-bounding the ball from just inside half-court. He was attempting an ally-oop pass to Moncreif or Delph at the goal. And Brewer couldn’t help himself, it went in without assistance from the player on-court. Of course the basket didn’t count but it was a great play by The Boot nonetheless!

In my book, in my years of watching, Ron Brewer and Joe Johnson have been the most all-round skilled players to wear in a Razorback uniform. And they are native Arkansans. I have not seen anyone better. Hope someone comes along that is better than them.

Pj, as far as skill, I agree. However, if you throw in heart and desire, no one matches Monrief.

If I’m starting a team with former Hogs, my top picks would be Moncrief and Corliss.

I remember while Boot was in San Antonio, George Gervin, who was always their go-to scorer, missed a few games and they plugged Boot in as their shooting guard in Iceman’s absence. Darn if he didn’t average about 40 points a game while Gervin was out.

Yes, I am talking skills and talent only. For the heart and sheer will to win, no question Moncrief is the greatest.

It’s hard to look past Marvin Delph as far as talent as well. He didn’t have to handle the ball because he had Brewer, but he could. If he had decided to play in the NBA there is no telling how long he would have played and how many points he would have scored.

I thought Lee Mayberry was incredibly talented, too. I saw him play as high schooler and it was incredible what he could do if his team needed it as far as offense. Rarely did he try to be a scorer in college. He just set up Todd and Big O and played defense.

Delphs Highlights will be coming soon. I agree about Mayberry he was flat-out unbelievable and was the ultimate team mate that sacrificed a lot of his potential highlights for the betterment the team.

My favorite hog in any sport, of all time

Boothead. So great. Those Triplet years were unreal.

Memory has slipped me maybe. But how did Brewer get the nickname - The Boot or Boothead?

“Because when I was little, my head was shaped like s boot.”