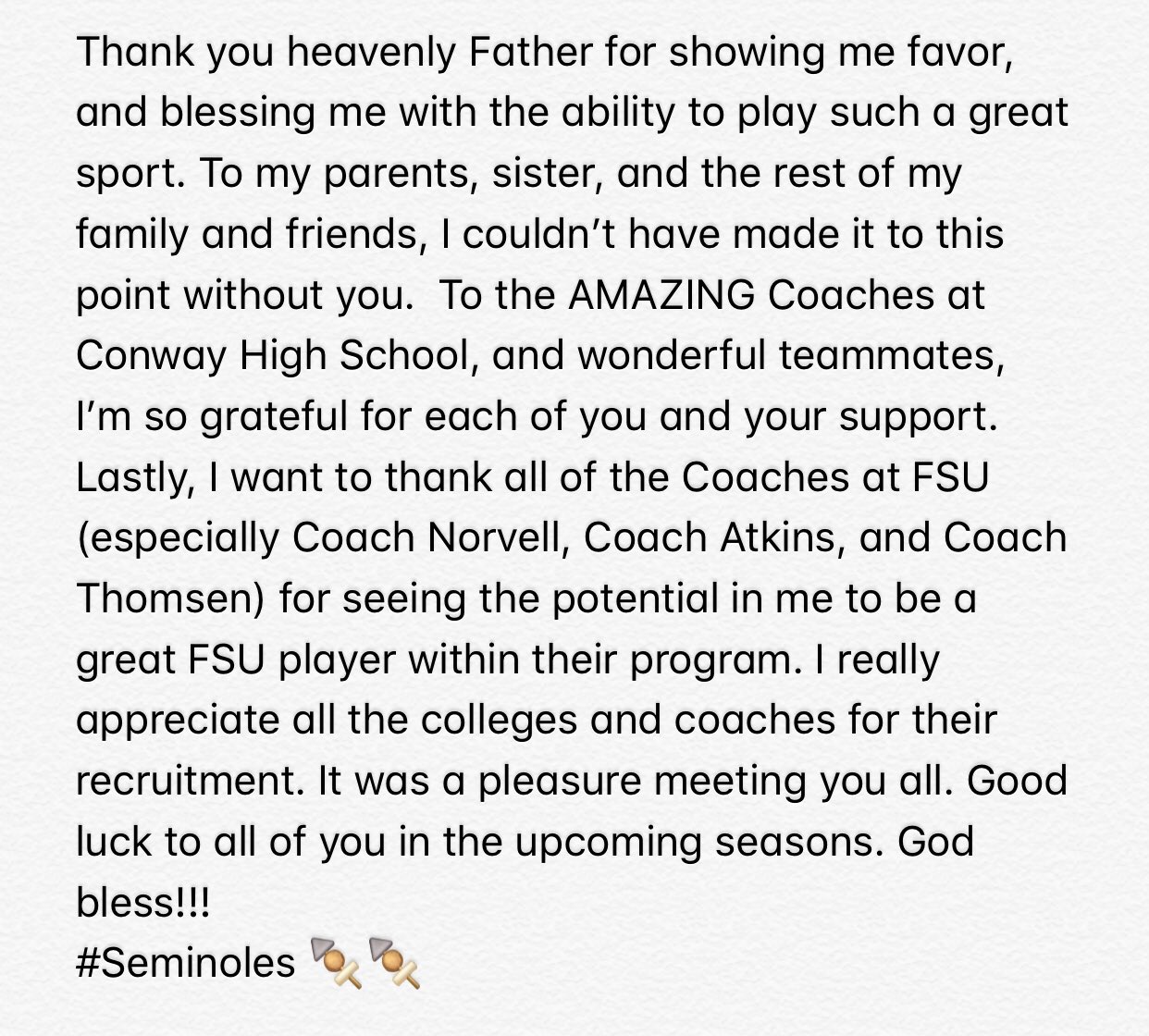 Well dang, that sucks, but seems like he wudda been a prime candidate for the portal at the 1st sign of not starting or given a stern motivational talk

It sucks he’s going to FSU, but like Pitt says he wants folks who WANT to be here.

I wish him the best. Great kid.

Not trying to talk bad about the kid, just never felt he was SOLD on Arkansas & if he came here it wudda been a business decision only because of Pitt/Davis coaching & not a LOVE of the Razorbacks.

Hope he has a happy college experience in the swampy, crime laden city of Tallahassee

I’m feeling the love in the air.

I hate it, but Stevie Wonder could’ve seen this coming. The kid signaled that pretty strongly in his interview with RD. Oh well, he’s not the first kid we’ve lost to an out-of-state school. Seems like we’ve lost at least one going back as long as I can remember. Even Broyles lost some.

Coach Broyles lost one now and then. In today’s world, the loyalty for a home state and school is not as strong as it was 50 years ago. There are many reasons for this…too many to delve into, but it has increased the percentage of kids going out-of-state and not becoming Razorbacks. We don’t have a lot of D-1 football recruits, so it hurts to lose those kids.

A young lady who worked for me always had an “at least” for every negative event…I can hear her saying, “Well, at least it’s not ole miss!”

Maybe beating a dead horse here, but how can you lose sumthn you never had?

From all reports, he never wanted to be a Razorback!!!

Maybe a great kid & good luck to him, but like Mr Brashear said ya gotta “care”, Scott appeared to not “care” about Arkansas from what was written JMVVVHO!!!

Well darn, was hoping he would fall in love with the Razorbacks. We wish him well at Tally. We need to close strong on whats left, Henderson & St John or hold those ships for tranfers.

I would be disappointed if he wanted to be a Razorback and wasn’t offered! It’s his decision just forget it. I’m one of the old folks that wants to see the players hit the field that WANT to be HOGS!

Oh well. life goes on and I get it. It was totally RS choice and he chose what he felt best for him at the time, np. BUT RD, I’m a little more dis-heartened from the comments you made yesterday almost claiming that RS was automatic to be the next Razorback onboard.I’m very appreciative along with others in your diligence and hard work supplying valuable info to Razorback fans and again personally, I thank you. I’m curious as to what prompted you to make such a statement that R S was all in?

UofA may be an easier sell to out of state recruits vs the in staters. Many Arkansas kids see UofA a continuation of the rest of the state while out of staters see NWA & UofA campus as a unique college environment to enjoy & experience college. At least that is how many of the DFW kids considering UofA view Fayetteville.

Loyalty to the state schools is not what it used to be unless family also went there. Once UofA football improves, Arkansas kids will view UofA more favorably. The excitement of football has not been there for many years but believe CSP will change that.

Where did I say that? I just posted the story.

I agree totally! I think he took the visit to Arkansas just for show. And that’s alright because it’s his decision, but don’t waste other coaches time when you never had any interest anyway. Good luck at FSU! Now our coaches can focus on players that want to be here!

At least he gave us a look & the courtesy of visiting UofA before making an announcement, even if he was heavily leaning FSU. Otherwise, fans would be saying he did not even give us a chance. Who knows, he may decide to portal back to UofA someday if FSU does not work out for him, same as Luke Jones did from ND.