What’s your opinion on the caliber of player on average we are on for football recruiting right now, compared to normal? Seems to be what I’d say is the lowest caliber I’ve seen since I really started keeping up with it, about 6 years ago.

Curious as to what you think.

If you’re talking about rankings, just look back at some of the past recruits that started out with low rankings and later were elevated.

Without camps, spring evaluation and spring games, I’m not sure if they’ll adjust rankings or not like they usually do.

FWIW, there’s a 4-star fans are excited about but I’m told Arkansas isn’t that high on the recruit. Beauty is in the eye of the beholder.

There’s a 3-star that I think Arkansas will get that Arkansas LOVES.

Right, I expect a lot of them will increase their rankings, but many are 800+ ranked on average, so even an increase would still leave them at a mid level 3 star. Several 1000+.
It’s a unique year, especially with no camps. So I hope they are good with their evaluations.
Just seems like there is very, very few 4 stars we are even after. Offer lists also have been a little concerning, but it is only May, so we will see how that progresses.

I remember seeing Terry Wells’ video for the first time and thought he was very talented big guy. He has very good feet. I think he has a chance to do very well in college. 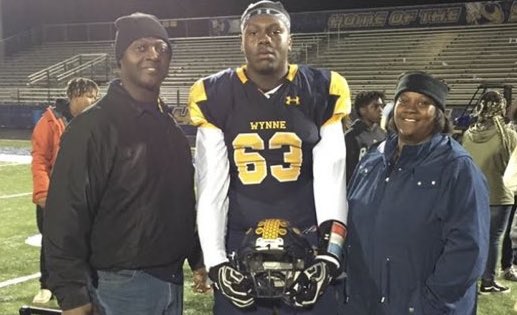 Landon Rogers is rated right as a 3-star but he’s a 5-star in potential. I don’t say that lightly. Strongest arm I’ve seen in person.

Cole Carson is another one they love whether he’s a 3-star or 4-star.

Marco Avant is rated right but he’s another that has a chance to develop into a very good player.

We are set at the QB position for a while! Jefferson and Hornby both have great potential and Rogers has off the charts potential!

That’s what it appears.

Rogers is someone who definitely stands out, he has elite athleticism for sure.

Hornsby is your QB of the future, unless Jefferson really improves this year. All these guys should take step forward this year working with Briles. Hate that we didn’t have spring ball bc Jefferson needed the coaching on his fundamentals.

You’re never set on any position, that’s why you recruit someone to take their place every year.

I totally agree! Is absolutely perfect for this system… he is very raw and will need this 1st year to understand the speed of the game and put on about 15 lbs… he has a very bright future

We have three very good prospects at quarterback that’s far better than we’ve had in a long time. We are easily set at this position as any on the team, other than receiver.

As long as they all end up being good, it does appear we have some talent there for the first time in a while.

It is easy to be excited about the future of Razorback football with the level of talent being brought in at the QB
position. Gifted young players and a highly successful
senior QB to lead the way.