Richard/Dudley please pass on this name to CSP 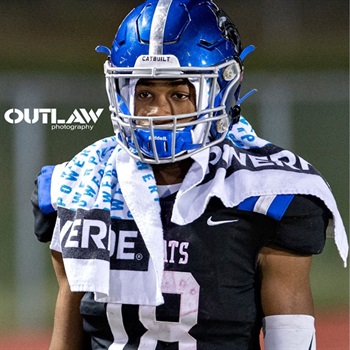 This kid can absolutely fly! Runs a 4.31 40 has an offer from Mississippi State and several others but it’s definitely flying under the radar because he plays in a private school. I coached at the school from 2015 through 2017. And they play in a very competitive league. definitely be someone we should look at

Thanks. They’re aware of him

Ok that’s great because he comes from the same league at jerrion Ely who made such a splash at Ole Miss this year.this kid is just as good an athlete as ealy is he’s just flying under the radar big-time just got his act of 19 past I believe…

Man, this team needs to upgrade team speed in the worst way.

I know one of the coaches on his team he says he’s a very hard worker and is not attached to anyone at this timThe kid just wants to play and I can tell you right now this kid can fly!!he is every bit as good of athlete as jerrion ealy who I saw on the field for 3 years and who made a huge impact for Ole Miss has a true freshman this year and played in the same league,he has just flown under the radar I think it might have been because of this act.He would be listed as an athlete,he is not a QB at all but had to play it when their QB got hurt,but he would great the way Briles spreads out WR and gets them one on one.

Yes! Offer him yesterday. 5’10" - 180, is even good size for a running back who is a senior in H.S. Can probably put on another 15 lbs of good weight. It’s also fine for a slot receiver and perfect for a kick returner. If his ACT and grades are OK, I can’t imagine what we are waiting for, especially with our need for speed.

Yes take a long look at him quickly! Is that an oxymoron

Kid can do it all, incredible special teams weapon, has very good hands and elite speed,if he was playing in higher classification football he will have offers from all over. I would really like to see us offer him and I believe we could get him according to my friend who still coaches there.He just looking for a place to play and willl go wherever he can. Mississippi State I believe is the only SEC School to offer and several others from smaller schools in the group of five. Originally from South Carolina

Grades are the issue… most likely, and grades have failed many athletes. My son didn’t take grades seriously enough and he plays sports, no more. Got to work the class room.