Richard as we are now in December.... who you like

To finish off the football class ?

I think they hope Cameron Ball jumps on board the 16th and then look for transfers.

Is the fact that Pittman is getting so much out of his current players resonating with the recruits, or is it not much of a factor right now? I can imagine it might resonate more with parents and guardians than recruits. Is this the case?

Thanks for all of your hard work—you and Dudley.

I agree that Arkansas looks good for landing Cameron Ball.

I asked Coach Pittman a couple of weeks ago what he would like to finish up the class with in terms of players and here is what he had to say: 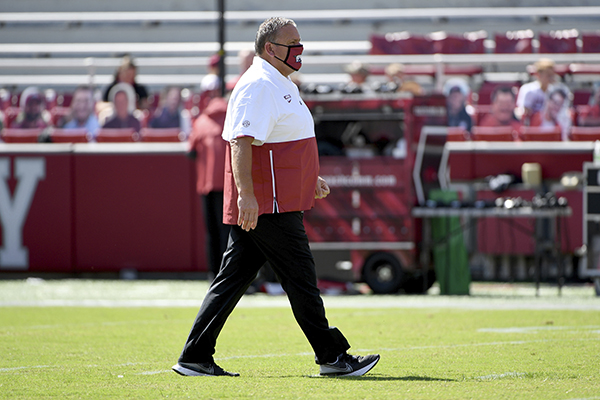 Pittman knows some recruits will be sight unseen

As a veteran coach, Sam Pittman has seen just about everything when it comes to college football recruiting.

Cameron Ball and Je’lin Samuels on the D-line.

I hear Wright the WR at A&M is unhappy, who Arkansas recruited very hard last year.
I think Justin Steeps works his magic once again.

A grad transfer QB for competition and depth behind Hornsby.
I think Malik Hornsby will be the starting QB next year. I don’t believe the Arkansas Coaches are satisfy with the back-up QBs

Not saying he won’t be, but just curious why you are giving the nod to Henry?

Because the new staff recruited him and the old one recruited KJ?

I would certainly look into a transfer. You should try to over-recruit the players that you have on campus in a quest to be better than you are now.

Is there zero chance that Franks comes back? Seems to me he’s kind of borderline as an NFL prospect although his play this year has probably bumped up his stock; Walter Football, whoever that is, has him as the #14 draft eligible QB. Baseball is a pipe dream; he hasn’t played in more than five years due to early HS graduation.

Hard to know what he’s thinking. I think he’s gone but if he’s not pleased by what he’s hearing I could see him coming back.