Remember when we couldn’t recruit to
Arkansas because Fayetteville was a remote city in a small state, with no diversity in the population, with a small airport, you name it, whatever excuses, justified or unjustified, were made by fans and some coaches? What happened?

We have overcomed some of those pretty well but nowhere near enough, yet, to match the upper half of the SEC-------------------yet. They were and still are somewhat true issues that make it harder but certainly not impossible to recruit at a high level. Beating a hated rival unmercifully on national TV with a crazy wild crowd is a big boost. Go Hogs.

Our state’s population of 3 million with less than 20% African American is a bigger issue for us. Louisiana with twice our population and twice our percentage of the minority that supplies the top sprinters and athletes in the world means that is four times our numbers and, surprise, Louisiana produces over four times the top recruits that Arkansas does.

Walmart, Tyson & Jones. A top law firm in the USA.

Our state’s population of 3 million with less than 20% African American is a bigger issue for us.

With Arkansas expected to have minimal population growth & a shrinking number of college eligible students over the next few decades, we need to look elsewhere, perhaps TX, if seeking top SEC quality recruits.

Still pretty remote as far as getting to Fayetteville. People often have to fly into Tulsa for decent airfare. Big disadvantage there.

Not a lot has changed regarding the “excuses”.

The 2 biggest recent changes have been an up upswing in local (Arkansas) talent and a coaching staff that can recruit well enough to overcome certain disadvantages.

According to statista.com, Arkansas’ projected population in 2040 is 3.22 million, which is pretty minimal growth. But I’m seeing a lot of states like that, with growth of 10% or less over the next 20 years. Not Texas though; projecting almost 35% growth.

Projections of slow growth in AR population & decline in in-state college eligible students prompted prior UofA Chancellor Steinmetz to freeze the enrollment at the current level (approx. 28k) & not allow it to increase, despite high demand from No. TX high school students.

They would need some significant infrastructure investments (classrooms, dorms, parking, etc.) to go much beyond 28K no matter what the population projections are. And they just don’t have a lot of spare land or money to build stuff on it.
Steinmetz could have said we’ll do what Alabama has done and load up on out of state kids. Bama’s freshman class this year was almost 8,000. Less than 3,000 of those were from Alabama (no we’re nowhere near that high). 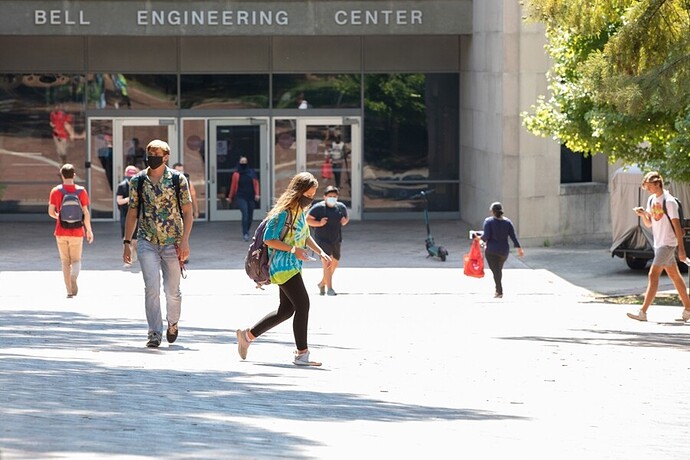 The U of A is expecting more than 29,000 students, setting records for total enrollment, new freshmen, transfers, and Arkansans in the incoming class.

Bama’s enrollment has increased more than 50% since Saban arrived. Not a coincidence…

Although, looking at UA’s 2007 enrollment, so has ours.

With current low interest bond rates, cheap funding is there for improvements & expansion, most of it paying for itself. There is land on both sides of Razorback Rd & north of MLK. Relocating the law school there & using current law school for ungrad core studies has been discussed. New high rise dorms with underground parking just north of RRS have been considered. Private student housing near Baum is also now providing some dorm relief.
Unsure if UofA will remain firm on their 50% limit on out-of-state students. UofA benefits from increased enrollment & from out of staters who subsidize in-state students (even with the academic tuition breaks), reduce per student fixed costs, increase academic standing when UofA accepts top performing students, attract outside private & govt research funding, & increase the alumni base that in turn benefits UofA over the long run.
Many argued against rapid UofA growth during Gearhart’s tenure, but it has obviously benefited the UofA.
AL, OM, & other SEC schools are aggressively offering significant in-state & scholarship $ to TX students in efforts to compete in growing their enrollment.
Assume that some of UofA’s current enrollment increase to 29k is in part due to 2020 HS grads who postponed their enrollment during the worst of COVID until Fall 2021.

Yeah UA housing put my son in apartment near Baum 10 years ago because they were out of dorm space. More since then.

With current low interest bond rates, cheap funding is there for improvements & expansion, most of it paying for itself.

With the current trend of online classes, the big issues with student loan debt, etc. I don’t think it is a great time for most colleges/universities to spend money on physical plant.

I personally wouldn’t trade my college years and law school years of living the “college life” (I was not much of a party person, for me it was just the whole being away from home college experience, not parties) for saving money and doing things online, BUT, the cost of education has gone up SO much in the last 30 to 40 years, it really isn’t the same math.

UofA was13k to14k when I was there in the early '80s so you were there about the same time. The campus, stadiums, & NWA are much different today, & I have cherished every trip to campus this past 4 yrs to visit my son who graduated there in 2020. Unfortunately not easy finding a house there.

Disappointed my son was at UofA during the CBB & CCM drought years & did not have an opportunity to be at RRS this past Saturday night. That was an amazing game & once in a lifetime experience. Even my fiance who is LSU was crying afterwards due to being so excited for Arkansas that night.

Hope UofA allows enrollment to grow as it is a better campus/community atmosphere. After time on campuses at ut-Austin, aTm, & UH, UofA is comparatively small. There is a huge demand to go there by kids here in Plano & DFW & disappointed to see so many incentivized to go to Ole Miss, Auburn, etc.

With the current trend of online classes, the big issues with student loan debt, etc. I don’t think it is a great time for most colleges/universities to spend money on physical plant.

There is still a endless # of kids here in DFW whose parents can afford & expect their kids to get an on campus education & without student loans. Kids & adults who take on-line classes here are usually attending the local TX community colleges & universities. That being said, it was not cheap sending my son to UofA, even with the academic tuition breaks, & much more expensive than my years there even with me paying out of state tuition.

That being said, it was not cheap sending my son to UofA, even with the academic tuition breaks, & much more expensive than my years there even with me paying out of state tuition.

My oldest went to UCA, no scholarships. Ouch. I paid a LOT. But he doesn’t own anything on his undergrad or his masters (masters came from UofA). Second son went to UofA on full ride. All I had to pay for him was a little spending money (they even gave him some spending money). Thank God for his scholarships, if I had to pay as much on the second son as the first, I would be broke!