She was the feature twirler for the Razorback Marching Band. She has continued to compete in twirling competitions. This video is from the US National Baton Twirling Championship. WOW! 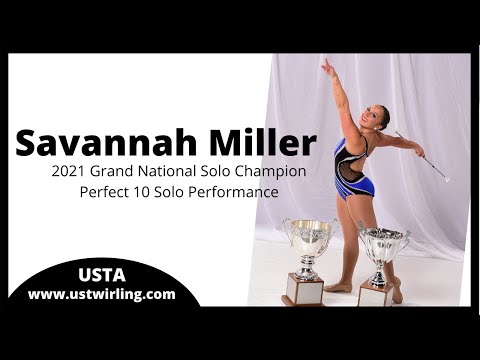 Awesome. Thanks for linking.

Sad for the state of Arkansas football that season, but so true. She was so good, that at times, I thought, c’mon that’s not even possible.

Crowd left after her halftime performance like the band parents at a high school football game!

I hope UA invites her back for an encore performance…what an unbelievable routine.

I didn’t think I’d ever say anything like this about twirling but that may be the most amazing performance of any kind I’ve ever seen!

She’s amazing! I think she might be a ninja.

Imagine how many hours it took to train her muscle memory to achieve such a feat.

so, I finally watched that video. WOW! chill bumps. and she didn’t even twirl 3 flaming batons, that was my sons’ favorite routine. thanks so much for posting this.

I don’t know what you call those (after throwing the baton straight up) rotating whirly bird gyrations standing on one leg and then catching the baton BEHIND her back, but she must be at or above that record if there is one. I think she did six on that last one. Then she twirls the baton with her elbows, forearms, chin, and armpits. (“look maw, no hands”) Just amazing and she was a joy to watch when she got that perfect score. Thanks for the video!

I just rewatched it again and it was four rotations, not six, but she did it twice and both times she adjusted her position as she rotated to be where the baton was going to land. Amazing.

I am no “Scientific Rocket” but I am quite sure that several of those moves broke several laws of physics!

I wanted to let you know that former University of Arkansas feature twirler Savannah Miller will represent the United States in the 2022 World Baton Twirling Championship, August 4-7, in Turin, Italy! The competition will feature 250 of the world’s best sport baton twirlers from countries around the world, including the U.S., Canada, France, Italy and Japan. These elite athletes will compete for bronze, silver and gold medals in the twirling equivalent of the Olympic Games.

Miller, who graduated from UA in 2019, is one of the most decorated baton twirlers of all time. She earned the silver medal at the 2018 World Championship, and after a delay caused by the COVID-19 pandemic, has her sights set on gold in 2022!

A brief news release with more information is below. Please contact me at 303-349-7267 if you would like to do a story with Savannah before she leaves for Italy. I can arrange an interview and provide high-resolution photos and videos from the U.S. National Baton Twirling Championships.

Thank you so much for your consideration!

I would like to give her some fly rods and watch her cast. I know it would be amazing. I guess she would figure it out in a hurry.

I’ve been attending Razorback games since 1972. Savannah made me stop leaving at halftime. She was amazing. I can’t tell you how many people I pointed her out to during halftimes. She was absolutely amazing and a joy to watch. I wish her all the luck at the competition(even though she won’t need it). She’s the best I’ve ever seen by far. Go Savannah, kill it at the World Championships. I have no doubt she will make us all proud!

we sat in the south end zone her last 2 years, and had a nice view of her shows. never missed her, she was amazing. she was literally the best part of some of Chad’s games.