Reggie Chaney is in the transfer portal 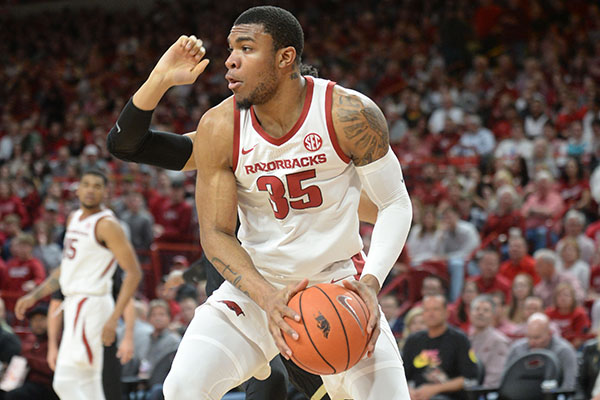 Hope this works out for Reggie. He was the player I was most excited about in his incoming class a couple years ago. shows what I know, lol.

He certainly has the ability to be an 8 point, 8 board, 2 block guy at a solid program, and then make money somewhere, if he applies his God-given abilities.

Further confirmation of my guess that IJ is coming back, although it appears Muss is continuing to mine the portal in case he doesn’t.

May end up seeing him this year… Wouldn’t be shocked to see him at Tulsa.

I honestly think it’s for the best for him. He needs to find a place with more playing time, and he needs to go to a place where he can continue to grow at his pace. That’s just not here. Best of luck. I always thought he played hard.

That stinks. He was one of my favorite players.

He’s a pit bull of a player with tons of talent. Needs to go somewhere with a tough coach to keep him in line and keep his frustration level low. Has a lot of growing up to do. Best of luck to him wherever he goes.

Wish him the best. He has the spirit and talent.

The talent and ability of Reggie Chaney is just pretty obvious. I agree it may be best for him to transfer to a place where he can get more playing time and just time to grow into the game. It is disappointing to see him go, but maybe he will bloom into that player a lot of us think he could be.

I hate that but I could see it coming with the people we are bringing in… he has talent he’s just got to do a lot of work on his game as far as scoring and handling the ball… I wish him the best.

So the only players left from Coach A’s tenure are 3 charter members of the Hog 5. I love the fact that we are loaded with great Arkansas players. It gives me a lot of pride to see a fence being erected around the state. I can not wait to see this team play! Go Hogs!

Inconsistent effort for whatever reason plagued his time with the Hogs. Talented enough just needs the light to come on and push himself to be the best he can. Had high hopes and caught glimpses of his potential, wish him the best. WPS

Didn’t want to lose Chaney, I thought it would be Henderson going.

If Chaney was considered an inside presence, it was lost on me. I never saw it. It’s not like he was blocking everything or was automatic on the post with the ball. Quite the opposite really. Defenses just sagged off of him, because he never, in 2 years, developed a handle, jumper, or go-to move. If anyone had to go, he was my pick. Everyone we have left is a better scoring threat. I love the makeup of this team going forward, and I bet Muss is frothing at the mouth to lace em up.

Please don’t let it be lost on you that Henderson is an Arkansas kid that has played with many of these guys for years. If the light comes on for him, he can help us.

Agree if the light comes on for Henderson. It came on a little late in the season. Nothing is lost on me here.
Chaney played more for a reason.

I thought Chaney would have played a big role last year but the lack of discipline on and off the court prevented him from getting into game shape in time for the SEC slate.
I hope he finds a place to play and is able to earn PT. He wasted a year!
Henderson has talent too maybe he can develop and stay in the right place on Defense.

People keep saying that light came on late last season for a Henderson. But didn’t he play just as well in the two NIT games last season after Gafford decided not to play?

I am of the opinion that if Henderson was given a chance to play in the non-conference season, he would have built on his NIT play and could have been a factor throughout the season.

I think long term, Ethan will be a better player than Reggie, so if you can only keep one if them, Ethan by a slight edge.