Arkansas will play its Red-White game inside Barnhill Arena on Oct. 5. 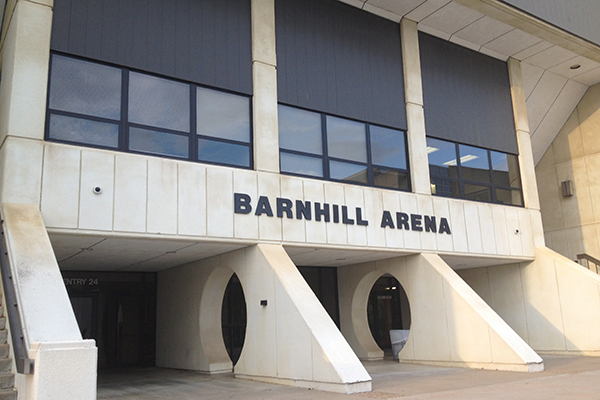 GREAT IDEA! Wish I had thought of it.

Hopefully they can go full Hog with the Band, spirit squads, etc…and make it feel like the old days of Barnhill…so many cherished memories there.

Arkansas will play its Red-White game inside Barnhill Arena on Oct. 5.

I’m sure going to be there. Isn’t there a little worry that, with a new coach and several new players, there may be more than 8,500 show up for the game?

I’m sure going to be there. Isn’t there a little worry that, with a new coach and several new players, there may be more than 8,500 show up for the game?

I’d be surprised to see it that full. Red-White games have not drawn well in years, I think in part because they have been scheduled against some kind of football, either high school or the NFL. I think basketball diehards will be there, but I figure many will be as interested in watching whatever the college football game of the week is at that time. And having it on an open weekend for the football team will decrease the number of people who might otherwise attend from outside the Northwest Arkansas area.

Red-White games have not drawn well in years,

Just curious, but do you have the approximate attendance to Mike’s first red-white game? I don’t expect this game to have the same level of excitement as Mike’s first red-white game as head coach here. I do think though, there will be more excitement than say, in the last 5-6 years. Since I live in central Arkansas, I’ve not gone to a red-white game except when it was on a Friday night followed by a Saturday home football game. I like the 2-day stay over in Fayetteville that creates. I did that several times when I lived in VA Beach and Florida.

According to our story from that night the game drew 3,300 in Mike’s first season. It was played on a Sunday.

Thanks Matt. Wow, I’m shocked. I’ve always been a college basketball fan1st and football fan 2nd. I thought Arkansas had a lot of “us” since Nolan and Eddie, but I guess not. That season, though, if I remember right, football was running high with Petrino at the helm while basketball was at a really low point for about 8 years.

Hopefully the crowd will be larger than recent years. A thought- since all are still alive: how about players from ‘78 final four team- Counce,The Triplets etc coach Team Sutton and some of Nolan,s players coach team Richardson?