Wasn’t quite that bad, but it was estimated that fewer than 10 people at USC knew they were talking to the B1G until about a week before word leaked out. And when Bowen Loftin was talking to Mike Slive about getting the Aggies in the SEC, his own athletic director didn’t know; the governor of Texas had shut down a previous inquiry to the SEC in 2010. We also know that UCLA didn’t keep the UC regents, including the governor of California, informed this time.

Former Congressman (and NBA player) Tom McMillen is on the Maryland board of trustees, and he found out the Terps were going to the B1G the night before, with a one-page information sheet. He said you get more info than that from a phone company trying to get you to switch.

Part of the reason is to keep politics, and politicians, out of the way. The intervention of the Texas gov was noted above. The governor of Virginia ordered UVa to vote against any ACC expansion that didn’t include Virginia Tech. And the Big 12 expansion decision came down to West Virginia and Louisville for the last spot, to the point that Joe Manchin and Mitch McConnell had an argument over it on the floor of the U.S. Senate. 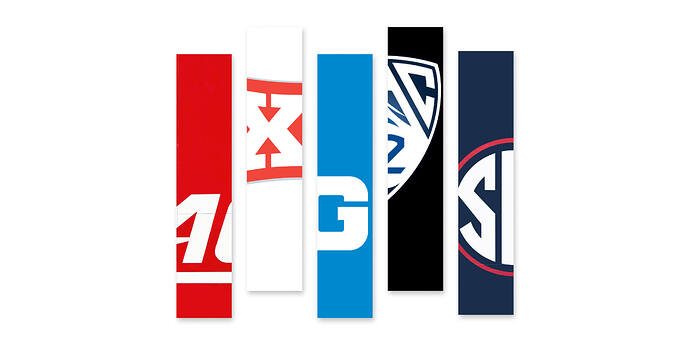 A source involved in the Big Ten’s talks with USC said about 10 people at the school were aware of the talks until a week prior to the deal.

As you well know, SF, the Aggies and Horns probably would have moved to the SEC with us 30 years ago if not for the politics (and politicians) in Texas.

Makes me wonder how all of this might have developed differently if that had happened back then. Of course, we’ll never know. But it’s safe to say the landscape of College sports as we know them today would be different in some way.

There are still whisperings that Kevin Warren will nab Cal, Stanford, Oregon and Washington once his media deal is done, and of course they’d take Notre Dame in a New York second. Which makes 21 teams. Who do they take for the 22nd?

And of course, Greg Sankey will respond; he’s going to make sure that if there’s a Power 2, one of them is us. All of which means the ACC is in even deeper stuff. And I frankly don’t see any way that the P-12 and the Orphan 8 don’t wind up merged when all this is done. Very quietly, of course.

Who do they take for the 22nd?

I really don’t think anyone is getting kicked out. Vandy is safe. Indiana is safe. Even Maryland is safe.

But if they wanna bounce Moo U for illegal use of cowbells, that’s okay with me.

Was thinking along the lines of Illinois or Rutgers.

They’re safe too. Not giving up that NY/NJ market now.

Vandy is an OG member of the SEC, but why can’t the BIG take Mizzou off our hands? So sick of being force-fed a “rivalry” that none of us care about. I so hope they aren’t one of our permanent rivals. Honestly, I’d rather have Baylor or Houston join the SEC and jetison Mizzou.

Uh Chip. Three divisions don’t work. Who plays in the BTCG? And with an odd number of teams, somebody has to be idle every week (or play nonconference, which presents huge scheduling issues when most other schools are in the middle of their conference schedule).

Yes they had an odd number after Penn State joined, so they know the problems it creates.

If we go to a 12 team playoff, there’s no need for a conference championship game, even If you do you can have a system to have 2 in the championship game. For that matter, have a wildcard and a 2 game championship. With all the changes we’re having now, I see no reason we can’t have that change, too.

As for the regular season, an idle week is no big deal. Play 6 in your division and 1, 2 or 3 from the others.

If we go to a 12 team playoff, there’s no need for a conference championship game

There’s no NEED for a conference championship game. But that doesn’t mean they are going away. Nobody is giving up that extra few million dollars. And there aren’t going to be divisions any more anyway. With 20+ teams, pods or permanent rival setups are pretty much mandatory.

There are generally 13 Saturdays in the college football scheduling window between the very end of August and the end of November; every once in a while there are 14. So everybody gets an open date somewhere. If you’re Purdue and the Big Ten tells you to take off the third Saturday in October, fine. That’s your open date. But what if your conference-mandated open date is the Saturday before Thanksgiving, or the first Saturday of the year, and you have to play 12 straight weeks before or after? Okay, you can probably find a noncon game to start the season, and the B1G is only controlling 9 of the 13 weeks. But finding a noncon game on November 20 ain’t easy.

I never said conference championship games are going away. I said they’re unnecessary and if circumstances change, eliminating them or expanding the number of participants is an option–just as picking 2 teams will be an option if there are 21 or 22 teams.

My only point is there’s nothing special about 21 that makes it necessary to add one more to make 22 teams in the conference. With 22 you could have two 11-team divisions, but that wouldn’t work a bit better for scheduling. Each team plays 10 division opponents & 2 non-con games or cross division games? Each team plays only 9? Like I said, at 21 or 22, it’s no longer a conference anyway. It’s just a consortium for money splitting.