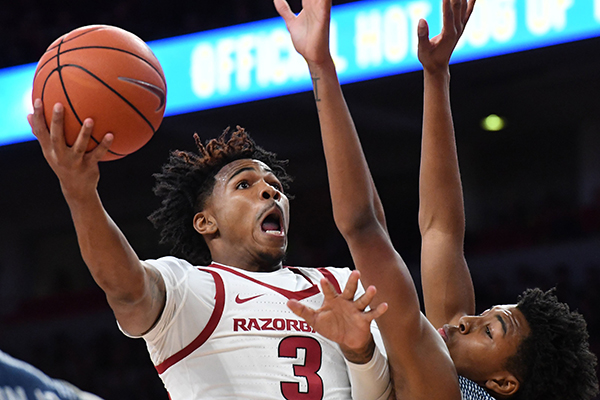 Assessing how roles and playing time could change this season now that Isaiah Joe has re-entered the 2020 NBA Draft.

Assessing how roles and playing time could change this season now that Isaiah Joe has re-entered the 2020 NBA Draft.

Very nice list and comments. Hard to argue with any of it since you changed your stance on KK. The only difference we have, I think, is that I believe KK would have got similar minutes even with Joe here.

Like you, I’m not going to take a stab at starters, but will make a crazy attempt to attach projected minutes to your list:

With Tate and KK, I’m assuming Tate will get first shot at a “jimmy buckets” type PG/facilitator and KK’s minutes will be more as a pure PG, who can shoot. By SEC schedule, I believe their 40 points will be distributed 25-15 one way or the other, depending on how well each is playing.

I think Joe’s leaving means 8 double digit minutes players instead of 9. His probably 30 minutes will be distributed among many players.

I bet Henderson, a junior, won’t be on the end of the bench. Returning players are always buried prematurely in the summer by fans.

Returning players are always buried prematurely in the summer by fans.

Yes for sure. That is why when starting lineups are projected, I am amused when Sills, the only returnee with significant SEC experience is left out.

I think it has to do with all the hype of new players. Normally we know all the strengths and weaknesses of returnees, but only come to know the strengths of the newcomers. It is a product of highlight videos which edit out all the lowlights.