I spent some time with Hunter Yurachek yesterday. He said they expect the grass field will need to be replaced following next week’s Garth Brooks concert. They have had a second field growing in Memphis since the changeover a few years ago. 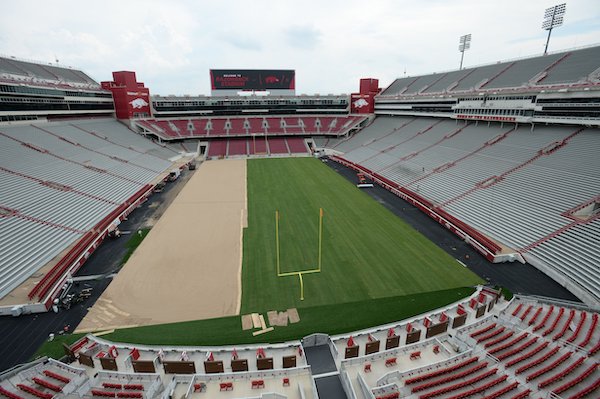 The grass field at Reynolds Razorback Stadium is expected be replaced this summer.

There are platforms that can be placed on grass fields that allow them to survive concerts, etc. (basically they keep the pressure from feet and chairs off and allow air to circulate underneath). But if they’re thinking the field needs to be replaced anyway, now is as good a time as any.

Maybe it’s been mentioned and I missed it, but what does the university get from hosting this concert? I’m assuming it more than covers the cost of replacing the field?

Also, how do I get the old field just transplanted to my yard? Or at least a few pieces? It looked pretty good on Sunday when I saw it. A lot better than my yard currently!

I’ll have something published on that before the concert, but essentially the UA gets a chance to expose itself to an audience of many out-of-state concert goers. Yurachek told me some of the states where parking passes have been mailed and they aren’t near here — places like Montana, California, Wyoming, South Dakota, etc. The UA will make money off of parking.

The UA will also make some money in concessions and probably merchandise sales. The city’s hotels and restaurants should get a nice boost that weekend, too.

Ya know, it might make a pretty good charity event to auction off parts of the Razorback Stadium Field. I think you might be amazed at the number of people that would want a piece of that field. Just a thought…

It wouldn’t surprise me if that has been considered.

My in-laws built a new house several years ago. They sold their old house and rented while the new one was finished.

When I helped them move, I noticed two giant pieces of turf on the wall in the garage with two numbers, a 5 and a 0. I later found out it came from Razorback Stadium when the turf field was installed in 2009. The turf was cut every 10 yards so yard markers could be placed. The owner of the house had stopped by the stadium and asked if he could have the cutout from midfield.

Normally concert promoters will pay a fairly hefty rental fee for a stadium or arena, but this may be different.

I’d bet they’re paying a hefty one. Not many venues seat 70k+. That’s a lot of revenue. I’ll be curious what the final tally for attendance is. (Doubt they’ll open the indoor boxes, but they might.). They’ll have seats set up on the field, I’m sure.

The expected attendance is going to be around 76,000. The stage placement won’t allow for seating in the north end zone or some of the seats on the northeast and northwest sides, but there will be 8,200 people on the field.

The fee I’m finding for renting an arena like Simmons Bank (or BWA if and when it’s concert-friendly) is about $20,000. And RRS is four times as big.

I’m sure it’s a nice rental fee complete with damages clauses in case of contingencies.

It will also be an excellent opportunity to learn and evaluate whether to allow future large concerts and how to go about it. They might even learn a thing or two to make the fan experience better for football.

We bought tickets in the North End Zone. I hope we didn’t get snookered by the U of A.

I think you might be amazed at the number of people that would want a piece of that field.

Count me in! When they tore down my old Jr. High (which had been the high school before it was the Jr. High) people (including me) purchased bricks. This would be way cooler than a brick from my old Jr. High!

it might make a pretty good charity event to auction off parts of the Razorback Stadium Field.

It was changed from turf to grass a few years back so the cost won’t be as much this time around. Since it already has a good grass base.

There were numerous 18 wheelers hauling stuff into the stadium on Saturday. It appeared to be some type of flooring to put on the field so chairs cab be placed on top. Total guess though.

They sold those NEZ seats out real quick, I don’t think there’s any restrictions, or any other sight line problems there, lol.