And at halftime in Chapel Hill, #11 Tennessee, picked to win the SEC, trails #10 UNC 1-0. Hogs are ranked #8 but picked to finish behind the Evil Mustard Empire. 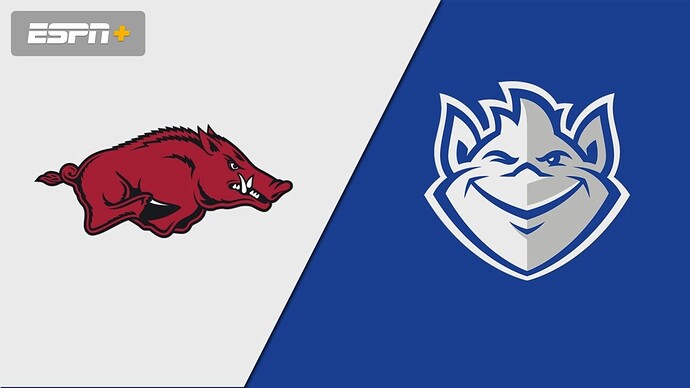 No idea what time because they don’t have that in the score box and the announcer never says, but SLU wiggled the ball into the net late in the first half. 1-0 Billikens.

Now they say it was in the 34th minute.

Arkansas was outshot 6-0 in the first half.

1-0 at half. I’m not sure we actually took a shot in the half. Live stats say we didn’t.

Not a very good half for the ladies. Getting outplayed. St. Louis appears to be faster. They are surrounding Anna Podojil and daring anyone else to beat them. So far no one is stepping up.

We’ve now taken five shots to their 10. Finally in the 68th minute, according to live stats, their GK had to make a save.

The goal came out of a cluster of people within two feet of the goal. A replay would have been interesting, because there’s a very good chance someone was being fouled in that cluster, but there was no replay (of that or anything else) and if there was a foul, nobody with a whistle saw it.

SLU won 1-0 and you’d think they just won the natty.

we have/had an effort problem tonight and inability to control or clear. Bri Hunter is needed to be a backline cop. Malham the new, Tankersley and especially Flynn were hard to overcome tonight. New goalie is interesting and has a strong leg for goal kicks and punts. Anna P had a goal in her sites and could not pull it off with her usual flair. That was our only real scoring chance even when we got desperate. I lost count of how many unforced out of bounds clears or kicks were made, happened right before the corner that led to the only goal of the game and happened all night long. This team tonight is not a rankable team even with Podojil’s. SLU was quicker to balls and was the one who made the runs that we used to make thru midfield. We will be getting better because we set the bar low to achieve that. Give SLU credit and give us credit for waking up second half but we could not shake the problems of gifting SLU the ball and being just a leetle bit off on passes for threats. I miss the Tulsa mafia that would have made those plays.

On the other hand, just one year ago this weekend we were in Durham and Chapel Hill and came home 0-2. And barely lost after that. Colby will kick some tails, I’m sure. Get back home and win Sunday and we’ll see from there.

Don’t trash my school. LoL For the SLU girls it is a big deal. It shows what SLU thinks of beating Arkansas. A backhanded compliment, I would say.
If it were the SLU boys the celebrating beating a top 25 team it would have been pathetic . They have 10 national championships but not since the late 70s.

I knew some of those SLUH girls and their families back in my Wildwwood MO days, when my daughter played for SLSG. Happy for them. Maybe we will see them again when it matters more.