This is for all sports but football. 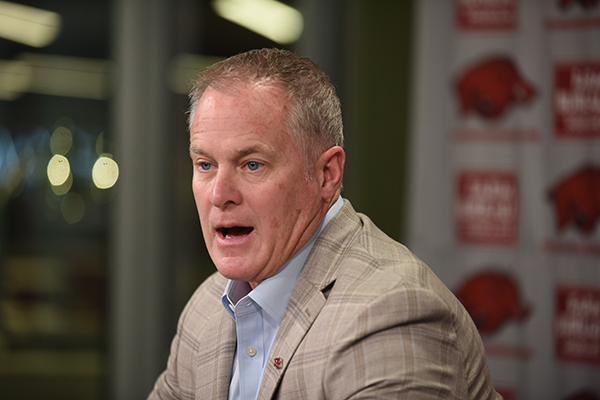 Big mistake. The camel’s nose is under the tent. And it will be home & home. Big big big mistake

Agreed on both counts: big mistake that will lead to home and home.

No to ASU. They’re opportunists at best. You don’t see them begging to play our basketball team or baseball team. But our football team is down and they finally think they have a chance. Big brother doesn’t need to listen to little brothers squaking.

We are not playing them in football, other sports. Besides football schedule is booked about 5 years out.

Besides football schedule is booked about 5 years out

So why not give football coaches permission to start discussions to schedule ASU in year 6?

It is clear they don’t want to play ASU in football. That is okay, but don’t use schedule as a crutch,

We are not playing them in football, other sports. Besides football schedule is booked about 5 years out.

The policy begun by Barnhill wasn’t because he didn’t think we should do for 5 years out. He was thinking much longer term.

It’s a mistake in the other sports, too, but just wait. HY doesn’t understand the history & apparently doesn’t appreciate how central statewide domination is to our program. Oh well, our football program has suffered badly for the past 4-5 years. Might as well be just one of the programs in the state rather than THE program in the state. Ole Miss-Miss State, Alabama-Auburn, Arkansas-Arkansas State. We’ll have a big game to get up for every year and if we win, we should have, if we lose, well, at least our rival had a good year. Play at WMS every year. Split the gate. Or home & away. That’s what’s coming. Big mistake, but it’s coming.

Agreed, big mistake! UofA has nothing to gain & everything to lose by playing in-state teams.

Arkansas is a small state that needs to support & focus on one state team & not risk being more divided than it already is.

Huge mistake. There is no need to rehash all the arguments for and against it, everyone knows them. Just a huge mistake in my opinion.

If ASU doesn’t get a football game with the Hogs in the next five years or so, it may not make any difference as to a negative impact on the UA program. I’m not sure that ASU and the Hogs are going to be playing in what is now the FBS in a few years. The Power Five may form their own organization and/or ASU may not have the economic ability to stay in the FBS.

If either of those things happen ASU is going to end up being a program with about the same prestige and state-wide impact as UAPB and UCA. Losing to teams at that level is hugely embarrassing to an SEC team, but you don’t worry about losing a portion of the fan base to teams that don’t play at the highest level of the sport.

I have been and remain dead-set against playing ASU in football. I don’t see any reason to try to do someone a favor who only wants to grow their business by eroding your share of the market. But if ASU finally ends up in a lower level of the sport playing them is unlikely to be nearly as potentially detrimental as it would be now.

I have been and remain dead-set against playing ASU in football. I don’t see any reason to try to do someone a favor who only wants to grow their business by eroding your share of the market. But if ASU finally ends up in a lower level of the sport playing them is unlikely to be nearly as potentially detrimental as it would be now.

I agree, However, I remember when they were in a lower division than we were & they were still screaming to play us. But I am not too sure about the departure of the power 5 programs from the NCAA or the G5. It’s possible, but I kinda doubt it. Even if there is, I’m sure there’ll still be games between schools in the 2 divisions unless the season is trimmed back to 10 or 11 games. I don’t see that happening at all.

If we MUST play ASU in football, I’d want to put them in a 3-4 team rotation with UCA, UAPB, & maybe even Ark Tech. Let them know we put them in the same light as those programs. I’d still rather maintain our “no in-state competition” policy that has served us so well for 80 years.

Big mistake in any sport! Home and home in basketball! You’ve got to be kidding! Why? I don’t buy the travel expenses savings. I live in Paragould and last year ASU was lucky to have 2500 at a home game.

I have yet to see one benefit to Arkansas for playing in state teams in football.