Rankings for week of April 19

If you actually snip a picture, it works better than trying to paste a spreadsheet that wants to wrap around and confuse the columns. 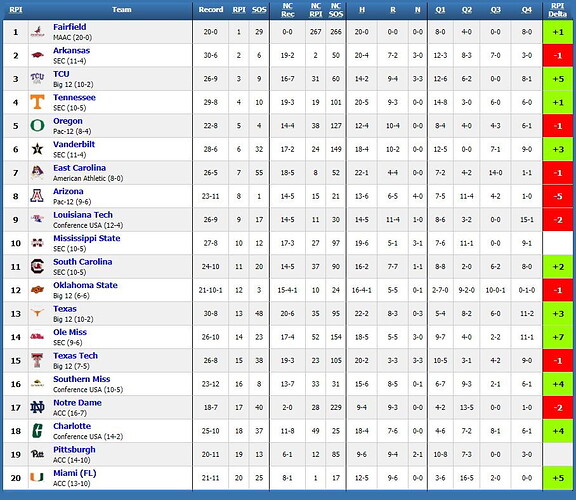 Wonder which pollster (I didn’t use “coach” because I don’t believe many actually fill these out) voted us as #8?

30 first-place votes, and only 2 votes for something other. Not too shabby.

True, but I posted it using my laptop and it looks fine. And if you rotate to landscape, it doesn’t wrap.

I’d like for that person to tell us to identify the 7 teams who deserve to be above us. That’s ludicrous. I can see thinking maybe we’re #2 or 3, but 8? That’s absurd. At least not based upon anything accomplished so far this season.

my guess as to who might have voted us 8 would be one of the two teams right behind us, in the hopes that the vote would be enough to shift them above us.

Or you could always have a sour sore loser like a Steve Spurrier back when he was head coach at South Carolina and Dmac ran wild on them for an SEC record 323 yards. That year I think he left Dmac off his Heisman vote or voted him really low. That smacked of being a poor loser and vindictiveness.

That’s not what the high/low means
That’s the high and low ranking in the poll for the year.
I noticed it the first week we were ranked first and couldn’t figure it. Found in the small print somewhere that it’s the range of ranking for the team for the year. We started out 8 preseason

I didn’t notice that. You’re right. We’ve been much lower in the polls. I thought there must have been something that told us somebody voted us #8 this week. Thanks for the clarification.

The SEC voter is Butch Thompson of Auburn. The Big 12 voter is Josh Holliday of Okie Lite. The Sun Belt voter is the Pink Puppy coach, but he’s been voting all season, why drop us now? Nobody in the top 15 has a vote

Though I must say I was rather happy to think someone had Texas as “NR” this week.

Nobody voted Arkansas below No. 2 in the coaches poll this week. There are 800 points possible and Arkansas received 798. So the Razorbacks were No. 2 on two ballots this week and No. 1 on the other 30.

Arkansas is No. 1 in all six polls this week.

Though I must say I was rather happy to think someone had Texas as “NR” this week.

Texas has had a wild ride in the coaches poll this year. The Longhorns were No. 10 in the preseason, fell out by the second time the poll was updated and are now No. 3.

The coaches were not impressed with the losses in Arlington or the losses to BYU and Houston. Then Texas swept previously undefeated South Carolina and coaches reversed course.