In the final poll shown (Collegiate Baseball) I find it interesting that we were #1 last weekend, we win 2 of 3 games at LSU while Vandy loses a series at Florida…yet, we’re only TWO points ahead of the Commodores.

What were were last week…ONE point ahead of them? Or did they actually gain ground on us losing 2 of 3 games?

Vandy actually has a pretty high team batting average. Their deal is they are really average on the mound outside of Rocker and Leiter. As far as I remember they have not survived bad games by those two. Of course, the bad games for them have been pretty uncommon.

Who is number one in SOS?

BA noted that Arkansas has tied Oregon State in 2017 for longest consecutive weeks at #1 in the last decade.

According to Warren Nolan, LSU is #1 in SOS. Which makes sense, given what happens to us in football: We play a killer schedule and we’re not good enough to boost the SOS of the teams we play.

I looked up the Needs Report at Boyd’s World, which lists what a team needs to do from here on to get top 45, top 32, top 16 and top 8 in RPI. Bama, for example, has to run the table in the regular season to get top 8. Then I got to Arkansas: Top 8, no more wins needed.

No complaints about the significant week over week drop in ranking by ut.

Arkansas received all 32 first-place votes in the coaches poll. 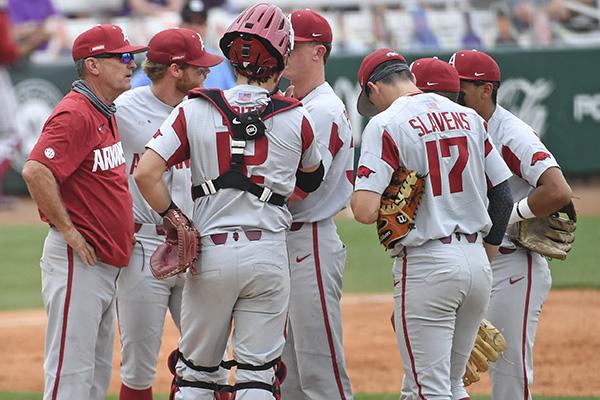