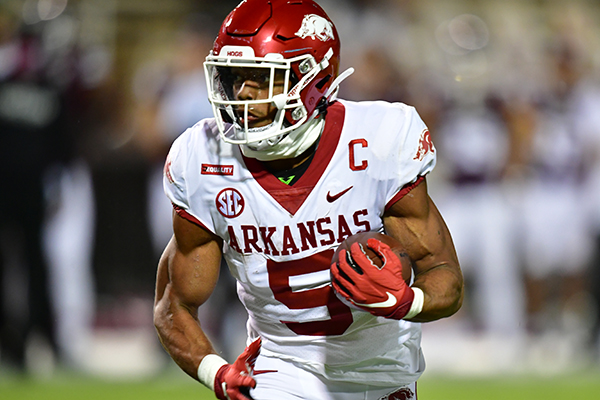 Arkansas tailback Rakeem Boyd will opt out of the final two games of the season.

This won’t help his NFL stock.

Good luck to him. I appreciate his past contributions even though I don’t appreciate his leaving us in a lurch for running backs the rest of the way.

My first thought was that he cut himself out of whatever shot he may have had at showing his stuff at the Senior Bowl, but it has been reported that Jamie Newman was invited to that game despite opting out of the entire season.

I suspect it will hurt his chances with the NFL. He has not had a productive season.

but it has been reported that Jamie Newman was invited to that game despite opting out of the entire season.

but it has been reported that Jamie Newman was invited to that game despite opting out of the entire season.

My only point is that Boyd is apparently not automatically locked out of the Senior Bowl,

This will not impress NFL teams. Maybe he can make up for some of it by showing well at the Senior Bowl.

He was a mid-round guy at the start of the season. He had a subpar season and then quitting with two games left will scare off teams

I agree, too. Early in the season when we didn’t know how covid would affect players, etc, I could understand opting out. But to do it with two games left makes him just look like a quitter. I hate it & hate it for him. We could have used him against MU & he could have used a good game to boost his stock.

At this point, opt out = cop out IMHO.

Sadly, this news doesn’t surprise me at all.

Prior to this season, I was a huge Boyd fan. I loved his heart, desire and dedication last year and thought his coming back was a big win for our team. Very disappointing are the words that come to mind when thinking about his play this year. At times, he has appeared almost disinterested in playing the game. For whatever reason, he has shown only brief flashes of his potential. While injuries have played a part, when have they not with Rakeem.

I’m not sure what is going through his mind, but opting out with two games left is just quiting on your teammates. Wow, and for a team captain. I agree with the above posts – don’t see how this can help his NFL stock especially after a very subpar year.

Have been more impressed with Treylon Smith’s performance over Rakeem Boyd during much of this season. If Boyd believes he can get into the NFL, he is the 2nd best back on this team? Believe the following stats are correct. Understand that Boyd was injured part of the season.

Understood AL will shut down our running game but Boyd needs 2 great games to impress the NFL. Quitting on this team will not impress.

It’s a business decision that probably got made when his position coach told him that Smith was still likely to get at least half the carries the rest of the year. The chances of him being on the field enough to improve his draft stock the rest of the year were not good. He probably figures he’s better off trying to get completely healthy, working out and getting ready for the Senior Bowl, the Combine(if he gets an invitation) and Pro Day.

Boyd’s been hurt a lot this year, and has not looked like quite the same guy most of the time when he’s been available, probably because of the injuries. Pretty hard to assume he would have returned to something like his old form this week. His absence will be felt more because we don’t have anybody else besides Smith who has shown they can handle ten carries a game. Maybe Dominque Johnson will finally get some carries this week.

Spot on. This is all business with him and the NFL. Good luck to him. I don’t like it, but it’s his life, and if anyone thinks the NFL cares when someone leaves a team they are wrong. They will evaluate him in the usual way and that won’t be part of the decision making.

His absence will be felt more because we don’t have anybody else besides Smith who has shown they can handle ten carries a game.

I’m all for throwing the ball nearly every down. That’s the way Baylor did it. Then, when they ran the ball, nobody could stop the few runs. Ahh, isn’t Briles Jr part of our team?

A GM has told someone I know he doesn’t like kids that quit on their team.

He Quit his college team! If he ever makes it to the league he’ll probably be wanting to sit out every time he’s a little sore or tired.

I don’t have any insight as to why this young man made this personal decision to quit on his teammates with two games left to play and it’s not my place to pass judgement on him. I’m sure his brothers and teammates are disappointed with his decision to shut his season down when they are left to go into battle with one less round in the chamber.
Unfortunately, this is and has been taking place much more over the past few years than ever before historically speaking, but on the bright side this young man was not a CSP recruit and I don’t get the sense that players that come to play for CSP in the future will be the type of individual that will ever quite on him, their teammates or the University’s name on their jersey when healthy enough to contribute to the team.
As for prospects for his football future, who knows?
Perhaps, some NFL teams won’t care and perhaps some might.
Either way, it’s a risky decision in which he’s betting on himself and his future. RB’s in general have a very short shelf life in the NFL and are rarely high draft choices. IMO, he will likely end up not being drafted and try to make it as an undrafted free agent or possibly wind up playing in the CFL for not a great deal of money.
Just my two cents.

I promise it makes a difference with GMs in terms of Draft Position. Now if he goes to combine and does great and Sr Bowl, he can move up, but that will still be a black mark. They look at everything about the guys. If there are two equal backs and one played hard for his team all the way through vs a quitter, well guess which gets the nod. The NFL is full of late round to Free Agents who have played their way in with heart. That goes a long way, especially at RB.

Perhaps Rakeen has not healed. If so for his own good, that needs to be made known, but even that hurts him with the GMs. They want their draft choices to see the field.

I am no expert at all, but talent wise I think he is a late, early rounds pick. His body of work had him at mid round. By not giving his all to the team this year, and then quitting, I suspect late round from someone looking for a practice squad back or something like that. He can always play his way up from that, but they will always wonder if they can count on him to be on the field when they need him. He will probably get drafted because of his potential, but I don’t see it being high. He has proven this year that he is no Alex Collins.

I do not understand how you can improve your stock by not competing. It seems to me like he was looking like he had pretty good value going into last year’s draft and he chose to stay another year, much to the delight of hog fans everywhere. In fact he was called Sam’s “best get” by some. For him to come back showed some loyalty, I was surprised that he did. And now to see him leave is puzzling, he played on a much worse team last year.

Just as I said with Jerry Jacobs, it seems to me the best way to prove yourself to the NFL brass is to compete against SEC teams.

But there are a bunch of people in these guys ears and it suddenly has become a “thing” to opt out.

I remain old school. You finish what you start