Question for Dudley and Richard about recruiting

For those of us who don’t follow recruiting very closely, what are your thoughts about this class. How do you think we did versus the rest of the SEC? Were you pleased, disappointed or did we kind of do like we have been doing.

If you want to wait to write an article about this, that is fine. I will try to find and read it.

I am not the recruiting guru. That’s Richard and Dudley. They will get to this when they wake up tomorrow. They were up late last night and again early this morning – like 5 a.m. early.

I like the symmetry of the class – offense versus defense, OL versus DL, speed at WR and speed in the secondary, two QBs, two ILBs.

I know there is more out there in the late period, especially in the transfer portal. I would believe they are going to try to add two OL and two DL to add more symmetrical beef in the trenches, good to great speed at RB and a beast of a TE (Outley).

This class is in the middle of the SEC. It’s not at the top, but it’s not at the bottom either. And, it’s a top 25 class, as high as 20 in one service. Middle of the SEC is really good. Most of the work in this class was done before they won three SEC games. The next class will benefit from winning some games and that’s what helps you the most in recruiting.

The key is to recruit your needs and it looks like that happened. Only four in-state signees, but not a particularly good group in-state to pick from. The in-state class next year is really good, so that’s something to watch.

They took six from Oklahoma and I like that. There are Oklahoma natives on this staff – both Pittman and Odom, and some assistants that have roots there, too.

I strongly encourage you to watch CSP’s press conference about this class. He covers every player. But my assessment. We got more speed this year at the skill positions and we got bigger on the line. We need more size and talent on both sides of the line and CSP addressed that in his PC. He said we have 4 schollies to use if he wants and he’d like to go 2 on on each side of the line if he could, but only taking immediate impacts, and if he could find that at another position, he’d take it too. I think he knows the problems and is addressing them. We just need a few more years for depth, but this class moved the needle to the right side.

It appears CSP and his staff also addressed the kicking game with upgrades at kicker, punter and long snapper.

Well, they are addressing the part they are willing to blame. I hope they are right.

Tom Lemming has the class 7th best in the SEC and No. 18 nationally.

I think they added SEC speed at RB, WR and DB. Green at RB for sure and I think Bryce Stephens is underrated. Reminds me of Joe Adams because of his ability to make people miss. I think he’s faster too.

I watched his PC. Sam says he likes the class. What else would he say? Still, when he says that, you believe it. I don’t think the man has much BS about him.
He knows coach speak and does it some, but somehow it does not sound like it.
He was very honest about the needs and very honest when said there were further needs, but this was a step in the right direction.
He was asked about the Bowl Game. I loved what he said about that!!

I have a question about the OL. Whatever happened to Henderson, Curry and St. Jean? I heard so much about Henderson and how good he is, but never heard if he ever played. Will these three help our OL next year?

From reading our insiders, sounds like St Jean had to lose about 50 pounds on arrival. curry needs a year in the weight room. Henderson likely would have played in several past seasons, but the lack of spring practice hurt, our parsity of TE’s that had him working over there, and the fact that we have a few decent OL ahead of him, all a little older.
But I’d be very surprised if Henderson isn’t starting 2021, and the other 2 at some point.

just my .02, I’m sure the insiders can tell you more, once they recover from working 40 of the last 48 hours, lol.

Have our grad transfers been disappointing? The kid from ASU was good, but Kelly and the LB from Oklahoma didn’t look like they were what they expected.

Jerry Jacobs was good, but left/kicked out midway through the season.

Levi Draper the Oklahoma LB was injured and didn’t play this year.

I don’t think grad transfers are ever 100 percent hits. Just like anything else, sometimes they fit, sometimes they don’t. I think Draper would have played except for the injury. Franks was a team captain. Kelly got better as the season progressed.

Coaches like the three freshmen OL Henderson, Curren and St. John. All have a chance to play. Henderson is the best athlete in the bunch.

Where do u find the press conference to view? Found it

Back in the day, you know, when you had depth, you didn’t play underclassmen on the line, unless you had Shawn Andrews or Jonathan Luigs. So, just because they haven’t played doesn’t mean they won’t contribute. They need a few years in the conditioning program and learning fundamentals, but I’m confident those guys are going to play. If they don’t, it’s because we found someone better, and that’s a great thing.

I did go watch Coach Pittman go thru the class. Then, I did read the bios of each player and who we recruited against to get each player. We are in the Top 20 with ESPN, so this year was a good one, but I expect Coach Pittman to ramp it up in the coming years. That is life as we know it in the SEC. If you are not getting better, you are losing ground.

The information all you guys at Whole Hog Sports provide to us is pretty amazing. It is a non stop process of gathering information and giving it to us readers. Thank you so much.

Yes, I was asleep as early as I have been in a long, long time last night.

But here are a few additional ones.

I think it would be great to add a pure edge rusher, which is something that Coach Pittman says he still would like to do.

I am a big proponent of at having least four offensive and defensive lineman in each class. Coach Pittman has 3 and 3 in the 2021 class at this time.

I think it was telling that Coach Pitttman said that Rocket Sanders will be used at both WR and TB. I think that covers having enough at both spots for next season’s roster.

Love what they added at the skill spots.

Tight End? Would be nice for them if Kern was back to join Hudson Henry, Blayne Toll, Collin Sutherland, Eric Outley and Marcus Henderson (?).

LB - I love Chris Paul and think Marco Avant has a lot of potential with his size and speed. It will be time for Andrew Parker, Eric Thomas, Zach Zimos, Levi Draper to make a move, especially if Grant Morgan doesn’t return.,

I believe the five DB-Safety additions will restock that area.

I also think that hit a home run with the three new specialists and adding some people who can make a difference in the return game.

I believe the Arkansas staff did a heck of a job to have a top 20-25 class with what they were handed by the previous two staffs and covid not allowing live recruiting. 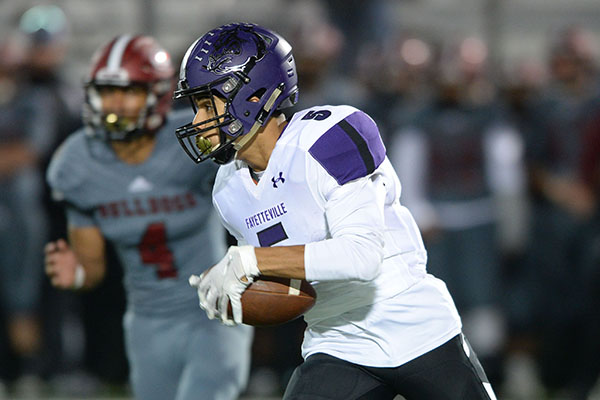 Arkansas’ football program took a step forward Wednesday when it landed the signatures of 23 prospects on national letters of intent.

You never know until they play but Green looks like a beast at a news position with a body to play early.

If Levi can stay healthy he will help particularly in pass coverage. He’s fast. Shoulders are tough injuries for LBs.

His dad tells me he thinks they’ve cleaned it up and he’s primed to make an impact. They absolutely love the staff.