What’s happened to Devin Bush? I know he almost transferred this off-season, but decided to stay. Has he played at all this season?

What’s up with Blake Kern falling to 3rd on the Tight End depth chart. Have not noticed Blayne toll in the games this year, and have seen Kern in several plays (and some catches).

Not questioning the coaches’ decision - just wondering what has changed. Is Kern nicked up?

Kern is still listed as an either/or starter with Hudson Henry at tight end.

It looks like Devin Bush has played in one game this year, vs. Ole Miss. He was out for an injury or covid at the start of the season. In the summer Pittman praised how well he was working. 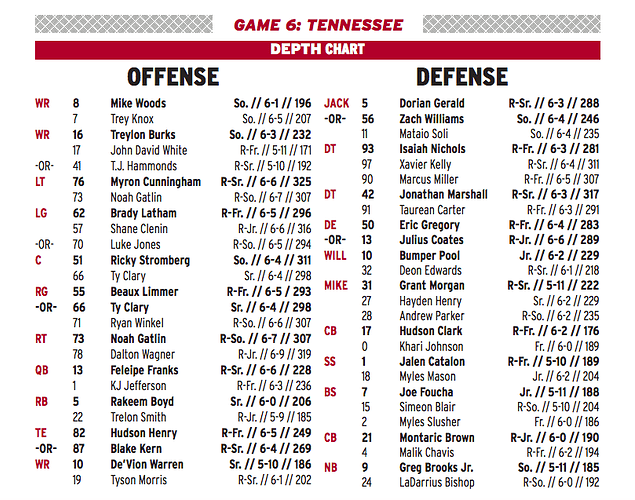 I think Kern is very much a starter as much as Henry. Both played a lot and played decent against the Aggies.

I think Kern is very much a starter as much as Henry. Both played a lot and played decent against the Aggies.

Sorry - my mistake on Kern. Saw depth chart posted elsewhere and Kern was not listed; apparently, just a typo at that one place. So that explains that. But, while I’m on TE…what’s going on with Toll? He was much discussed prior to the season, but I’m not sure if he’s played at all.

And then, back to Bush. Is it just health? Again, I remember he almost left in the off-season and was “recruited” to stay. Is he one of those guys who we will just hope to blossom next year (if he’s still here)?

From what I have heard from someone close to the team is that Toll doesn’t have the best hands and his future will be at DE after this year. We’ll see if that plays out.

Others are ahead of Toll for now. But covid could make him necessary at TE at some point. We will see if he stays there.