Paywall, but I’ll do the Cliffs Notes:

Is it legit? Since Brent Zwerneman broke the story, industry types are more or less confirming it to Mandel, that OU/UT are sniffing around.

Both UT and OU released vague non-denials. Really, so did Greg Sankey. So nobody is denying it.

Why would Texass want to jump? Fan apathy about playing K-State and Iowa State, lack of interest from the networks in improving the Big 12 TV deal, and an easy/profitable transition from LHN to the SEC TV package.

Why does OU want to jump? Because remaining in the Little Nine is like captaining the Titanic. You’re the boss for a while but your prospects are not good.

Why would the SEC want the Cows and the Clips. You know that answer, and it rhymes with honey. Plus a stronger league would grab even more of the available spots in a 12-team CFP.

Who’s against this? Other than A&M, we’re not sure. And the orphans EOE and OU would be leaving behind. But A&M can’t stop this alone.

What could prevent this? Politics. Baylor and Tech-aligned politicians made sure their schools were taken care of when the SWC folded. OK’s governor is an OSU grad. The governor of Texas now is a UT grad though. Or if four SEC schools want to keep them out bad enough to vote against it. Arkansas and Misery, having had the misfortune of being in a league with Texas, could conceivably be no votes. But who else? And there aren’t many people left around UA who really remember what it was like being under UT’s thumb in the SWC. That was 29 years ago, after all. (Last two sentences are my comment, not Stewart’s).

What happens to the Big 12? Either every school for itself, or try to regroup by adding Cincinnati, UCF, BYU, Boise, schools like that. Maybe the new Pac-12 commish would welcome 2-4 of the orphans. The AAC would probably take them and try to replace the LD as the fifth power conference. But football is going to drive that. As good as Kansas basketball is, it might wind up in the Mountain West if they can’t save the Big 12.

When will we know it’s a done deal? When Greg Sankey announces it, or a 12-2 vote to invite them leaks out. 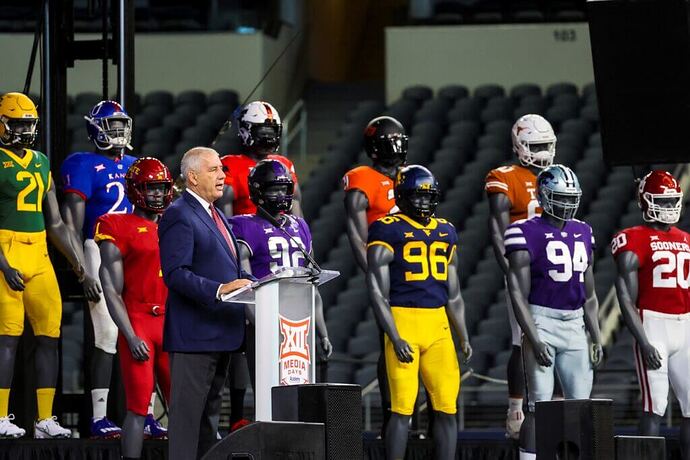 Texas, Oklahoma jumping to the SEC? This conference realignment FAQ will...

It's not clear that this is definitely happening. If there’s one golden rule of realignment, it is this: Believe everything and nothing.

Also in the comments, someone suggested that OU and UT might be trying to play the SEC off against the ACC to get the best deal. And Stewart agreed.

One of the big reasons OU would leave the Big 12 (besides more $$$$) is that their AD is not a big fan of 11am games. That time slot seems to be the preferred slot for Fox football.