sure looked like TN scored on their last play.

They did. These pics are from ESPN twitter, and note the whistle hadn’t blown when either of these were taken. It was replay booth that stated timing of whistle is irrelevant as they determined forward progress was stopped prior to reaching the end zone. Which is odd because there seems to be some forward progress between pics 1&2. 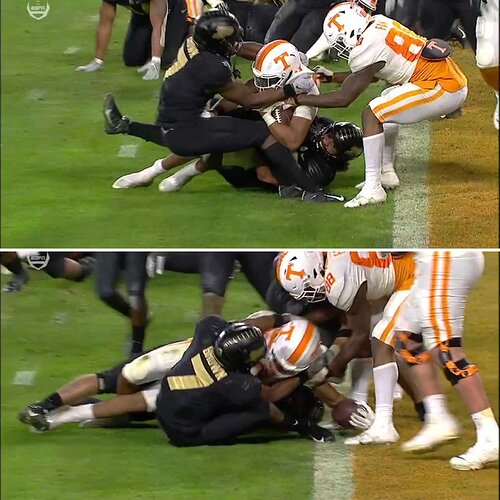 Not a big Tenn fan, but hate to see any team lose like that at the hands of the refs

I watched Auburn lose, in large part due to a couple of obvious missed calls by the refs on Houston’s game winning drive, and I must admit…I was absolutely giddy over it

I wasn’t giddy but satisfied

Didn’t replay show this too or did they not have this angle?

Replay did show this, these are screen shots from the actual replay video. They replayed this several times with sound to determine when the whistle blew, and it was at least a second or more after ball was in end zone. So the announcers called it a TD while it was still under review. They were surprised when it came back no TD. They asked and got clarification the whistle was irrelevant because forward progress was stopped prior to the whistle blowing, I guess the refs forgot to blow their whistles. Announcers weren’t sold.

I saw a good question on a Tenn board, if whistles are irrelevant, then why do the refs even have them?

Called forward progress stopped. The RB was stopped in the first frame, then fought mightily between the two frames to the second here. Close call. Refs get it right a lot more than we think. Because they know the rules a lot better than us.

Anti-SEC bias has been evident in a couple of Bowl losses.
However, this one feels like karma with a slap to Vol fans. About 50 more like this and I might try to forget and forgive the Liberty Bowl Swindle.

After Memphis 1971, I didn’t mind EOE getting shafted in a bowl game. Payback only took 50 years.

Joe Rexrode of The Athletic wrote this about the whole forward-progress mess:

… officiating is the rusty, leaky toilet in the billion-dollar palace of college athletics. Toilets are necessary, and we’d rather not have to talk about them. So let’s invest in better ones.

Which means, he says, make them full-time employees instead of, say, Birmingham financial planners (cough-Marc Curles-cough) five days a week and incompetent zebras one day a week.

The all time screwing of the Arkansas Razorbacks 1971.

Thanks for reminding me about Preston Watts. I’ll drop his name to my Vol friends when they complain. In a nice sarcastic way of coarse. Most tell me I need to get over 1971. None say that we didn’t get screwed.

Preston Watts, blast from the past. Watched that game as a kid and suicide was always considered in those days when we lost

You can stop the injury fakes by not letting the player back on the field for three plays… if it’s a real injury, you should take a few plays off anyway. On the bad call against the Vols, I expected to see batteries, golfballs, and other objects hitting the field.

With more play calling eptitude on the Vols’ last possession in regulation, a makeable FG would have been likely and the OT unnecessary. With 40 seconds and 3 TO’s in hand, the first 2 play calls were runs. Are you serious? Then the last 2 calls, when field goal range was needed, were long passes. Give me a break! By the time OT came, Heupel had NO confidence his defense could stop anything, hence the run play that failed rather than a FG from inside the 5. JMO.

I was looking for mustard bottles hitting the field…

Did his teammate pull the ball carrier across the goal line? I thought that was not allowed — you can push but not pull?

No, he reached out with his left arm and stretched the ball over the goal line while lying on top of the defender. You can see that in the pics I posted above.

Plain as day. Karma struck the Vols. Bad call but Purdue would have had the opportunity to match that score. I wish they both could have lost.