All EPL Champions League football final is on. Yesterday, Manchester City took care of Paris St Germain and today Chelsea put away Real Madrid with Christian Pulisic sealing the win with an assist for a Mason Mount goal.

Barring injury, Pulisic will become the first ever American to actually play in the Champions League final. Javan Kirvoski was on the Dortmund roster that won Champions League in 1997, but he never got on the pitch to play. 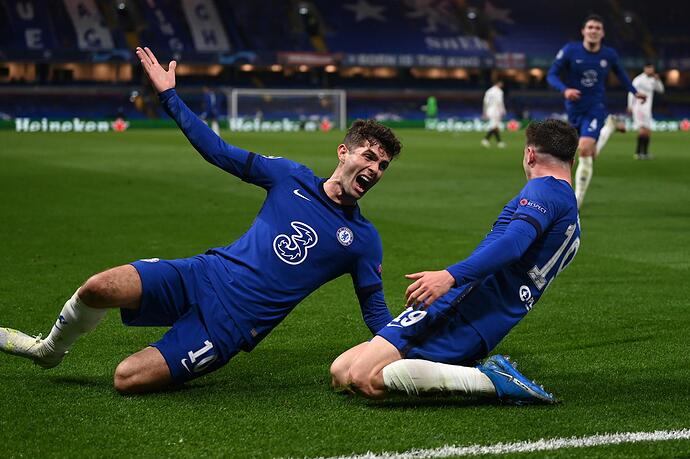 No American male has ever played in a UEFA Champions League final. On May 29 in Istanbul, two figure to have the chance to change that. 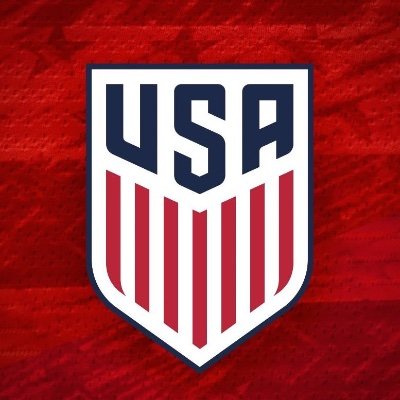 Also it is a given now that an American will win the Champions League. Zack Steffen is the backup goalkeeper for Manchester City. Barring injury, I don’t expect him to actually play in the final.

A #USMNT player will win the @ChampionsLeague this season! 🇺🇸🏆 https://t.co/3h8u1g3imn 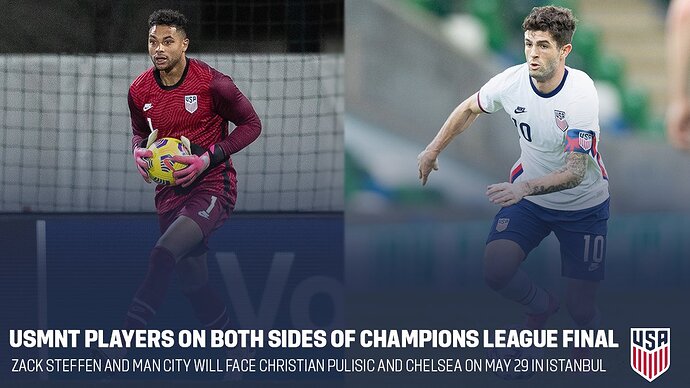 What strange game is that in which players just kick a ball around for hours.

And what insular people who make no effort to understand a game that is many times more popular than the NFL or baseball.

Actually we stole both football and baseball from the Europeans. The only true American game is basketball, but I have never been able to appreciae either cricket or
rugby.

Cricket is fun to watch although I understand next to none of it. It has also occurred to me that the really strange game is the one where people run for 7 seconds and then get in a circle to talk about it before they run some more.

I am old enough to realize neither baseball or football is the same game as it was
70 years ago. Come to think of it basketball more so. I can remember the two handed set shot in the NBA, I forgot who the first guy was to shoot a jump shot.

God willing, to watch the All Blacks v the Springboks or the Wallabies before I die

Nothing like the down under battle between Wallabies and All Blacks. Those Test Matches are exciting to watch. Caught a couple of them on my frequent trips to Auckland and Wellington in the 90s. Never could time it right whenever I was in Sydney. Wanted to see how it feels like when Wallabies are playing at home.

I see these on TV now. But it is not the same as being right there. Just like watching the game at BWA is a whole different experience than watching it on TV.

In October 2015 I ran a marathon in Frankfurt, Germany. Race was on Sunday, I had nothing to do on Saturday, so I decided to try to find a soccer match. Eintracht Frankfurt, the local Bundesliga team, was out of town. But it turned out that two other Bundesliga teams were in the Frankfurt metro area, and one of them, 1. FSV Mainz 05 (yes, the 1. is part of the club name; it signifies that that was the original soccer club formed in Mainz), had a home match that day. So I caught a train for the 25 mile trip over to Mainz, and a shuttle bus from the train station to a stop about a half mile from the stadium. I’d found a decent ticket online and there I was, at a Bundesliga match.

Found out several things quickly. One, you don’t stand up and cheer unless you’re in the standing room section, in which case you have no choice. Second, they didn’t want my euros. I had to buy a debit card to purchase concessions or souvenirs; anything I didn’t spend could be refunded at the end. Third, my near complete lack of German language skills were no problem at all; virtually everyone knew a lot more English than I knew German.
So I watched the match (Mainz lost to Werder Bremen) and hiked back to the bus stop. Then came my biggest surprise of the day. Standing near me at the bus stop was a young man wearing a Razorback T-shirt. In Mainz, Germany. I didn’t get the chance to ask him where he got it. Maybe he was an American; there are a Corps of Engineers base and an Army airfield in nearby Wiesbaden. Or, judging from his haircut, he may have been a German with a cool shirt.

Fast forward to two weeks ago. Mainz, which is in a battle to avoid being dropped out of the Bundesliga for next year, was hosting Bayern Munich, which has won the league title nine straight years and was in position to clinch another one that day. But Mainz came out sharp, Bayern was flat, and Mainz wound up winning 2-1. So I’m watching this on ESPN+ and thinking about that October afternoon in the same stadium and the guy in the Hog shirt.

That was the same Saturday as the 4-OT win over Auburn at RRS. Since Germany is six hours ahead of Arkansas, I was sitting in my hotel after dark while my son texted me updates from RRS. Which blew up my phone bill for that month. Totally worth it.

This is strictly a friendly rebuttal to the soccer fans who complain about American football having no action. So don’t get angry. My criticism of soccer is much the same as ice hockey, so much effort and not much accomplishment. As the late, great George Lapides from Memphis once said “both soccer and hockey would be much better sports if they didn’t have a goalie”.

Understand where you are coming from.

How do you feel about a tight pitching battle and a 1-0 baseball game or an Alabama-LSU 7-6 deceive gem?

To me, any sport is enjoyable if (1) you understand intricate rules of the game and (2) if you have some association with the team in team sports or know the players by name. Once you have that, you pick up on the strategies employed
and soon get wrapped up in the drama around that and then the sport has you.

Hockey is awesome. Futbol is too once you understand the game.

I fully respect the skill level of soccer players, and as I watch it more I do see the plan of attack when the team has possession of the ball. The skill in the players and athleticism is certainly very impressive. It just seems with that much action there would be more scoring. Baseball is a fair argument, but it’s kind of it’s own unique game, not even a clock involved

The defense is pretty good too. There is a goalie, but if the defense is good enough the goalie won’t have much to do. I watched the Florida State-Penn State NCAA match the other day. FSU attempted 32 shots in 90 minutes. PSU tried 2. They couldn’t get possession and couldn’t do anything with it when they did; the FSU press took it away.