I was on a conference call yesterday with Nick Carparelli, the executive director of Bowl Season (formerly known as the Football Bowl Association). He said proximity is likely to play more of a role in selecting teams for bowls this year.

His thoughts and Sam Pittman’s comments yesterday seem to indicate Arkansas is most likely to play in Memphis, Fort Worth, Houston or Nashville. 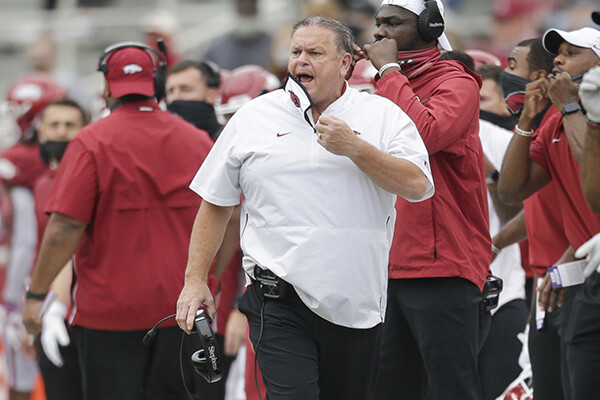 Proximity to a team’s campus is expected to play a prominent role in the selection of teams for bowl games this year.

Actually, I think “awesome” probably would have been just fine.

I would like the bowl in ft worth, that would be a new bowl for us. I like beating Texas anytime, but we do play them in the 2nd game next yr in Fayetteville. But if it is Texas, bring ‘em on!!!

I really don’t care which bowl or where. I just want the guys to have those extra practices and to have a few nice perks at the site. Most importantly, I want to win the game. I think that is important for us.

Several has mentioned Texas. That would always be something special. I wonder if their talent could be a little much right now. They do have that edge over us, but their coaching is in a complete mess. We saw this year that the teams with a high talent level was generally a little (or lot) too much. Is that Texas? Would they put it together for their coach to try to save him or put him in a better lite. A loss to poor little Arkansas would certainly not be well received!

I think Texas would be a tough matchup for the Hogs

Any bowl against anybody will be beneficial to this team. Need the reps.

Any bowl against anybody will be beneficial to this team. Need the reps. .
And I too agree jimbeau77. Personally I’d love to see them return to Nashville in the Music City Bowl. GHG!

I stay in the DFW area and that bowl has been beyond horrible for the last 10 plus years! They have problems giving away tickets to that bowl but on the bright side, at least were going to a bowl! Also that bowl is at noon

They do have that edge over us, but their coaching is in a complete mess.

There must be something about that Austin campus. Someone must have put a curse on it. When Herman was hired, he looked to be a certain great Power 5 coach in the making. He was the first choice for every team who was looking for a new HC at that time. It sure got Charlie Strong after his great run at Louisville, and now Herman.

A healthy Razorbacks squad will beat Texas. I might stay up past 9 pm for that game.

We’ll see the Horns in DWRRS next September. I think we’ll be better equipped to win that game that we would be to face this current team.

Does the Independence Bowl no longer exist? I see all this talk about bowls and proximity and no one is mentioning the Independence Bowl in Shreveport, LA. I’m not advocating we go there, but it is a bowl we’ve been to before and it is the second closest bowl to us. I’m just wondering if something has happened there.

This is the first year the SEC hasn’t been affiliated with the Independence Bowl in 25 years. There have been years during that time an SEC team didn’t play in the bowl, but that was because there were not enough SEC teams to fill all of the bowls, and the Independence got the last pick, after the Birmingham Bowl.

I don’t think the SEC will go back to Shreveport. Others on our board who are from the area probably know more about the condition of the stadium than I do, but I seem to remember it being in rough shape the last time Arkansas played there in 2003. The bowl has also had a lot of trouble keeping sponsors.

The Gasparilla Bowl basically took the place of the Independence Bowl in the SEC bowl rotation. That bowl used to be played at the Rays’ indoor baseball stadium, but moved a couple of years ago to the Buccaneers’ home stadium.

Texas would boat-race us right now.

That would be a tough game for us…

Statistically, the only difference between us and Texas is in their offensive production. They are gaining nearly 100 yards more than us a game and are scoring about 15 more points than us a game. But, I think that says more about Big 12 defenses vs. SEC defenses than it does about the two teams. I’m not saying we could beat them, but I’m certainly not afraid to play them thinking it may be a blowout. I think we could hang. Not sure about depth issues in the 4th.

On paper a tough game. Like Miss State, Ole Miss, Tenn and Auburn. Glad we don’t play them “on paper”.

I’m not saying we could beat them, but I’m certainly not afraid to play them thinking it may be a blowout. I think we could hang

I have to believe their depth is far deeper and stronger than ours.
Without a plus-two in turnovers, it would be a real battle for a win.

I think the depth would show up around late 3rd and 4th quarter! We could play with them but we would need some breaks for it to be close in the 4th quarter