Arkansas was picked third in the SEC West in a tight vote by coaches. The Razorbacks tied Florida with four selection on the preseason All-SEC team. 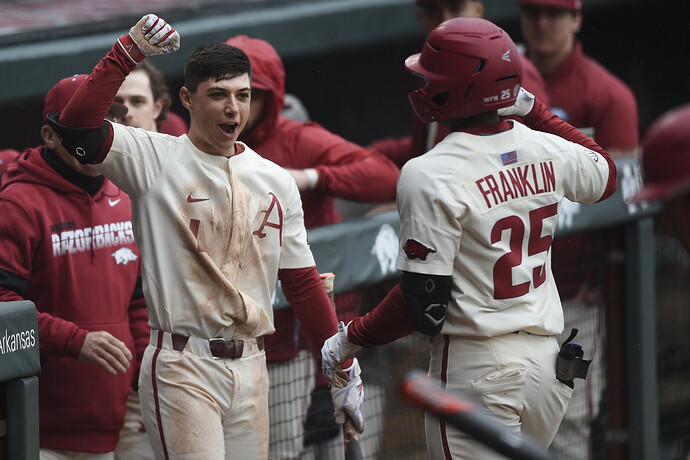 A tight vote in the predictions reflected how competitive the SEC West is expected to be this season.

Interesting Hogs have 3 out of 8 position players 1st team all SEC but no pitchers in 1st or 2nd. Not really having any reason to agree or disagree, it just shows the significance of the effect of 1 or 2 great pitchers in the lineup.

So looking forward to the baseball season, but I sure am hopeful that our pitching is as solid as the rest of the team appears to be.

Things can change, but I don’t see foresee any of Arkansas’ starting pitchers being first-round types.

I think the depth of the pitching staff will be the strength of the team by the postseason. But it can take awhile to solidify pitching roles — oftentimes into April, around the midway point of the conference season.

With all the uncertainty in pitching 3rd is about right, the games against the Texas trio will be quite a challenge even for an experience staff. Could go real well or real bad… We will see

Matt, what is the story on Conner?

I haven’t seen Noland pitch since the fall. He struggled in the fall series.

Van Horn was asked about him today and said this:

“He’s looking a lot better. His command seems better. He threw pretty well this last outing. If he’s not starting I could see him in a long-relief role. He has experience, got good stuff and I think he’s bouncing back.”

My big? With Noland is the thinking when he went Baseball full-time was his velocity would jump big-time and for some reason it has not improved much at all, saw him throw 91 as a freshman and maybe 92 last yr but mostly threw 89-91 has he been hurt? Because you would think just getting bigger and stronger each yr would have him in the mid 90s by now kind of like Palette has done

I was not under the impression that he expected his velocity to improve as much as his stamina. Either way, it will be interesting to see how he progresses.