I thought this reported survey might be of interest in demonstrating 1) the continuing influence of the nightmare of the Chad Morris Era, and 2) what a great job Pittman and his staff are doing against the Brand recognition challenge in reaching these high school athletes. After looking at these results, I am much more appreciative of RD’s notation of the positive reactions and surprise from numerous recruits visiting the Hill for the first time. Sam Pittman and his staff are doing a remarkable job recruiting against

Being around all things Cardinal Red and hearing WPS!! since '49, I forget the great majority of today’s high schoolers were not alive when the Razorbacks allowed the Gators to mount a comeback from a 21-17 deficit to win the 2006 SEC Championship Game. Some may remember Bobby’s post-Sugar Bowl Ill-fated bike accident or Bert’s failure-to-finish finishes, but in this survey of Brand Recognition most remember the Black Hole of Chad Morris’s creation. The four rolling survey period will begin to pick up the Pittman tenure as the majority of covered years and no doubt the Running Razorback will move back to its historical place of prominence.

The Razorback brand did not make the top 25 football brands in this ranking by CBS/24/7. I cannot imagine how a decently constructed survey of high school athletes would not have Razorbacks ranked higher than some of the teams listed but beyond the Texas recruiting area, we have not been “a top brand” in the four major recruitment areas - West Coast, Atlantic Coast, Upper Mid West, and Fla/Ga. Coupled with this demographic limitation, the survey’s rolling coverage of the previous four years hits the Chad Morris Black Hole. Hopefully, we see a better ranking beginning this next year after Pittman’s tenure becomes a more significant factor. 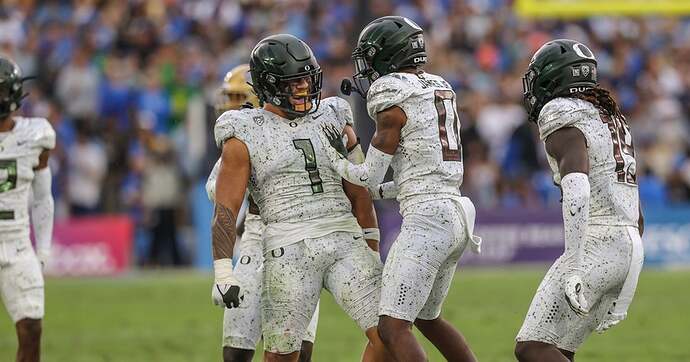 There is zero way the Chickens are a bigger brand right now than we are… Zero.

Well, with exception of a 1000 high players surveyed I would completely agree; I suggest the same would be true of the Terrapins unless we are going back to the NC team’s of Jim Tatum. I sense the survey would favor high school football player rankings and I would therefore conclude there would a higher number of respondents in areas such as the West Coast, FLA/GA/DC, Upper Mid West, and Texas/LA. Other than Texas/La we would likely have lower Brand recognition in those areas unless we were ranked and winning during those four years. I assume SC and MD plus NC heavily recruit that DC to Fla corridor plus Atlanta. I am only guessing in trying to account for SC and MD and degree NC. I have no idea why Miss State would be ranked so high nor Ole Miss for that matter.

Official visit did the surveys. Would be interesting to see where the kids were located.

I always ask some questions to waiters when we travel. They want to guess where I’m from. Most guess Texas. When I say Arkansas, that is generally greeted with a line that I’m a long way from Texas.

I then let them try to guess the state’s touching Arkansas. No one has ever got more than one. And they don’t ever think it touches Texas.

This was the case in Wyoming, Indiana, Ohio and Pennsylvania this summer. Jean Ann was disappointed with the results of my game. I’ve seen this for years.

Next time, ask them to name the states that share a border with Hawai’i. They’ll get that wrong, too. Geography is not a hot topic in public education these days.

I played blackjack with a guy who thought Arkansas was a foreign country, but on the flip side, I’ve never been anywhere (including the Philippines) where I didn’t spot at least one other person sporting Hog gear. I have a hard time believing that any serious HS athlete has no idea what school that Hog represents.

I had gone into a pub in London and the other patrons were interested in my accent. They asked where I was from and when I said Arkansas this old chap says “Ah, Pig Sooie and all that.”

As you may recall George Bush #40 once identified Arkansas as touching Texas and Oklahoma placing Arkansas somewhere along the Red River between the two states. Progress, I suppose recalling his trips were most likely only by air into NWA, Ft. Smith, or LR always somehow crossing the Red, or more likely being originally from New England where lived in three states, not paying much attention to state borders.

I guess we identified Wyoming by first Boyden Wyatt and then Fred Akers before we had the progression of the cable series. Since you mentioned Indiana, I suggest it is much like Arkansas in terms of the location reference points. It is somewhere in the midwest…“isn’t Notre Dame close by or Oh yeah, that the where Larry Bird is from…”

I went to work out in the fitness room at my apartment complex earlier tonight, wearing my Dri-Fit Arkansas baseball shirt with the A on it, no Hog anywhere. A teenager was in there with his mom and he wanted to know if the shirt was from Ashley High School, the closest high school to Casa SF. Uh, no. I’ve also been asked if the same shirt was for Alabama

Full disclosure, that script A is really close to Bama’s (I have no idea who had it first). Just don’t wear front-facing Hog or popcorn Hog. Both of those should be retired yesterday…awful. Get some Slobber Hog gear.

I had these hats made for my boys on my 50th birthday trip to Vegas. 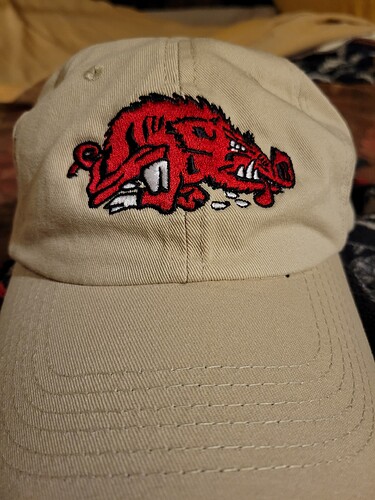 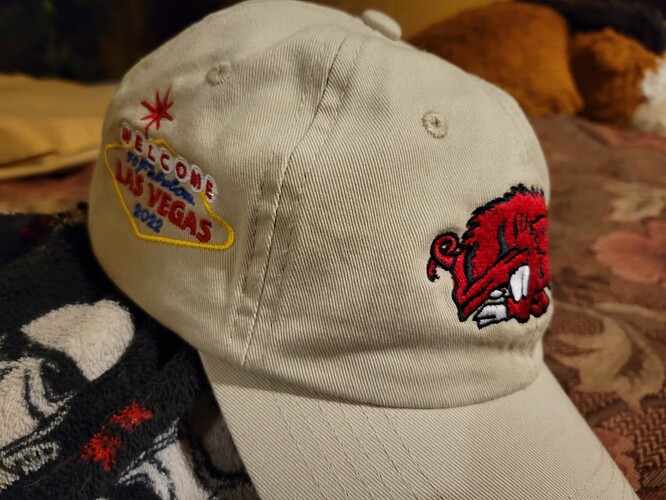 I agree with your premise…no hog, no brand…

I have two Houndstooth Hog caps left from probably 15 years ago that I wear on high identity occasions but go back to my A caps around town due to the longer bill.

There are so many great stories of Arkies finding Arkies all over the world wearing the Razorback logo. Awesome stuff. 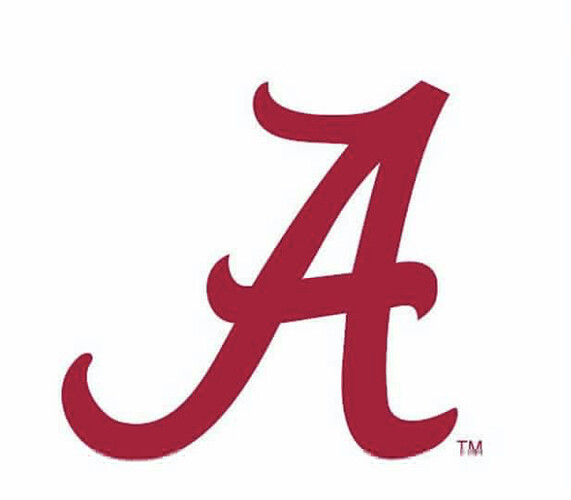 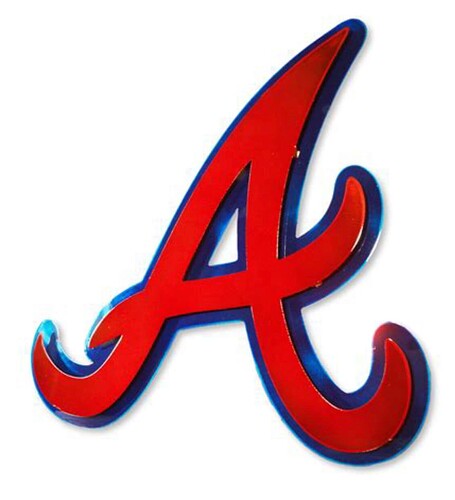 Arkansas baseball adopted the script “A” in the 1930’s. Alabama adopted their “A” logo in the mid-1970’s. I like to ask Bama fans how their Braves are doing. The Atlanta “A”and Alabama “A’ look alike.