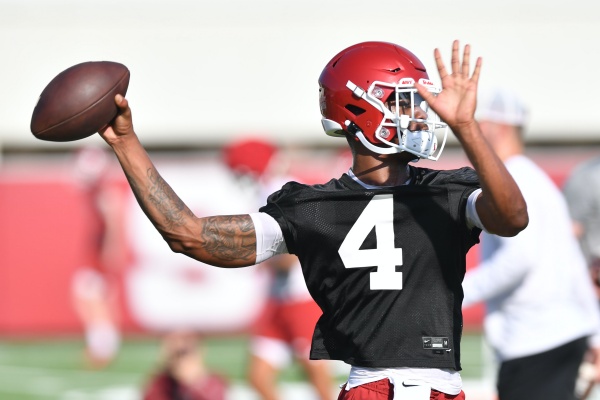 Notes and observations from Day 3 of Arkansas' fall camp

Takeaways from the Razorbacks' third workout of the preseason on Sunday.

thanks, Scottie, I logged on hoping to find this. you made my sunday evening!

Love it! I hope Jackson Woodard is making a move. Love that kid.

I think a reason Woodard ran with the 1s is two guys (Drew Sanders, Pooh Paul) didn’t take part in the Fastball Start. But he certainly is a guy the coaches like.

Here is a UA shot of the Haselwood TD catch I referenced in the observations. Unreal grab. 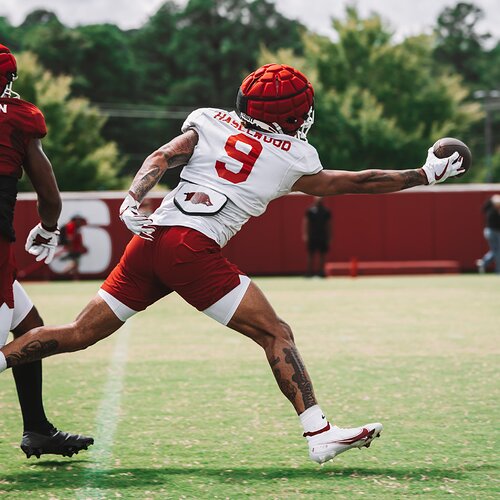 Outstanding shot, props to the photog, thanks for sharing.

Scottie, what is the “Fastball Start”? You have probably explained it in an earlier article, but I don’t think I read it. (My consumption of football practice reports is often hit and miss.)

The 1 offense vs. 1 defense for 4 plays and so on with 2s and 3s, as well. Thanks for asking. I mentioned it so often today that I should have had an explainer.

I hope JH doesn’t tweak his shoulder again in practice!

Scottie what’s the reason for Sanders not participating in this these?

Coaches likely wanting to evaluate other players at the position. They’re solid as can be on Rocket.

I am talking about Drew Sanders not in for 3 days

Honestly not sure, but maybe for some of the same reasons as Rocket. Identifying talent beyond the top two is paramount. Doesn’t appear to be injured when I’ve watched linebacker drills.

Yeah that’s kind of strange that he would not be in there with the first group. But there’s obviously a reason