Arkansas hit the field for Day 2 of preseason practice on Saturday. Here are a few notes, takeaways and observations from the 20-plus minute open viewing period:

• Got a good, long look at the offensive line in its work with Cody Kennedy this afternoon. Players definitely know what needs to be corrected or what they did well during a rep, because Kennedy is vocal and consistent with his feedback.

The first-team offensive line, from what I saw, looked like (L–>R) Myron Cunningham, Brady Latham, Ricky Stromberg, Ty Clary and Dalton Wagner. Found it interesting that Latham slid in at left guard to begin the day. He received a lot of praise from Sam Pittman in the preseason in 2020, but Luke Jones was thought to be No. 1 at the position entering camp after a solid spring. Jones still got the second-team reps at left guard.

Second-team offensive line looked to be (L–>R): Jalen St. John, Luke Jones, Shane Clenin, Beaux Limmer and Marcus Henderson. Also should note that Henderson and Wagner kind of split right tackle reps with the first team in position drills. The third team consisted of Drew Vest, Dylan Rathcke, Austin Nix, Ryan Winkel and Ty’kieast Crawford. Pittman monitored the group’s work for at least half the time we were allowed to take in practice.

A little later, Limmer and Clary played right guard and right tackle, respectively, in some deep red zone/inside drill work. It may be the first time I’ve seen Clary get any action on the right end.

• During the inside drill, running back Rocket Sanders bounced one off the left edge and got into the end zone from five yards out. Linebacker Chris “Pooh” Paul filled a gap on one play and made a solid stop that drew some praise from teammates and staff in the area. Also saw John Ridgeway moving some offensive linemen around. I think he’s been as physical as advertised so far.

• Koilan Jackson, who moved to tight end last season but has been hampered with injuries for much of his career, was on the field in a helmet and catching passes from a member of the training staff. He worked a lot in the indoor facility on Friday. Jackson is wearing a brace over his knee and did several knee-strengthening exercises before planting on the knee and running a short route.

It was good to see him out on the field in any capacity, but he appears to be a bit away from getting into the swing of things with his teammates and the tight ends group.

• In some of the 1-on-1s between receivers and defensive backs, which is probably one of my favorite portions of practice to take in, freshman quarterback Lucas Coley completed a nice ball to Jaquayln Crawford along the sideline. Crawford beat Joe Foucha on the play. Landon Rogers, another freshman quarterback, threw a wobbly, underthrown deep ball intended for TJ Hammonds with Jalen Catalon in coverage. Hammonds, I thought, played solid defense on the play to ensure Catalon didn’t come away with a pick.

On Rogers’ next pass, defensive back Myles Slusher made a nice play to force an incompletion. Rogers’ ball was intended for Ketron Jackson.

• On the receivers as a whole: Great competition in the group so far. Guys are working their tails off, and they know the competition is throughout the room. I can wait to see it all unfold.

• On De’Vion Warren: He’s a hard-working guy. You’re going to get his best and his all all the time. He wants to be great.

• Warren Thomson is doing great. You can see his potential. He hasn’t been in ball for a while. He’s in shape, but we’re trying to evaluate. It’s easy to see he has some potential.

• John David White does everything right. Everything on the field and off the field, he does the right thing. I always say the ball finds energy, and he is the epitome of that. He’s going to give everything that he has.

• On Trey Knox: He’s doing awesome right now. He wanted to know my thoughts on him after the spring. He’s a bigger guy, a bigger wideout, so we talked about what those kind of players do.

• Jaedon Wilson has exceptional feet, and Ketron Jackson is a grown man at 18 years old. I think all the freshmen are going to help us out in the future.

• Kendall Catalon has stacked days on top of days that are good. He’s not a loud guy who showboats. He’s just doing his job and stacking days.

• I think Bryce Stephens could be a natural return man. He’s the one who kind of sticks out right now. I could see De’Vion Warren getting back to kickoff return duties once he’s really healthy again. We’re being careful with his reps and being smart with him. 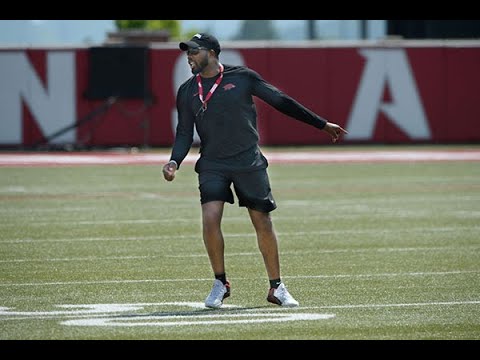 • The room is deep. A lot of guys who have played in this league for years, and young guys trying to find their way.

• JD White is a guy who is always going to bring energy. He’s always happy and ready to work. He makes your energy go up every time you see him.

• Warren Thompson reminds me a little bit of Trey Knox. They both know how to play with their bodies.

• We have a lot of talent in our room. As a whole, we’re very, very deep and have a lot of experience from the 1s through the 3s.

• I’ve had a pretty great offseason. I put on 15 pounds. I feel a lot faster and explosive. I’m trying to figure out how to play at this size. I’ve never been this big before. It’s been a pretty fun process putting on weight, because I’ve been a string bean my whole life. Putting on weight would help me play faster and be more explosive.

• We have confidence in KJ. He’s becoming a leader, and that’s what we want to see. He’s been dropping some darts. He’s been making some throws I didn’t know he could make.

• I feel like Ketron has it. He has a big frame. He’s doing things I was struggling to do as a freshman. Jaedon is a great route runner, and Bryce is a burner. It’s a talented group of guys who can help us down the line.

• I feel like Warren Thompson and I are about one in the same. He might be a little bit faster than me. He’s explosive. I think he’s a great addition and will fit in nicely.

A VERY impressive individual. We will have top level receivers with the way he handles himself. He can reach the guys and they can relate to him. More excited than ever.

Had to double check this… Trey Knox gained weight!!!

He did look bigger in the video.

I really like Guiton…very sharp! I’m surprised Knox Gained weight bc he was having problems seperating fand getting open…Hope he has somehow gotten faster and be a reliable receiver foe us.

The added weight should help him from being pushed around at the line in press coverage. I’m glad he put on some weight since he’s not a speed burner, he might as well play bigger.

Trey was impressive in his interview, well spoken, articulate and thoughtful, seemed confident and optimistic. His body conditioning was quite noticeable.

Trey was impressive in his interview, well spoken, articulate and thoughtful, seemed confident and optimistic. His body conditioning was quite noticeable.

He is a warrior renaissance man

He kills Hogs with a knife in close combat

Now that is All Arkansas right there

I think you are confusing Treylon Burks with Trey Knox. The latter is the subject of recent posts. If Trey Knox was known to kill feral hogs with a knife, I doubt he would get Pet Smart NIL money.

I’m told that Treylon Burks spent more of this summer in Fayetteville than chasing things in and around Warren like wild hogs. He has polished his skills in golf with teammates like Matthew Phillips and others. He has gotten good at golf. I would like to see how far he can hit a golf ball with those big, strong hands and limbs.

Trey Knox. He wanted to know my thoughts on him after spring ball.

Sorry if I’m not reading it correctly.

Those were notes from Kenny Guiton’s availablity, so Guiton said those things. Knox wanted to know what Guiton’s thoughts were on his spring and where/how he could improve.