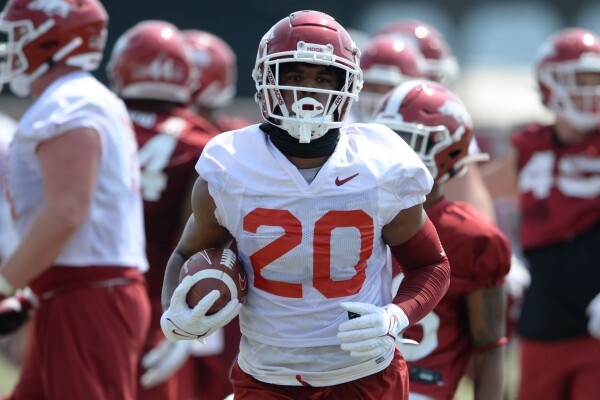 Notes and observations from the Razorbacks' football practice on Monday, the first day of classes for the fall semester.

Mcglothern still 3 rd team CB… not sure what’s going on there. We must be trying to send him a message.

Maybe I’ll be wrong on this, but I don’t believe he will be the third-team corner during the season.

Yeah I can’t see him being third string. Reading between the lines he’s the best cover corner I think we have but there’s something going on here.Maybe they’re trying to send a message to him so he will not be so cocky or mouthy Someone that tall and fast you would think would be close to first string. He was by far the best in the end zone coverage against the wide receivers that we were able to see a couple of weeks ago and it wasn’t even close.

I heard someone say (trey? Scottie? Matt?) that he had been battling some injuries, so maybe he’s just coming back from that? or maybe the coaches are sending a message. eitherway, I expect to see him on the field a lot.

Matt and I both wrote last week in a thread that Barry Odom, I believe, mentioned a McGlothern injury early on in camp.

Okay I must have missed it… I was in Atlanta most all last week so haven’t been on as much.

He has been slowed by an injury.

That second OL has to be huge.