Arkansas went through its fifth day of preseason practice on Tuesday. It was 93 degrees in Fayetteville with a heat index of 100. Here are some notes and observations from the open portion of practice:

• Fairly active practice today for the Razorbacks’ tight ends group. I did not see Hudson Henry on the field and I did not see Levi Draper, who moved to the position from linebacker over the weekend. Henry has dealt with injuries throughout his brief career at Arkansas, and you hope this isn’t another instance of that. If he is healthy, he is Arkansas’ top dog in the room.

Dominique Johnson, who began training camp as a running back and worked there all throughout the spring, was at tight end Tuesday. At the end of spring, Sam Pittman said he thought Johnson would have to factor in at running back on account of him being one of the few bigger-bodies backs in the group.

Koilan Jackson was on the field with tight ends coach Dowell Loggains and his teammates going through position drills for the first time this preseason. Jackson has had knee injuries pop up during his time here. I thought he looked pretty good cutting and running, though we didn’t get to see him stretch his legs and run full speed. I will say that he, by far, has the quickest feet in the room.

• The Houston Texans, New York Jets and Cincinnati Bengals had scouts/reps at practice.

• Right tackle Dalton Wagner was wearing a tan wrap around his lower back. Could be one of the reasons why Marcus Henderson has been getting a good amount of reps at right tackle the last couple of days.

• Wide receivers and defensive backs did their 1-on-1s today. The ball was snapped from the 7. A number of the top plays we saw:

KJ Jefferson threw incomplete for Trey Knox with Montaric Brown in coverage. Jefferson also threw incomplete looking for Jaquayln Crawford against Greg Brooks, who is having a solid camp to this point. Crawford later had a drop in the corner of the end zone against Jermaine Hamilton-Jordan. Lucas Coley put the ball on the money.

Malik Hornsby hit Treylon Burks and Kendall Catalon for scores on his first two throws. Burks beat Simeon Blair and Catalon beat LaDarrius Bishop. Safety Joe Foucha had the only interception during this drill, picking off John Stephen Jones as he looked for Chris Harris, a walk-on.

John David White caught a pass on an out route and dove for the pylon with Jalen Catalon in coverage. Coley hit Warren Thompson for a score, beating Hudson Clark. Landon Rogers found Ketron Jackson for a score with Devin Bush in coverage.

Myles Slusher did a great job breaking up a Kade Renfro pass in the back corner of the end zone intended for Burks. I really like what I’ve seen out of Brooks and Slusher so far. Both guys are tough and play with an edge.

TJ Hammonds had a score from Hornsby, putting his shoulder into the chest of Nathan Parodi near the goalline to create a good bit of separation. Freshman Bryce Stephens also caught a touchdown pass from Renfro after beating Zach Zimos.

• On Jackson Woodard: He’s a really hard-working kid. He worked to get faster and in better shape this offseason. He’s smart. If you can learn as quickly as him, you can get on the field a little quicker. He studies a lot. I know if I throw him in there he’ll be fine. He’s going to be a good, solid person to have in our room.

• On Grant Morgan: He makes my job easy. When he does things, he’s going to get things done right. He’s a leader in our room and on our team. What you see is what you get from him. He makes my job much easier.

• We play in a physical, tough league and I have a bunch of kids who can play at a high level.

• Hayden Henry is tough, loves to hit people. He’s not far off from Bobby Boucher, but he’s a lot smarter. I love having him in the room and he’s going to make our room a lot better.

• I love DeDe Edwards and he adds a special dynamic and brings guys closer. As soon as I kind of had an idea that I might be here, I called him and made sure that he wasn’t going to go anywhere. He does things the right way. He has respect of his teammates.

• Woodard, Andrew Parker, Chris Paul, they’ve all been coming along. You lose five seniors after this season. The seniors, though, have shown the young guys the way. They’ve made my life easier. If I’m pushing the old guys, then the old guys push the young guys.

• On Paul: It’s hard at linebacker to come in as a high schooler and pick things up in college. He did a good job of growing in the spring, changing his body up. He came here around 250 and now he’s around 230. The more reps he gets this year, the better he’ll be. I have confidence down the line that he’s going to be a good player.

• Kelin Burrle needs to keep working on his body and continuing to learn. He’s learned more than he ever has before. He has a good idea of the playbook. Once you have that down, now you can study an offense. JT Towers, it’s about progressing his body and skill as well. Eventually they’ll be able to step in and help us.

• On Bumper Pool: He’s a tough kid. He wants to do anything he can for this team. The last thing he’s going to do is take himself out. As long as he can walk, he’s going to play. He’s going to be really good this year.

• In recruiting, I like guys who are tough, smart and fast. Have to be a good person, too. Those are the kids who seem to have the most success. I’m trying to build bonds with kids. When you do that, it becomes genuine. Hopefully they’ll feel comfortable around me and know I’ll do whatever I can for them and to help them.

• I get my playing style from my dad. When I lived in Atlanta as a kid, he used to tell me that if I knocked a kid out of practice or a game that he would take me to Dairy Queen. The game is meant to be played with a certain amount of toughness. I appreciate guys, too, who play with that style.

• I haven’t had a position coach connect with me like Coach Scherer. It makes the learning environment very fun to be in. It’s a tight group. He’s the reason for that. We appreciate how much he cares for us and pours into us. He knows the system so well, so for him to teach us, it’s easy. He played in it.

• DeDe Edwards has a contagious spirit. He fills the locker room up with his energy. He’s one of the most selfless people on the team. He cares about everyone. He’s an even better player. He would do anything for anyone. To host recruits as much as he does, you have to be a stud. He’s one of a kind.

• I just love how tough and physical our team is. It’s the most physical team I’ve played on. It’s exciting to watch the guys battle and how the program has transformed.

• You guys’ job was pretty easy talking about linebackers in recent years. It was all about the depth, and it was true. I’m liking our depth right now.

• I tore some stuff up in my elbow last year on both sides. The brace worked fine. You would have to cut my arm off to get me off the field. I feel like it maybe screwed me over with some interceptions.

• On Edwards: He’s unique in his own way. He may not sound like you, talk like you, but everyone relates to him. He works hard. The fact he’s still here and fighting with us means a lot. To see us grow up and be together through the years has been awesome. 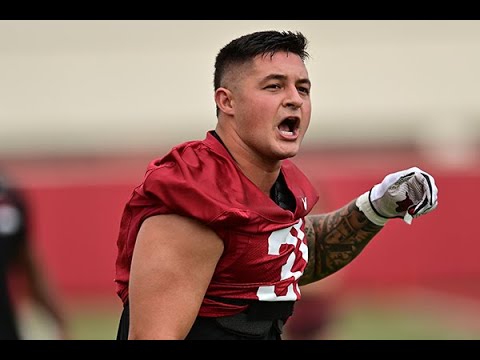 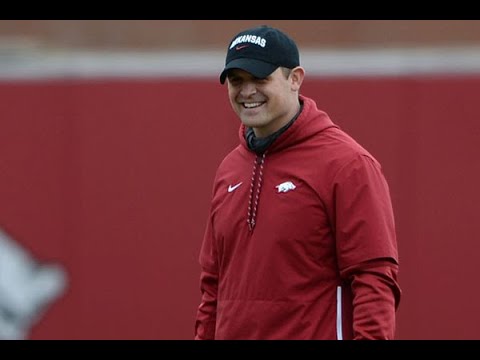