At practice I always like to watch where players hit in the lineup. I think it’s telling about where the coaching staff thinks they can fit into a lineup in a real game. There were the batting orders yesterday (two players in each spot in the order because there were two teams).

There were the positions yesterday:

Some other notes that I wrote down from yesterday:

• I’m continually impressed when I watch and listen to Bobby Wernes coach. He might be the loudest voice on the field. He did a couple of things that stood out to me yesterday. First, after a strikeout, Max Soliz whipped the ball down to third base. That’s a no-no at Arkansas. Wernes looked at him and calmly said, “Max, We don’t do that. Throw it back to the pitcher.” He is also constantly encouraging the hitters and saying, “Work hard for (insert the next hitter’s name).” Volunteers typically work on two-year agreements. I think someone will give Wernes a shot at a full-time role next year.

• Zack Morris’ pitches have a lot of sink to them. I thought he showed a good curveball yesterday.

• I was impressed with Dylan Carter, the right hander from Bentonville West who played last season at Crowder College in Neosho. He walked Brady Slavens on a 3-1 pitch with two outs, but that was his only blemish against a stacked part of the order that included Drake Varnado and Robert Moore.

• Cayden Wallace looks great at the plate. Before the home run yesterday, he drilled a double to left field off of Nathan Rintz. This is potentially a draft year for him (the 2022 draft date hasn’t been set and he is borderline draft eligible) and I think he’s going to have a big year.

• Drake Varnado is going to show some power. He swings hard.

• There were approximately 60 people in the stands, including about 10 scouts yesterday. It was great to be back at the ballpark. You can learn so much about a team this time of year.

Varnado needs some more lead in his pencil, it’s easy to tell the freshman from the older guys, lots a size/build difference. I though D. Leach started as catcher for the white team the first inning, or two? I know when he made the third out as he was hustling back, they told him “no hurry” and Soliz went to catcher. I could have missed it though, as I was still catching up with the red team’s lineup.

I think Morris will have a Great yr,arguably the best stuff on the staff,if he can locate,he will a impact Pitcher for us. Who Is Pinckney??

Leyton Pinckney is a transfer catcher from Houston. I don’t see him winning the job over the other catchers on campus. He had some decent hitting numbers in JUCO but didn’t get many opportunities at Houston.

Where is the Stovall kid from Shreveport?

He has abdominal strain, being held out for now. doesn’t appear serious.

I wrote on Stovall and others yesterday. 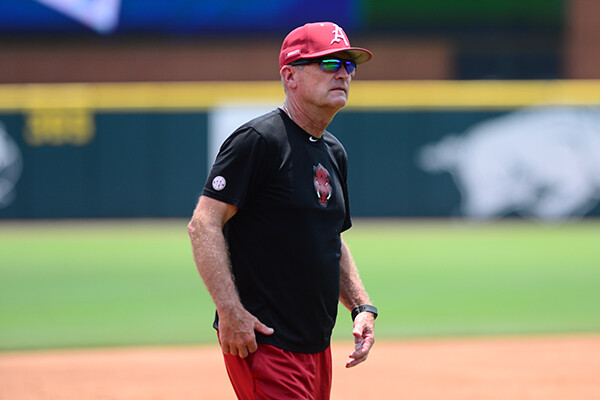 Arkansas baseball fans are being invited back to the ballpark this fall.