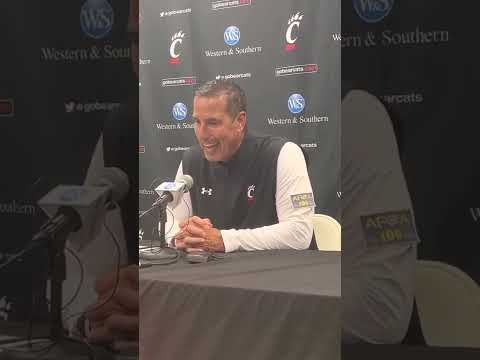 He’s a fine coach. They were well-prepared, and have talent. I like Pittman just a bit more, of course, but this guy is really good.

He’s as good as they come and he will be getting a big time job in the very near future. Very well prepared team who made a lot of first game mistakes but they will not lose again with their schedule.

but they will not lose again with their schedule.

Easier to recruit in (and win in) Ohio than Arkansas. What Pitt is accomplishing after we fell completely off the map is amazing.

Yep Ohio is one of the five best recruiting states in the country so I knew they would have good solid players yesterday.

Interestingly, theOSU recruits nationally and Cincy is able to sign many of those solid Ohio HS players that the buckeyes pass on.

I saw that too, very impressive. Really impressed with his team, his demeanor, his presser. And like Sam, I’m glad that games over. Wore me out.

I would guess that’s a job where, if you make the playoff, people are not surprised to find you there. One where being in contention is an expectation.

Suppose move to the Big 12 takes care of that issue next year. Of course some folks don’t consider the Big 12 a major conference😎. I wouldn’t discount Cincinnati as “expected”. Seem to be recruiting well thus far for 22. And BTW I’m not a Cincinnati fan by any means.

I believe he would get high interest for a SEC job if one came available. I believe any of the blue blood teams would have high interest in him because if he can do that at Cincinnati he can do it at a lot of places. One that would probably pay him a lot more than he’s making at Cincinnati.

He’s making $5 million a year at Cincy. That ain’t chicken feed. And he’s about to move into what’s left of the Power 5. A lot of people think his next stop is either going back to Ohio State, or to the NFL.

I think Fickell has done a great job at Cincinnati. He’s a good coach, and being in the Big 12 will certainly give the Bearcats more legitimacy. I definitely had a healthy respect for them even before our game on Saturday.

People just don’t expect Group of 5 schools to make the playoffs. Even though they went undefeated last year, they would probably not have gotten in if they had not played and beaten Notre Dame.

Yeah I can see Ohio State if that job who came available and can also see the NFL angle as well
He will have quite a few opportunities to move on up in the coaching ranks. 5 million is good though I didn’t realize he was making that.

With auto bids for conference champs and Cincy going to the Big12, Cincy might be a better job than Arkansas

I am guessing he had a shot at Arkansas job three years ago. He won’t go anywhere unless it’s Ohio State. He is on every short list every year. If Ryan Day leaves, Ohio State will call Fickell.

I heard on some podcast that cinci has 72 Ohio hs players on their roster. SEVENTY TWO. Wow, what a recruiting hotbed, and subsequently, what a Job

Ohio State recruits nationally now - leaving the State of Ohio, and its great high school football. to other teams, including Univ Cincinnati. Kentucky Wildcats sign a fair number from Ohio too.

They also have Kentucky to pilfer. They need only to cross the river to be in some other nearby areas of Kentucky with some good players.

He had a shot at the Notre Dame job this time too.