Players on the return of Casey Opitz

I spoke to some players, including Casey Opitz’s roommates this week, about his return to the Razorbacks’ baseball team. 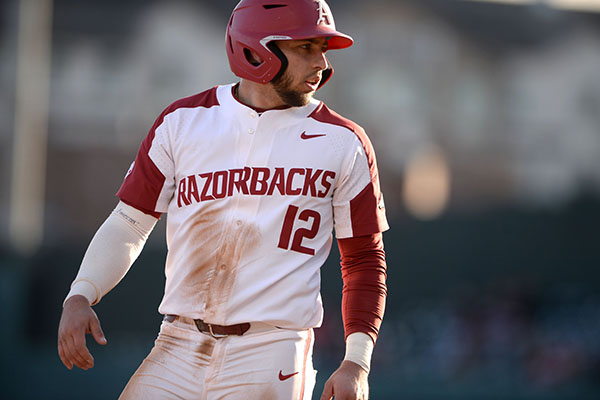 Mixed feelings: Players disappointed for Opitz, but happy to see him return

When it comes to Casey Opitz not being drafted last week, there is a similar theme around the Arkansas baseball program.

Sounding more and more like Casey knew what he was worth and stuck to his guns. Knowing he had the option to come back as junior again and really shine on a good team.
Also great for both the older and younger pitchers with him behind the plate knowing how to work the staff and the plate.

There were 10 catchers drafted recently…

The top 5 catchers taken were projected by many to be drafted in first 3 rounds. (Tough to project high school catchers, as they often get moved to other positions). Number 6 was a surprise by some, and possibly (?probably) agreed to less than slot.

So, looking at the 4 college catchers (Dyer is listed as a utility player, and might project to another position) drafted 7-10 on the list above, it seems as though Casey believes he’s worth $500,000 or more, while the teams apparently disagree. With his defensive skill set (most people project catchers into the Bigs based on defense, not their bats), there’s just no way there should have been that many college catchers taken before Opitz. Thankfully, for us, there were.

Casey tweeted that he was called with multiple offers (“we’ll draft you here if you’ll sign for X”) and X was never good enough. The bottom four probably agreed to X, or even less. What Opitz didn’t say is what round they started calling.

This draft was all about saving money for the teams. Five rounds instead of 40. $100,000 bonus limit immediately. $20,000 limit to sign undrafted players. I suspect all those calls Casey was getting, the X figure was below the slot for that part of the draft. I also suspect someone is going to wish they’d given Opitz a decent offer when they had the chance. They won’t get him that cheap next year, since he still has leverage thanks to getting the year of eligibility back.

He’ll be 23 years old at next years draft. His best, an maybe only, leverage will be that he will likely be one of the best in the country.

My mistake, he is 21 and 10 months. Still, as likely the best defensive catcher in the country in '21, that is fantastic leverage. History seems to show that leverage for 4th year junior pitchers is different than the same scenario for position players.