Looking over the numbers from my analytics subscriptions, I noticed one area Arkansas was really struggling offensively without Isaiah Joe was 2-point field goal percentage. Decided to create charts for Razorbacks players in the 5 games he has not played in.

A few takeaways:
• Desi Sills and Jimmy Whitt haven’t shot/finished well in the lane in this span. Whitt has also been pretty bad on looks outside the lane on the right side of the floor. That’s fairly alarming.
• Adrio Bailey was perfect in the painted area until Saturday when he missed two layups. He’s also been really solid from 3 – 6 of 9. I don’t like the long 2s he takes and never will.
• Jalen Harris is 1 of 13 outside the lane in these 5 games.
• Sills is virtually the team’s only threat from 3 in the corners.
• Mason Jones has taken a lot of really tough 2-point jumpers lately – 2 of 15 on the left and right sides of the floor combined. One of his makes from the center of the floor was Saturday when he had his right foot on the line. That wasn’t ideal.
• Ethan Henderson has to finish more than 2 of 6 shots around the rim. Has to.
• Reggie Chaney is shooting 60-plus percent in the lane, but SEC length has impacted him a bit lately, primarily at Missouri and against Mississippi State. He’s been fine. 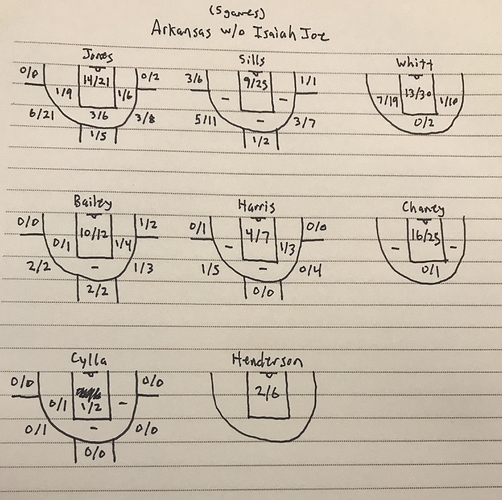 With Joe on the floor it occupies 1 or 2 defenders attention! That’s what hurts Whitt and Sills. Joe is a weapon and the hugs Miss his defense!

One of his makes from the center of the floor was Saturday when he had his foot on the line.

Good point. Move that right toe back a few inches and the tip-in forces OT, not wins the game.

If ifs and buts were candies and nuts the Hogs would win more games! lol

Dumb mistakes! That’s what gets you beat! Not if and buts!

Based on the shot charts, it looks like a few more set plays to get Sills open for 3-pointers might be in order-not a lot but a few. He needs space to shoot the three. While he is certainly fearless driving the ball to the hole, rim-protectors seem to give him a lot of problems.

Also maybe we are better off playing Chaney and Bailey at the same time more, with Bailey looking to occasionally shoot a three after setting outside screens.

A seven man rotation can work in college basketball-if all seven can play. Any rotation works poorly in the long run when only four or five guys meaningfully contribute in a given game-with a changing mix of three or four either doing very little or making critical mistakes.

Based on the shot charts, it looks like a few more set plays to get Sills open for 3-pointers might be in order-not a lot but a few.

Are there any set plays in this offense lately? Haven’t seen much. It is mostly ISO ball by Jones, Whitt and Sills. Especially when Harris is not on the floor.

If I’m adding up right Whitt is 21/61 in those 5 games. This from a guy that had 30 in a game just a couple of weeks ago. Man, given how close our losses have been if he’d have hit a few more shots we’d have won at least 3 more games.

Knew he was struggling but that’s a huge difference from earlier. He hasn’t helped Mason enough.

Also maybe we are better off playing Chaney and Bailey at the same time more, with Bailey looking to occasionally shoot a three after setting outside screens.

Arkansas hasn’t been bad with them on the floor together. About the only downside to this pairing is the team’s turnover rate spikes. Here are their numbers for the season when on the floor. Defense has been solid and they’ve defended the 3 really well (HoopLens): 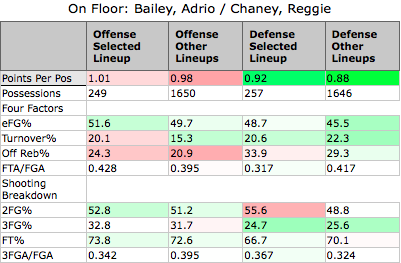 I like the thought of Reggie playing the dunker spot and Adrio on the perimeter kind of floating. Teams are going to have to start honoring his 3-point shot, surely. He can help space the floor, and should there be dribble penetration, Reggie can catch and finish at the rim - if he doesn’t travel.

I am glad to see Bailey and Chaney playing together. It has made a difference in not getting out rebounded as bad.

As I said before, we are short on size, but Musselman is not even using the size we do have. So, glad to see that change.

However I do realize that Joe’s injury is what triggered Bailey and Chaney playing together. And once Joe returns, Muss may go back to a 4 guard lineup.

I think if we get Joe back you play mix in the three and four guard looks. Chaney and Bailey both are foul-prone and are not going to generate much initial offense in the low post without guard penetration, but it helps a bit with rebounding and it does mix up the offensive look a bit.

It’s also hard to keep Chaney and Bailey on the floor all the time because the two other forwards have close to zero offensive game and tend to have more defensive lapses(I think I see a faint glimmer with Henderson, but maybe I’m just wishing it to be true).

The real problem with the guard heavy look we have to play right now is that, while we have a couple of really talented guys and a third who is rapidly improving(Sills), we really are a player or two short of the type of guards needed to put us at a consistently higher level on offense. All of our guards can play team defense, which is the main reason why we keep hanging around in games where we should be getting whacked. But we don’t have a second big guard who can penetrate and score/get fouled, we haven’t had a third guy that can knock down threes consistently, and we don’t have a slick ball handler/distributor. Just one of those additions would make a big difference in a guard heavy line-up.

Getting Joe back would be a big plus, maybe big enough to go on a big run. But of the three “lacks” among the guards, the only one that we can perhaps do something about the rest of this year is for someone else to start consistently hitting a couple more threes a game.