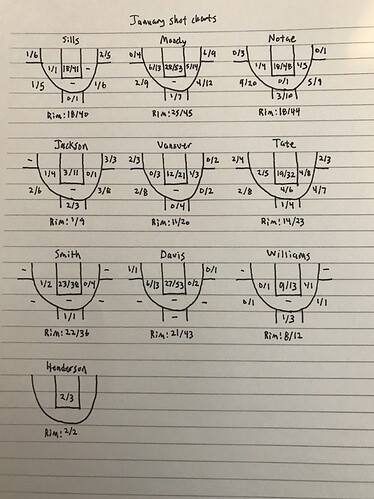 Just curious, what is considered “acceptable” at this range?

I think you’d like to be in the 58-60% range as a team. Last year’s team finished 64% of its shots at the rim. Really good individual finishers are typically in the mid-60s percentage-wise.

Thanks goodness for smith Williams and Tate. Sills and notae below 50% as guards.

Looks like we need to work on getting Henderson to be our go to guy at the rim.

Need to find more shots for Williams in the offense. My goodness, he’s too offensively gifted to be shooting so few shots per game.

He’s been much more of a ball mover than a threat to score lately. I’ve said it before, but I’d like to see less hesitation from him on the perimeter. Pull the trigger and make defenses play you differently. He’s shown he can put the ball on the floor a little bit, too.