Yurachek got what he wanted on that one, Base pay is $3M but it goes up $250K per win if we win 6-8 games. Buyout also decreases if we let him go for not winning enough games.

For those who want pay tied to performance (and I don’t disagree with you), HY found a coach (and agent) who was okay with that. We’ll see if it becomes a trend.

IF the stories on Sexton are true that HY declined to play that game, that would be a good trend to see take hold as well.

I thought this was an underrated part of the contract as well. It actually does help stem the tide a bit of the buyout culture becoming increasingly unsustainable.

In our case I agree it is very good. However, we had zero chance at a big name and did a great job of getting our new coach. I doubt very much if it changes the upper level contracts however. Wish I was wrong. I hope we struck gold on this one.

I think we could have gotten Kiffin if we’d played Sexton’s game but HY wasn’t going there. I wholeheartedly approve of that decision. We got the right guy,

I would speculate that Hunter’s deal is getting a lot of approval from other AD’s. And possibility be copied on hires like Sam.

But Sexton won’t agree to it on currently successful coaches.

I would speculate that Hunter’s deal is getting a lot of approval from other AD’s. And possibility be copied on hires like Sam

I doubt if Drink would have taken an offer like that from us. Or from Misery either. But maybe it will take hold.

I agree Jeff. But for hires like Sam it could start a small trend.

It’s fair to all. Sexton would disagree.

Sexton’s job is to get as much money for his client as he can. He’s very good at it. However, it sounds like his ploy on behalf of LK failed because HY wouldn’t play. Sexton is like Scott Boras in baseball, who just got Stephen Strasburg that huge contract to stay with the Nationals. If I were a coach, I’d hire Jimmy Sexton. If I were a pitcher, like Dallas Keuchel, I’d hire Boras.

Yes, this is great. It’s the first time I’ve seen “salary” increases for numbers of wins. These aren’t bonuses, they are recurring increases in pay. I’d like to see the final detail of how, or if, they would work incrementally. If, in his 2nd year, he wins 6, his salary goes up $250K. What happens if he wins 8 in his 3rd year? Does it go up another $750? Or does he only get $500K, since he’s already been paid for the 6th win? Obviously, if he wins 8 in year 3, he will probably get a new contract that will exceed these numbers anyway.

I hope he works miracles and hits those numbers in years 1 and 2. Certainly not likely.

Dunno. @MattJones are you going to put up a PDF of the offer letter? I’d like to see how they worded that myself.

According to Trey Biddy he’d also get a million dollar bonus for winning the NC, $500K for playing in the NCG, $200K for making the CFP or a New Year’s Six bowl, $100K for any bowl and $150K for a slightly higher level bowl such as Citrus or Outback (or whatever they’re called now).

Yeah, I saw those. They are the regular one time bonuses that most contracts have. I can’t wait to see him get a million dollar bonus.

The reason I’m anxious to see how the $250K raises will work, is the words “in any one year”. That would tend to make you think he can actually increase his salary by $750K every single year he wins 8 games or more. I wouldn’t think that was the intent, but those 4 words read that way.

The reason I’m anxious to see how the $250K raises will work, is the words “in any one year”.

Here is the contract in the best format I can get to work on this board. 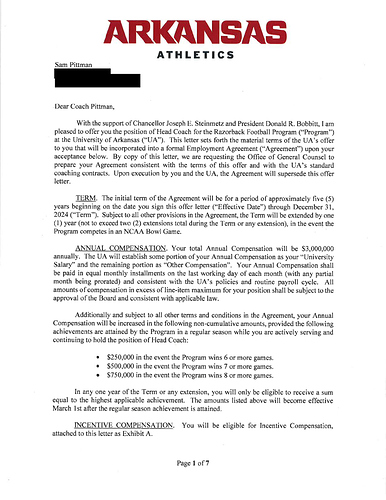 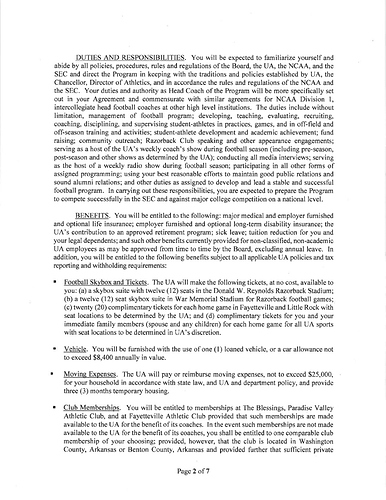 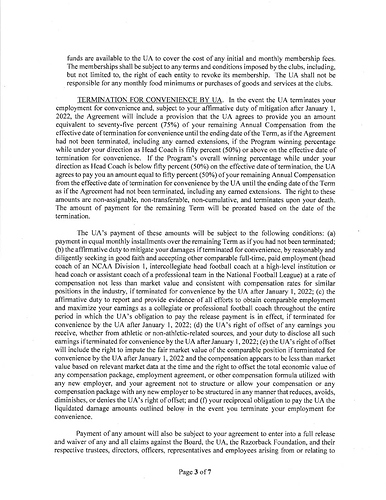 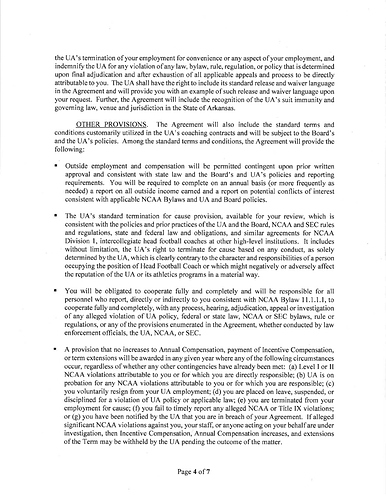 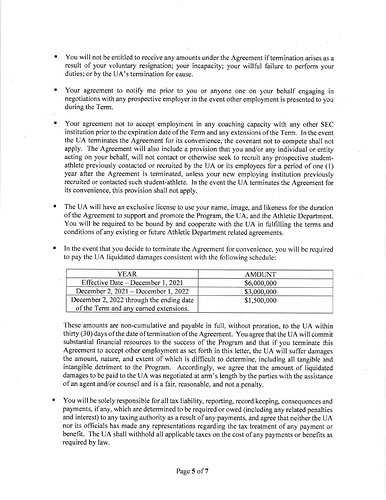 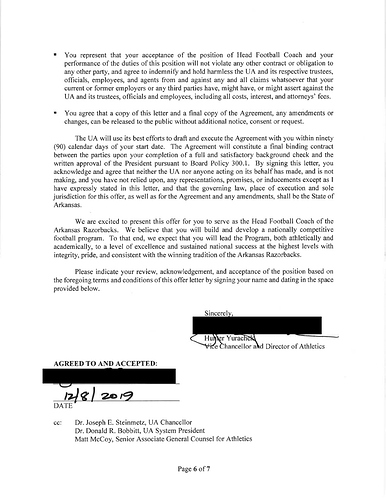 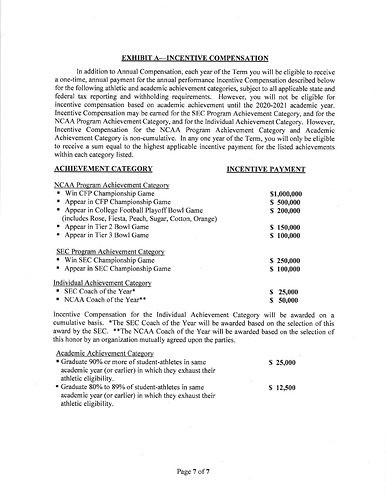 Based on my interpretation of that wording, Pittman would get an annual pay raise if he hits those benchmarks. So for instance if he won six games next season, his annual pay would be bumped to $3.25 million beginning with the 2021 season.

I think we have about 300 lawyers on this board who can tell me if I’m wrong.

Based on my interpretation of that wording, Pittman would get an annual pay raise if he hits those benchmarks.

The word noncumulative appears in there too. If he somehow won 8 games twice, he wouldn’t get two $750,000 raises. But if he did that, they’d tear this up and give him a new deal anyway, I suspect.

Isn’t this pretty much what arlingtonhog posted would be the way to go for HY?

And which pretty much everyone who responded shot down as absolutely not the way to do it?

Couldn’t agree more on how HY handled Sexton - especially if he told him in no uncertain terms something to effect, “hope kiff enjoys his time in oxford”!