I think we will hear something very soon on the final details of Sam Pittman’s contract. I’m told it has been finalized.

I am told my deal with Hog + did not jeopardize Sam’s deal. I negotiated really hard. My agent (Jean Ann) complicated the terms. But I got what I wanted (weekends off). It was something JA said was not on the table.

Good question. I work for everyone. Radio, magazine, fly shop. I am a part timer in the truest sense.

I know that feeling and it is good. You are working for yourself as a private contractor doing what you want pretty well when you want (always some give and take on timings). You guys want to call a meeting - fine. If it is somewhere I want to go about something I am interested and I can take Pam, I will be there. If not, I pass.

Sam Pittman’s new contract begins at $5 million per year through the 2026 season. 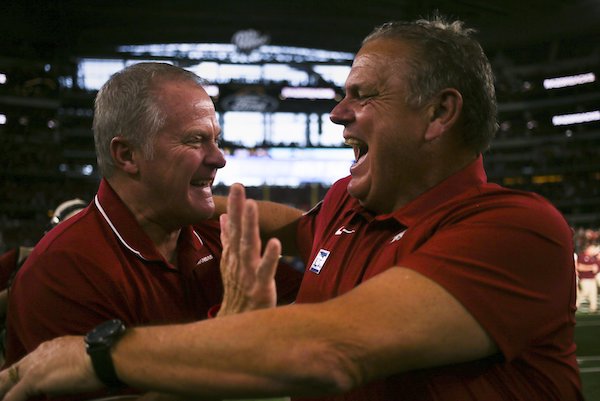 University of Arkansas football coach Sam Pittman has signed a contract extension through at least 2026 that will pay him $5 million per year with escalators based on performance.

Yes, coach’s salaries are escalating. For example 10 years at $95 million. Will it ever top out?

The reason CSP salary jumped, because he’s worth every darn penny and more! Thank you Coach for the restoration of our football program, we were lost and floundering in the most competitive conference in college football. To top it off our coach may be the most humble man in college football in my opinion. WPS

I agree with CSP salary raise. It’s the other humongous salaries out there. Mich St coach is 13-7 after 2 years and gets $95 million?

You could still call him underpaid looking at the other salaries reported in Matt’s piece, glad to see Sam proving that he really wants to be here and going the incentive route.

The Twitterverse is already filling up with “he better earn it; 12-11 ain’t gonna get it done” garbage.

The Twitterverse is already filling up with “he better earn it; 12-11 ain’t gonna get it done” garbage

That’s a Great deal for Sam and I know he’s happy and I hope he be very successful for all those yrs.

Sometimes trolls claiming to be fans post those negative messages.

Sometimes trolls claiming to be fans post those negative messages.

You’ve got a point.

Well… If I was, say, a Rebneck and I really thought Sam would fail, I’d be happy to sit back and watch HY throw money at him. But that’s just me.

I like hearing the rumors about AU looking at Lane to replace Harsin. That’d be the 2nd time in the last 20 years or so that Auburn stole an OM coach. If I were betting, I’d bet Lane is subject to being lured away from Oxford.