Smith & Wiggins both should have several pitches left in them. The problem of course is that they haven’t been reliable for 2-3 weeks. If they can come in & pitch like they did earlier in the season, we should score enough against whatever OSU has left to win. But as we know, it’s a big “if” for both Wiggins & Smith. Vermillion is also a crap shoot.

I was very confident yesterday afternoon knowing how hard both OSU & Most had to work and had played one more game than we did. Obviously that confidence was misplaced. Today I have very little confidence. Maybe that lack of confidence is just as off base.

I hope both can give us a couple of good innings. Ramage seems to be good for about 1, but after that, it gets “iffy.” Not sure how much either of them have left.

No, but there may be a tuba player in the band who can go for an inning or two.

I think the biggest problem with pitching in this ballpark is that these guys have watched so many balls fly out of the ballpark, pitches that would normally be fly ball outs.

So you enter the game knowing you can’t really pitch to contact and have to paint the corners. I think being so careful to not throw one right over the middle leads to trying to aim the ball in very narrow targets.

Heck, even when Tygart threw one low and away and slightly out of the zone last night, they reached out and hit it. The two he was directly over the middle were hit hard, one off the wall and one over.

So there are going to be some walks. And likely a hit batter or two. We need to realize that going in.

And some are actually good walks when you are being very cautious and trying to get them to chase. We just have to hope they aren’t lead off walks.

OSU pitchers I think are feeling the same way with our lineup. I think that is what happens when each team has scored 20 or more runs in a game.

We need those hineruns to be solo. What hurts is walking a couple then seeing it leave.

yep that is what has killed us is bc we must always make sure make our 1 BB an inning quota,then Bam! Multirun HR

Anyone care to take a stab at who Oklahoma State’s most likely pitching candidates are for tonight?

I think they Start Campbell their ace for an inning or 2 just to hopefully get them off to good start but “if” we are aggressive like the other night we can hit him.They can also come back with Mederos who started Fri for them for a couple inn,that would give them 2 starters for 4 inn and the 5 for BP to finish but that is risky bc if they were to win both would be working on short rest in the Supers but lose tonight there is no Supers and why I think They start their best.

It is lucky for us that one of their three weekend starters is evidently injured recently and has not been able to pitch yet. His name is Bryce Osmond. Does anybody know if he’s able pitch again this season or more importantly tonight?

His name is Bryce Osmond. Does anybody know if he’s able pitch again this season or more importantly tonight?

I understand it’s a shoulder & he is not available tonight.

So you enter the game knowing you can’t really pitch to contact and have to paint the corners. I think being so careful to not throw one right over the middle leads to trying to aim the ball in very narrow targets

I think you make a very good point. The ump’s strike zone last night seemed pretty tight. That’s going to make for walks & pitches right over the plate. Perhaps the pitching isn’t so bad as it is they’re having to face incredibly tight zones. (Of course, some of our pitches have missed badly.)

The umpires strike zones I think are very much a part of why the scores are up because they’re not giving you the corners very much and if you give both of these teams the good part of the plate they’re going to hurt you.

That’s why the changing of speeds has to be a good part of the game plan to keep them off balanceso that you might can get away with the pitch in the middle of the plate, especially to the lead off hitter who is nothing but a dead red fastball hitter, he is the key tonight’s game, if we don’t control him we will not win the game more than likely, he sets the stage for everything they do, he is their engine.

a world series was won on Spahn and Sain and pray for rain… Coach intuition and hunch seems to be the determining factor as to who is handed the ball. So be it. Even if DVH is wrong, he is right and he is in charge although maybe Hobbs has a modicum of influence. Anybody else get fired up when McEntire was obliterating the weighted balls in the dugout on that peculiar one pitch pull? Not a lot of emotional pitching leaders in our dugout, find one and do what Clay said to do “when in doubt, throw hard”. 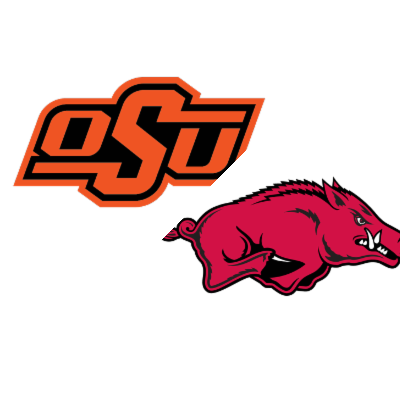 Get box score updates on the Oklahoma State vs. Arkansas baseball game.

I told a friend last night that the team that hit the most SOLO HRs today would be the loser.