I understand covid and safety for the athletes and everyone else that is associated with the programs but the way it was handled makes me look at TCU with a side eye! Did they not give any kind of update or hint to the Arkansas AD or our Head coach about there could be a chance that they can’t play in the bowl? If our players were on the bus or at the airport and found out within that small window about the game being canceled, that is beyond sad and terrible communication! Coach P from TCU had to know that his numbers were very low all this week and had to have some kind of idea and at least give our athletic department a chance to try and find another team if he lets us know in time… #VERYDISAPPOINTING

I agree. We will never know the truth but since there was no communication from our AD prior to today whether the AD from TCU even hinted that there was a problem it really makes you wonder! It is like one guy said we should have canceled all bowl games. On to basketball!

Could it be TCU didn’t want to be bludgeoned by a 3 win SEC Arkansas?

Our team could have had to cancel today because of the test yesterday, too. Does not take many positive tests at a position to do it. Not sure what they were dealing with but it happened with other bowls, too.

This could have happened the other way, too. I get the disappointment. It sucks.

As I understand it, the SEC and Little Dozen had approximately the same rules as far of number of available players, total and at key positions. TCU apparently had some injuries as well as positive tests and contract tracing issues that took them below one or more of the required player numbers.

They also had some opt outs that affected those two position groups, DL and DB.

I am ready for 2020 to be over too. Mary has a scan at Mayo on the 6th. Results on the 7th. She’s feeling great…so we anticipate good news. But its still nerve wracking.

If the results are totally negative, the screams you’ll hear on the north wind will be my family.

Don’t down play TCU and their reaction time. Covid is a killer and very unpredictable. I’ve lost some very close friends here in NE Ar. I have a sister in law in intensive care at St. Bernard now. She was well one day and critical two days later. Crazy times.

How many were 18-22 years old? The thing is, all the schools have usually said stuff like, “we’re concerned about our COVID numbers, it’s close”, instead our guys are getting on the bus to the airport and it’s “no game.”

instead our guys are getting on the bus to the airport and it’s “no game.”

Considering the issue is number of available players, the answer is basically all of them. If the coaching/support staff gets zapped, you have to play. Not enough Frogs to play under the LD protocol considering positive tests, contact tracing, injuries and opt-outs, and evidently Monday’s testing took them under the limit. If we’d been scheduled to play Friday or Saturday, yesterday’s testing would have still wiped out the game but we wouldn’t have been getting ready to get on the bus.

From the TCU student newspaper: 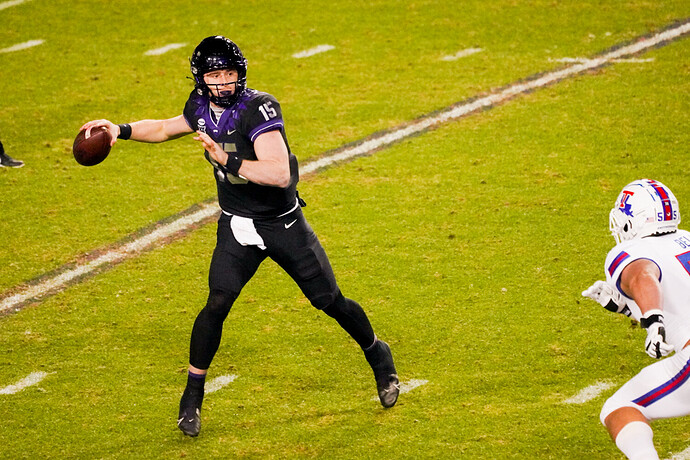 The Mercari Texas Bowl has been canceled.

If you bothered to read their league policy, it was the same as ours:

“Additional minimum thresholds of available players were also established for offensive linemen (7), interior defensive linemen (4) and quarterback (1). Teams falling below any of these benchmarks, based on game week test results, could still elect to play as scheduled if so desired”

So, they could have played with less than 53 scholarship players, fact. Also, they had other problems, opt outs, injuries, and academic issues, according to other TCU websites.

Also, the question on age was dealing with his comment on people dying and in the hospital. I fully understand this is a terrible disease, I volunteered 5 months ago to be in a vaccine trial.

On the positive side, we were able to get a lot of additional practices in, getting ready for the bowl game. These were very important for the development of our team. Now on to Spring practice!

Some SEC teams DID play with numbers under 53 this year, but they had the numbers at the positions that they felt they were still competitive. No doubt, TCU could have decided to play. That’s on Patterson. As I said, it sucks.

No one questioned covid! I’m big believer in Covid and its toll so you can miss me on that one! I still say it was piss poor communication

We understand Covid positive tests taking players out and the contact tracing that goes with it.
In the TCU statement the bothersome words are “other circumstances”. “Over the last 24 hours, between a combination of COVID-19 related issues, injuries and other circumstances, we have fallen below the established Big 12 Conference threshold for student-athlete availability that we have abided by all season.”
If other circumstances are players opting out “to prepare for the draft”, that’s an issue college football has to address. Players opting out and not finishing their team’s season need to be penalized somehow. Make them pay back to the university the full value of their scholarship. Have the NFL step in and say any player opting out and not finishing their team’s season will not be part of the draft and will be subject to the minimum free agent’s salary if picked up by a team. It’s time for the NCAA and the NFL to say enough is enough. It’s sad, and you see it filtering down to the high school level where kids are playing for a scholarship and not their team, They are playing for the name on the back of the jersey and not the front. .

Nothing makes sense this year. I don’t like the transfer portal either.

The message is bad. But I don’t see things going back the other way.

Giving coaches millions tells the players to look out for themselves. Their coaches live in mansions. They have very little.

Many of the players who opted out signed with agents and took money. Many have poor families.

The schools do not want players to get royalties or licensing funds.

It is all complicated. The quarantine rules and isolation players were asked to abide by to play the games were unusual. They were college students without the life of a college student.

No easy answers this year.

This Razorback Team has had to deal with adversity and disappointment on a level that just leaves me respecting them that much more
Covid, SEC gerrymandering the schedule to use Arkansas as practice fodder

What are the expectations of a player on scholarship? When does the scholarship end? If a player opts out while the season is still going on, even if it is just one game, should there not be repercussions? If drafted maybe their signing bonus should be returned to the university. When did opting out start, it wasn’t in 2020? Can’t blame that on Covid.

Thats sounds good but that’s just not going to happen