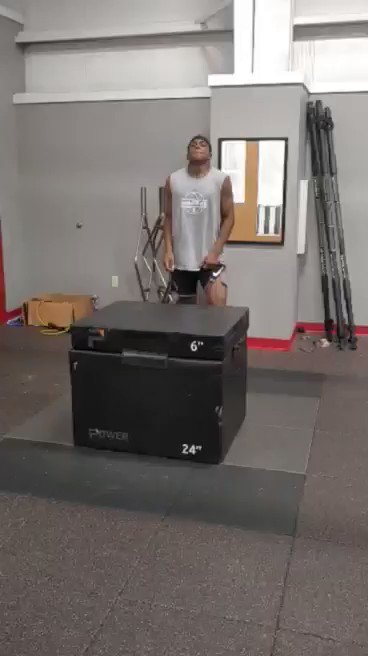 She was doing them as a 35-year-old third grade teacher just a few years ago and broke her foot on an off-balance land. Her doctor, surgeon Mark Powell, asked her how she injured her foot. She told him box jumps. He said, “So are you chasing third graders or are they chasing you?” The point: you are past the point of needing to do box jumps. Now, for her daily workout Sarah rides the bike or runs on the treadmill.

Moral here, Richard eliminate the box jumps. Now. Or you will be in a boot soon.

(I know you aren’t doing box jumps Richard. There are no middle age sports writers who can do a box jump.)

I wonder how Sidney Moncrief or Alvin Robertson would have handled that exercise routine? They are two of the strongest pound for pound athletes that I can recall at Arkansas. I am guessing the box is 24"-28" high. It looks shorter than a desk which is 30". I bet Ford’s vertical leap max is close to or well over 40". The fact that he can jump onto that box is not a huge leap for him, but the strength and control required to jump forward and up onto it and then backward and down to do it repeatedly shows very good strength and power. Losing your balance and landing badly is the danger here, not the distance being jumped.

When I was losing my weight last year one of my circuit stations was always box jumps nowhere near that high,but at age 59 I just stepped up on the boxes LOL! Knew good and well I wasn’t going to try to jump on them and end up hitting the back of my head on the concrete… definitely for younger people

It is an exercise that is extremely tough on knee ligaments. It improves speed. Doctors detest this particular exercise, but trainers know the strength added in the muscles used in the box jump equates to pure speed. There is no question that Sarah saw her speed jump. She was already one of the fastest athletes on the soccer field.

It’s interesting that she never missed a soccer game because of injury and that’s club soccer, high school and college. (She did miss some junior high basketball because of a bad ankle sprain.) She was bothered by a foot injury as a college junior that doctors worried was building into a stress fracture. But she took treatments and kept playing.

She told Dr. Powell it was her first real injury when she broke her foot. So her exercise routine (and she was diligent in her running and gym programs) throughout her playing career) had to figure into that. ACL injuries are extremely common in soccer but her knees were always good. But it was time for her to eliminate the box jumps.

I could no more jump on that box than I can fly to the moon! I couldn’t have done that when I was high school playing football (not that tall of a box!). My vertical jump, even back in the day, was, well, “limited.”

I do that routine too. With a shoebox.

Every now and then we need to be reminded what an elite athlete can do.

Richard, as an old guy I’ve learned if you sit on the box for 10 minutes the urge to exercise goes away.

Same for jogging. Just lay on the sofa for 10 minutes and boom you won’t get up.

Good grief…if I tried that now my knee caps would shoot across the room after the first one!!! Impressive.

As they say, “with age comes wisdom”. I’m glad I’m wise enough to know not to do that. I figure I get enough exercise getting out of my recliner.