I spoke with Peyton recently about the injury he suffered and working back toward pitching from the mound. 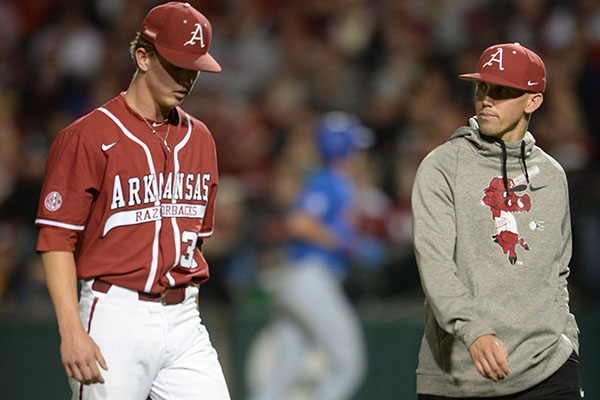 Within the next two or three weeks, Peyton Pallette is expected to begin facing live hitters on the same mound where his pitching career came to a pause earlier this year.

Awesome News! WE need him badly and sounds like he may be OK.DVH said he was throwing Extremely well and thats exciting,we need him like that all next yr.

His injury derailed a deep run and trip to Omaha. I just hope the young man can come back and be effective.

The article states that Baseball America rates Paulette the #1 college pitcher in next years draft! That is awesome. I had no idea he is rated that higher.

Love to see Peyton become the best pitcher to come out of Benton. Which is a tall order considering Cliff Lee is from our adopted home town.

Was Blaine from Benton? I know he played high school at Bryant.

I love Peyton but I’m really confused how that could be… ERA was over 4… when he was on he was very good but he had outings where he got the ball in the middle of the plate and found out in this league that will get you killed… I would love him to pitch like the #1 prospect, hopefully he will.

Sorry Matt, he is from Bryant not Benton.