What has happened to this kid’s recruiting? Does he have any offers?

He signed with UCA.

Speaking of UCA QBs, there was a QB we were looking at last year for a PWO spot. He was a DT guy and looked like he had a lot of raw talent. Did he ever see the field this year?

I think you’re asking about Darius Bowers from Fayetteville. According to UCA’s stats he did not play this year.

Payton Brown is not a football player. He is a basketball player from Waldron.

Yep. Whoops, thought we were talking football. DT meaning Dual Threat. I have no idea why I thought that.

Payton broke his dad’s school record for points in a game last night. His dad, Jason, scored 58 in a game vs. Paris in 1993.

Sounds like his game might be too big for that moribound program. Surely he had better offers?

Sounds like his game might be too big for that moribound program. Surely he had better offers? 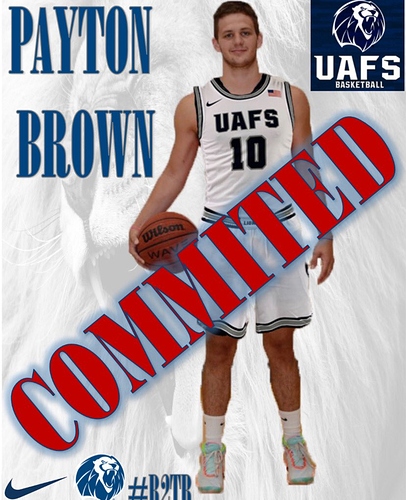 I would like to Thank god & everyone that has Supported me Family, Friends Coaches & The Bulldog Community. With that being said after talking with the Coaching Staff at UAFS. I would like to announce my Commitment to be a UAFS Lion 🦁 & to further my Academics,Basketball Career!
Baumbastic_Hawg closed April 12, 2021, 12:18am #11