Pat Forde on the Bielema lawsuit 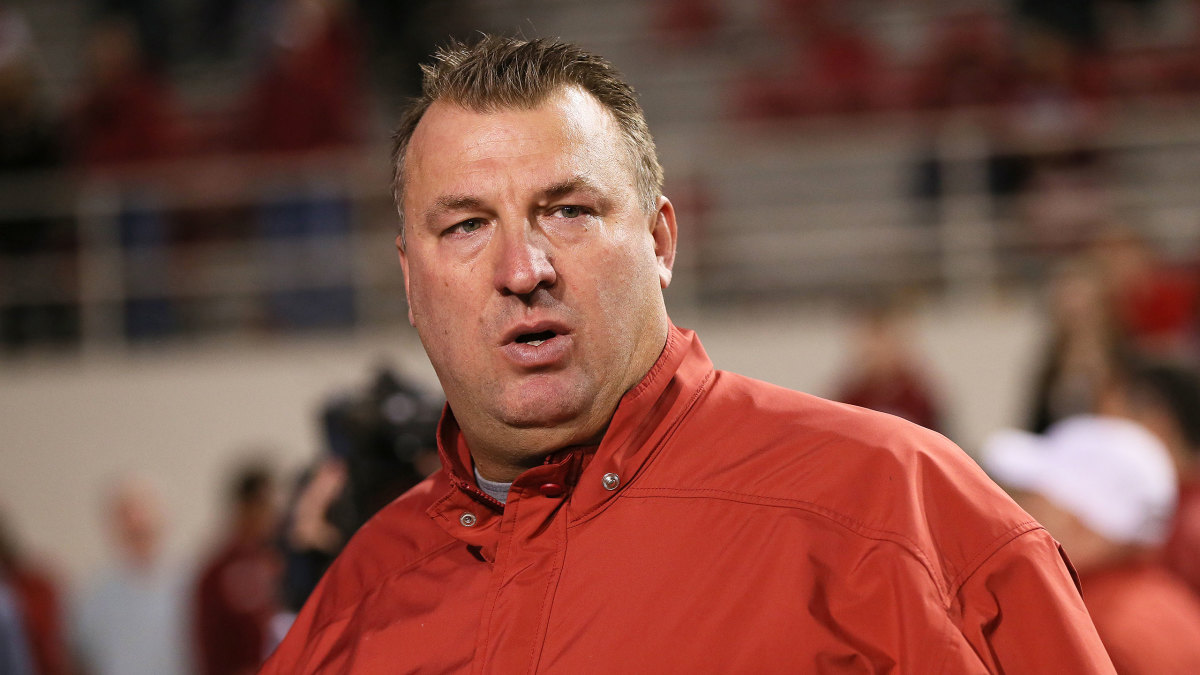 The former Razorbacks coach is suing for $7 million, and the school's financial mismanagement could haunt it.

Doesn’t say much we didn’t already know. Gotta see how the facts develop.

I think RF is in big trouble here. More I read about this, worse it gets. Leaking stuff to Wally is not good for their case.

They better settle quickly. Bielema probably will settle for less than 100% of the money. He doesn’t want to pay Mars and the gang a lot of money either.

I’m afraid you’re right about that. I was one of the suckers. Although I didn’t understand why we had to make his extension as lucrative as we did.

I was there too and thought we were on our way, but saw no reason to give him the farm then. Perhaps you could do with incentives such as not to forget a game last 4 qtr., not 3 and maybe recruit SEC players.

I enjoyed beating Texas, but noted in my game story that it was not a vintage Texas team. It was probably in my lead. And, it was sure not a vintage Arkansas team either.

Leaking to Wally? Hell, they leaked the same info to lots of RF members, I wouldn’t call telling their plans as leaking. I assume they have proof, text/email, of this leaked info, lol. I was told in February of that year that they were stopping payments, as were other donors. I’ll await the rest of the story before I throw in the towel. There’s a reason there’s always two sides to a story/suit, the truth lies somewhere in between.

PJ, I’ve said from the start when you bring Wally into any of this you better be careful. He wouldn’t know the truth and couldn’t tell if it he did.

I am just quoting the lawsuit that says RF leaked the information to Wally and Wally published it. And Wally admits that the lawsuit quotes it correctly in his column.

Wally is sneaky and agenda driven no doubt, but in this particular case, seems to me that by publishing that information, Wally was actually helping RF and hurting Bielema. That is what the lawsuit claims.

It us up to RF lawyers to prove otherwise. Let’s see what they come up with. They may link drinking with withholding payments and judge may let them.

I see what you’re saying. I cringe when I see Wally’s name. It goes back to when Nolan was first hired. I’ll never trust or believe anything he writes!

It goes back to when Nolan was first hired. I’ll never trust or believe anything he writes!

That I agree with it.

Wally & his paper (then the Democrat) were never fair to Nolan. John R. Starr was awful to him. And they were that way when Nolan’s daughter was dying of cancer.

As I said in another thread, Wally seems to like the bad coaches, and he rips the good ones.

Wally and Starr were so cruel during Nolan’s darkest time. His daughter was so very sick and they were ripping him every day in the paper! Wally never apologized. He’s lower than low.

He has no conscience. He has done other things for which there is NO excuse.

Exactly Marty, the issues mentioned are all bad. But there is much more. The other things you mention make my blood boil.

Beliema has enough self-inflicted baggage such that him prevailing in this lawsuit is still questionable & an uphill battle. The RF foundation could legitimately request payback of the $4 million paid to him or at worst should settle with no more payments made to Beliema. A good RF attorney with facts should successfully convince a jury.

Did Beliema put forth good faith effort in finding a comparable paying coaching position per terms of the agreement terms rather than violating the agreement by taking a voluntary role & therefore living off of the RF funds?

Was RF generous & respectful of Beliema by firing him for poor team results & performance, OR should RF have fired Beliema for cause that would have exposed Beliema & damaged his reputation due to his nightly drinking binges that: 1)hampered his abilities to perform his duties & manage staff & the team or 2)turned away recruits by showing up at their homes inebriated,& 3) continued the same pattern of drunkenness from his days at Wisconsin? RF did not damage Beliema’s reputation. Beliema did that on his own, & for him to remain at UofA was a big risk of embarrassment to the program.

Beliema’s request for compensation for damages to his reputation in the lawsuit, opens the door for RF to expose his character issues & poor & embarrassing choices while representing UofA. There are plenty of bartenders, recruits, designated drivers, & bar-mates who will attest to his actions. As a highly visible public figure representing the UofA, Beliema was contractually obligated to display a reasonable standard of integrity & character to fans, recruits, players, & the public, but his actions were contrary to those standards. With court backlog due to COVID, a trial or settlement may be years away.

Have read the many negative comments about Wally & his contempt for the UofA. After reading his following recent comment about the Beliema lawsuit, I now understand & agree: “The foundation thinks it is right, and Bielema knows he is.” Local reporters should be fair & objective & perhaps support the local teams & fanbase when justified, but Wally’s biased writings prove otherwise. In the future, I will skip past his articles.

Did Beliema put forth good faith effort in finding a comparable paying coaching position per terms of the agreement terms rather than violating the agreement by taking a voluntary role & therefore living off of the RF funds?

The lawsuit also states Bielema personally made contact about the openings at Nebraska and Arizona State, and his agent made contact with a search firm aiding Arizona in the months after he was fired by Arkansas. There are references to other schools since.

I’ve read a sum total of 1 _ally _all musings in the past 10 years. I regretted that one mistake.

“The foundation thinks it is right, and Bielema knows he is

That is a typically stupid Wally claim.