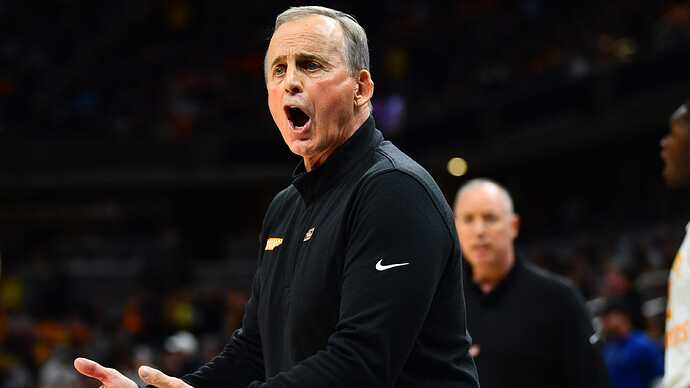 Nobody blows it in March like Tennessee coach Rick Barnes | Opinion

How good must a Rick Barnes team be to make a deep March run? Tennessee looked like it could make the Final Four but instead collapsed to Michigan.

Man that was tough…I’m guessing Barnes won’t have Wolken over for dinner anytime soon.

I really respect Rick. He’s a class act who teaches his players more than basketball. But, unfortunately his record in March can’t be ignored.

Peripherally related, but I have to give props to Juwan Howard for consoling Kennedy Chandler after the Wolverines knocked EOE out. Chandler, who played AAU ball with Howard’s son Jett, was in tears, and Howard took the time to comfort him.

Well it seems like the winking in March hasn’t went Barnes way! The matchup with Michigan was a tough draw.

Barnes could care less what Wolken or either of the 2 local writers have written after the latest round of 32 loss. He earned a $400K bonus from the new AD for reaching that benchmark and a total of $1million in bonuses since the end of the regular season. This week, his contract was also sweetened and extended for 1 more year. That makes the 4th extension in the last 5 years at Knoxville. His average pay for each of the next 5 years is $5.77M. I think he is the 3rd highest paid SEC MBB coach behind only Calapari and Pearl. As long as he is rewarded handsomely for a fanbase pining for MBB relevance, he will stay here and the pundits can only rub their eyes red.

As long as he is rewarded handsomely for a fanbase pining for MBB relevance,

As Mike Anderson can testify, borderline relevance only lasts so long. You better start playing deep into March at some point. Especially at nearly $6M a year. They ain’t paying that much for the first weekend.

I’ve known Barnes was a good coach/mentor but I also knew of his March Madness not so great record.
Tennessee is excited with Barnes and as long as he can beat Vanderbilt and get them invited to the dance every year they’ll keep him.

The Vols don’t have to apologize for where their team is in the SEC. From where they were to being respected and feared, do you roll the dice and hope for a better outcome.

Tennessee is excited with Barnes and as long as he can beat Vanderbilt and get them invited to the dance every year they’ll keep him.

Maybe. There is still a sizeable, vocal contingent of fans and boosters here that would be very happy to have Pearl back on Rocky Top.

Pearl is trash on two legs.

Pearl is trash on two legs.

Your opinion doesn’t mesh with theirs, but I happen to agree with you.