I don’t know what will happen when he puts on pads in a few years, but Wyatt Gage is a terror as a 7-year-old in flag football in Loveland, Colo. I believe he gets it from Ginger, not Jeremiah. I saw him score two long TDs yesterday in his flag football game.

One was a 50-yard run on the old Statue of Liberty play. The other was a reception on a bomb. It’s hard to imagine a 7-year old snagging passes with those tiny hands or someone his age throwing that pass, but I saw it over and over in practice Thursday and then in the game in live competition. I was amazed. Wyatt isn’t the biggest and there may be a couple on his team a little shifter. But not by much. It is a little unfair to see this bunch throw it around like that against unsuspecting defenders. (I know, don’t say it. Don’t hijack the thread.)

Oh what fun he has. His grandmother is over 6-foot tall and played for the Lady Razorbacks. So he has a chance to be tall. I enjoyed my time with the Gages on the tail end of my elk hunt. I stayed in Loveland four nights. Jeremiah cooks great. The elk hunt was terrific, but hanging out with Jeremiah, Ginger and Wyatt is nothing short of a treat. I love them dearly.

Here is a picture of mighty mite Wyatt. And some Fred Flintstone like beef ribs. Gage also fixed a pasta feast and chili relenos. 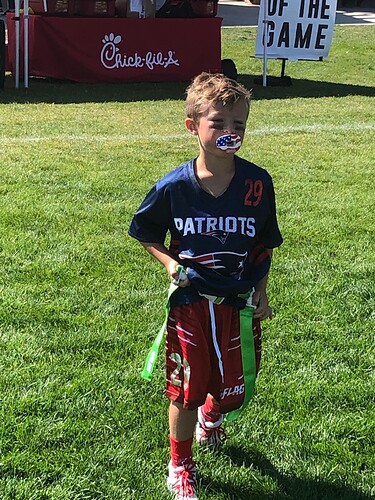 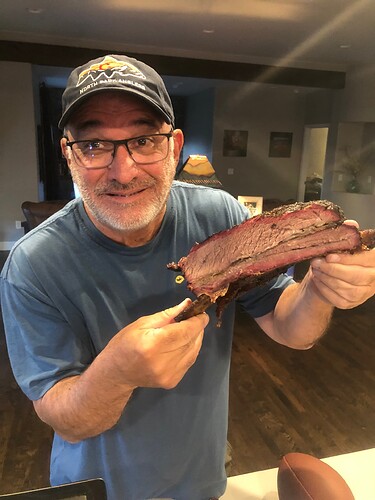 He wears his McFadden (or Rocket) jersey all the time. He is all Razorback.

I took him to a fly tying conference last spring. Bass Pro was giving hats to kids. They had all colors. He was asked what color hat he wanted. He clearly told the man, “Give me the one that’s Razorback red.”

That made me laugh. Bet that made you smile.

Three of my grandsons played flag football on Signal Mountain here. Now two of them play Middle School football. But my youngest grandson plays still. He caught two TD’s Saturday. Here is a picture of him and his 13 yea old cousin. Notice the jersey’s they are wearing. They love our Hogs. And way to go Wyatt! 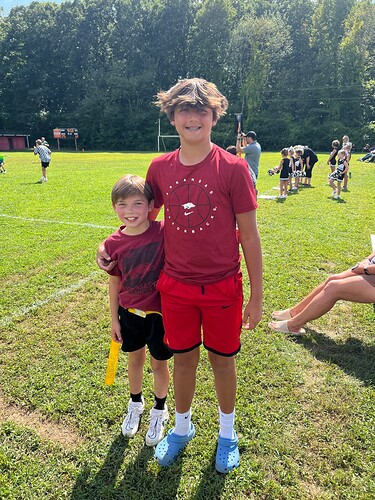 Correction: Wyatt is 6. He turned 6 five weeks ago. Most of the others are 7.

He knows what he’s doing on the smoker. The bark and smoke ring on that short rib are proof positive. Fantastic.

Those games are fun. I drive from CO to Russellville to watch my grandkids play. One year I watched a 6th grade game instead of watching the Hogs. Of course the great Chad was the coach. The 6th grade team was probably the better team. They were certainly more fun to watch.

I was a little younger but grew up watching & later playing alongside the Gage brothers in Ozark. One of which is Jeremiah’s Dad. They were typically late bloomers, Travis being the most naturally athletic, Rick was the fastest and was drafted by the NFL-Rams out of AR Tech. Steve (RIP) played everything as well & just a super person to be around. So Wyatt comes by it naturally / genetically.

I wish I knew how to post video. I have one of him snagging a pass over his shoulder. Beautiful. Then he scooted down the field in a flash. Amazing video.