OT (though related to Fayetteville, AR)

The first week of September is the annual Best-in-the-West Rib Cook-Off here in Reno. This year we had 21 outfits competing for $20K in prize money, humongous trophies … and of course, bragging rights and priceless free pub.

Many of the teams were from here out west (Nevada, California, Oregon, Idaho, & Montana) … but also quite a few came from back east, including the usual suspects: Memphis, St. Louis, & Texas. The one I was keenly interested in sampling was Porky Chicks BBQ … from Fayetteville, Arkansas.

Tastes are certainly individual preference, but sad to report that Porky Chicks produced some of the worst ribs of the entire festival: undercooked, way too much fat content, and their sauces were so bland that they couldn’t hide the shortcomings of their ribs. 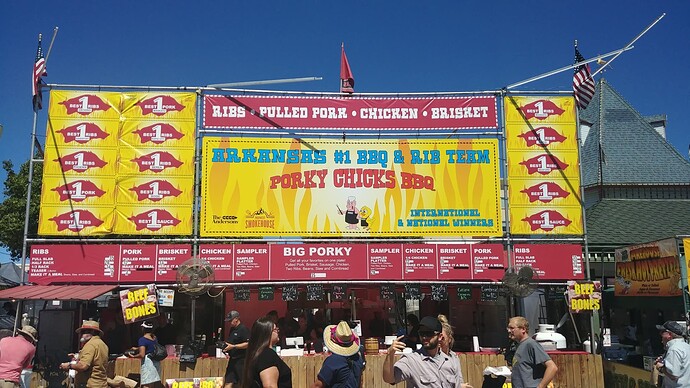 Maybe being Hog Fans from Fayetteville they were all for giving a hog a nice suntan but couldn’t abide cooking one to a crisp.