OT: This is kinda freaky

I’m planning a golf trip to Scotland next year with my friend from Omaha while I’m still young enough to enjoy it. But I don’t want to just stick to the famous courses like St. Andrews and Muirfield. I want to play some that are off the beaten path. One of those is Brora Golf Club, which is a seaside links course in northern Scotland above Inverness. They have a webcam overlooking the 18th green which is kinda cool. 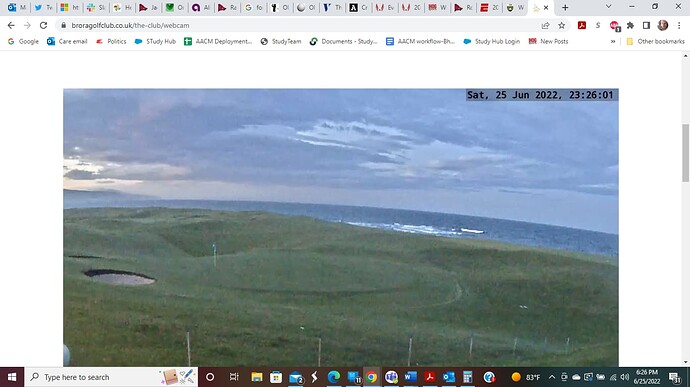 This was the webcam image a moment ago. Note the time at the top: 23:26 is 11:26 p.m… And you could still see to play golf if you wanted. I have played golf in considerably darker conditions than this. The reason it’s still light, of course, is that Brora is almost as far north as Juneau, Alaska.

Yes, it is far north. When in Inverness, perhaps you can visit the clan where Jamie and Claire spent time. The Frayser and Mackenzie Clans are still thereabouts.

Play as much as you can Jeff. My regret on my trip over there was spending too much time in England and not enough Scottish golf. It’s so cool playing those courses and you’ll never forget it.

That’s the idea. Dr. Omaha wants to play the Old Course, and that’s fine, but most of the trip will be tracks like Brora, Boat of Garten, Fortrose and Rosemarkie (one course), and Cruden Bay, along with sightseeing in the Highlands (and visiting a distillery or two). If it turns out like I want, it will be 11 days or so, and I know all sorts of strategies to keep the cost down while still playing enough golf.

We’ve traveled a lot over the years but our favorite trip (by far) was Scotland. Wonderful people. We spent time with our sister in laws family in a small town for several days. We also played golf there. Cold, windy and wonderful. My only advice is to stay away from Haggis. And bring warm clothes.

Cold, windy and wonderful. My only advice is to stay away from Haggis. And bring warm clothes.

Yep, that’s what I’m anticipating. Warm clothes and rain gear. And I’m rather adventurous/omnivorous at dinner time, so I wouldn’t rule out haggis. Probably will stay in bed and breakfasts; Scottish breakfasts are legendary (and a good reason to skip lunch) and B&Bs are generally cheaper and friendlier than hotels.

We spent about half our time at B&B’s. Wonderful breakfast for sure. Maybe not the black pudding.

As you are probably aware, a tee time for The Old Course can be pretty difficult to obtain. However, tee times for the New Course (opened in 1895) and Jubilee (opened in 1897) are often available. In fact, a wayward shot from the New Course at the proper moment will allow you to actually play from the Old Course for no extra charge. My personal favorite location is Kingsbarns Golf Links, about 7 miles from St. Andrews. Carnoustie Golf Links is a bit of a drive from St. Andrews, but is worth the trip. Yeah, it is a challenge.

Went there in 2000. Played a round on the putting green at St. Andrews. Also played on some
average country course somewhere in that beautiful country. Sampled the finished product at the Glenlivits(sp?) Distillery. Sired my youngest child on the Isle of Sky. Really nice place. Only drawback, was no one speaking English.

You can apply for tee times in 2023 in mid-September of this year, which is why I’m working on this so early so Dr. Omaha can get his schedule set and I can apply for specific dates. Chances of success aren’t super great, but not zero. If you’re successful, you are also required to book a time on one of the other courses; there are 6 others controlled by the Links Trust (many people don’t know that the Old Course is a muni, it’s closed to golfers on Sunday and serves as a public park for the day). Some of these spots reopen during the fall as people change plans, don’t pay, etc.; you can reapply in January.

Option 2 is once you get to St Andrews, put your name in the daily lottery for tee times (apply Tuesday for Thursday, etc.). Usually if you do that for 2-3 days you’ll get on; play one of the other courses until you do, or other area courses such as Crail or Kingsbarns. No second course required.

Option 4 also works well; find a local who plans to play the course and will put your name in the separate local lottery to play with him/her. There is less competition for times in the local lottery. Then there are the other, much more expensive options where a tour operator or hotel gouges you.

I’m assuming you are driving a rental car? Don’t do the highlands tour in a tour bus…it was terrible and slow…I’d much prefer stopping and seeing stuff at my pace.

Yep. There’s a UK rental agency that is considerably cheaper than Hertz/Avis/etc. One of the tips I’ve found to save money. No tour bus for me…

We rented clubs when we played in Scotland since it was not the main focus of our trip. If you plan on playing quite a bit……bring your own clubs. The rental clubs we received were not good.

I’m still debating that. The cost to send your clubs on the plane has skyrocketed (roughly $100 in each direction). But for as long as we’re gonna be there, renting clubs is equally as expensive. The rental company in Edinburgh promises new TaylorMades though, the model I considered buying. The other issue of course, is does the airline actually get your clubs there on time and undamaged? A golf trip with no clubs kinda defeats the purpose.

From people I’ve talked to, it’s especially bad if you get to Scotland through Heathrow (AA/BA), or Amsterdam (Delta/KLM), or Munich/Frankfurt (United/Lufthansa) and don’t have at least a 3 hour layover at either one; chances are very good you’ll arrive clubless. So I’m focusing airline search on those flights direct from the US without the Heathrow/Amsterdam/Germany stop. Of course I really need dates from Dr. Omaha to do that, but I’m getting the idea of what’s available, how much it costs, etc. But if I have to bake in the Heathrow stop with a three-hour layover, I can.

Went with wife and friends in Oct. 2017 but only spent 2 days in Scotland. I unfortunately didn’t have time to play a round but took an hour and a half just to go over and view/breathe some St. Andrews air.
Very impressive.A steady heavy mist coming off the north sea made the weather less than perfect because I sure wanted to play a round. We went again this year.In fact, just got back 3 weeks ago after staying a week in London and then 4 days in Edinburgh but again more history tourism than personal pleasure. And the weather in Scotland this time was amazing averaging 65-72 partly cloudy or partly sunny and of course a steady breeze.
The flight going over wasn’t too difficult but coming back and having to go through customs in Chicago trust me you’re not going to like. Much less the almost 3 hour process that it takes.
p.s. It was amazing that I met 2 separate Razorback Fan families this trip. One while visiting Windsor castle ( YES we called the hogs at Windsor castle!) and the others on our flight back to America. WPS!

I’ve done the customs thing coming and going. Part of the problem with Heathrow is you have to go through customs there before connecting to Edinburgh or whatever. Then I’ve done customs at Newark, DFW and Atlanta. They all suck.

If you’re expecting good weather on a Scotland golf trip, you’re probably going to be disappointed. Take rain gear, sweaters, winter gloves, ski caps, you name it. And an extra pair of shoes.

Have a great trip…we went on a alumni trip several years ago and we were on a tour bus. We loved Scotland and would go back in a heartbeat. I don’t play golf but we did go to St Andrew’s and watched them setting the grounds up for the women’s open. Looks like a great course. I remember buying my golfing buddy an “official cap”…it was over $40….knock offs were much cheaper but didn’t have the official logo. We stayed in Inverness. I wanted to fish for Salmon which were running up the river and found out fishing rights were deeded away sometimes centuries ago. A club member would take me but the cost was over $2,000 per day. Needless to say I didn’t fish. I guess I should have took up golfing.

The Scots appear to be very efficient at separating American tourists from their money. Fifty years ago you could play the Old Course for 5 pounds. Yes, I said five. Now it’s 270 pounds from April to October. The “bargain” time is January-March, when they make you put a piece of Astroturf down and hit off that so you don’t leave a divot in the fairway. Mat golf only costs 98 pounds.
Is the course 54 times better now than it was in 1972? Of course not. Is the demand 54 times higher? Probably.
The good news for me is that after Brexit, the pound has taken a nosedive against the dollar; currently a pound is $1.22. They don’t seem to be anywhere near solving the problems of Brexit, and they’re also worried about a recession, so I’m hoping that continues at least until I go.

I’ve thought about a train trip, and a lot of the courses I want to play are near train lines. But not all. Cruden Bay, for instance, was built along a railroad spur north of Aberdeen, but the spur hasn’t been in use for a long time.

My first visit to UK was actually by train. I was attending a medical conference in Brussels, played hooky from the conference on Sunday morning, walked to one of the train stations, bought a Eurostar ticket to London Waterloo Station for like $30, rode over there, walked around central London for 3-4 hours, walked back to Waterloo and caught the train back to Brussels. And the Eurostar route goes through France, so that’s still my only “visit” to France. Saw a lot of villages and sheep in both France and southeast England.